For all the latest articles...
select a category
Advertise Your Business

Ian’s last walk for 2021 follows in the foot-steps of legions of Roman centurions and starts in waterfall country at Ystradfellte. It is one to blow the Christmas cobwebs away, but, be warned it can be a bit wild and

The Egypt Centre, Museum of Egyptian Antiquities is home to the largest collection of ancient Egyptian material culture in Wales and is situated beside the Taliesin theatre on Swansea University’s Singleton campus. Consisting of almost 6,000 objects primarily from the

This month Private Chef Christos shares his recipes and tips for side dishes to accompany your Christmas roast. These can all be prepared ahead of the big day, leaving you more time to spend with the family and not stuck

Following a rare year off in 2020, the first time since the Second World War that panto has been cancelled, the curtain will raise once more on Swansea’s most-watched theatrical show on Friday, December 10 with fairy-tale favourite Snow White

If you’ve ever wanted to get away from it all for the yuletide and do something a little less conventional, then you’re not alone. A few years ago Bay’s Nick Smith decided it was high time to break the mould, 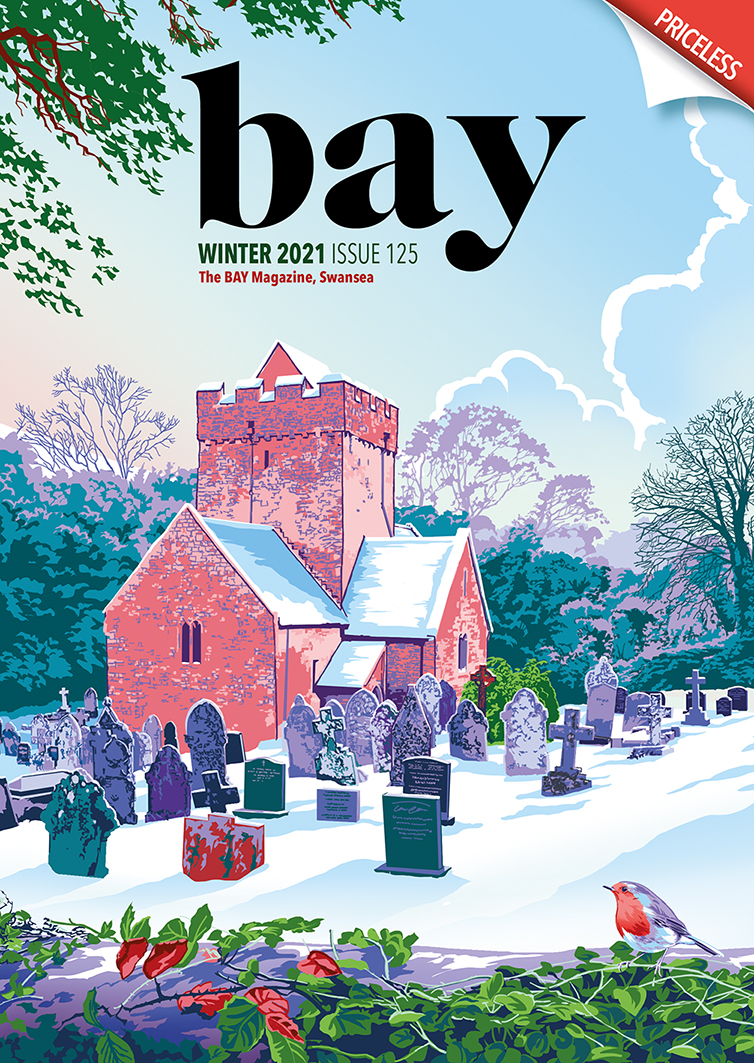 At the end of each year, I like to look back on the articles we have published, and just by going onto our website or picking past copies of the magazine up, I can see the amazing subjects that our fabulous contributors have covered. I’d like to take this opportunity to give a huge shout out to our contributors who make this magazine what it is. Did I mention that we’d one the accolade of ‘Best Lifestyle Magazine in Wales’ – yes I’m sure I probably did – it was all down to the content. I also want to give a big thank you to all our advertisers, some of whom have been supporting us for the whole 12 + years that we have been publishing – without them we wouldn’t have a magazine. And thanks too to our loyal band of deliverers, without them we wouldn’t be able to publish the magazine as the current rules say that magazines can’t be left in the usual pick up places like cafes, doctor’s surgeries and hairdressers. And last but certainly not least a big thank you to YOU – our readers who use the services of our advertisers, which is why they continue to support us.

Right, what have we got in store for you this month? Private Chef Christos shares his favourite accompaniments to a festive Christmas lunch, with the biggest pig in a blanket that I have ever seen. And when you’ve finished eating turkey and mince pies, Ian Bateman has a great way to burn off those extra calories with a walk in the footsteps of a centurion.

Christmas is all about traditions and in our house, we always know that the festive season is upon us when we go to the pantomime in the Grand Theatre. This year’s theme is Snow White and the Seven Dwarfs, but for us it is Mr Panto himself that is the main attraction – the inimitable Kev Johns’ pantomime dame, with her outrageous hats and dresses. Our Arts and Culture vulture, Mark Rees met up with Colin Jackson who will be donning something sparkly when he makes his debut pantomime appearance at The Grand in December.

Now that travel restrictions are slowly being lifted and we are able to plan holidays again, some of you may well be going away for Christmas. Nick Smith recounts the year when he eschewed tradition and spent time in Goa with his family. Most holidays start off with a car journey, whether to an airport or a train station, but Kim Jones and his partner Tracey began their recent trip to Scotland by bike. They left their home in Brecon and cycled all the way to London to catch the overnight train to Glasgow.

It’s funny how some things just fall into place at the right time isn’t it? I was contacted by creative writer Rebecca Spruce, who wanted to draw my attention to an amazing lady who was instrumental in setting up the Egypt Centre in the university. In the same week I was contacted by the Egypt Centre who wanted to promote their workshops, which led to a really interesting article.

Charles Wilson Watkins has been digging about in the censuses again, and has come up with some information on the inhabitants of our cottage in Sketty. The last census for some time is going to be made available soon, this one dates from 1921. The 1931 census was destroyed in a fire and there wasn’t one in 1941 so the next one isn’t until 1951 – I doubt that I’ll be around for that one. Our cottage is a two up two down, all the rooms are identical in size 13 x 8 foot. The 1891 census shows that there are nine people living here. I will never complain again about not having enough wardrobe space. Charles is offering readers the opportunity to find out who was living in their house in 1921. Remember that your house has to be at least 100 years old to be able to do any research.

Well that’s it for another year, I wish you all a very merry Christmas and a happy and healthy New Year. See you in February.