“I knew you were coming, I heard you!” It doesn’t matter where you go in Maserati’s Granturismo S people will know you’re on your way. Even before they get to see it’s Pininfarina styling they’ll here its delicious exhaust note and wait, and watch.

It’s all because of a little button mounted just to the left of the alcantara covered steering wheel high on the carbon fibre dashboard marked Sport:  It helps the S make all the noise. By pressing something slightly smaller than a 5 pence piece you can open two pneumatic valves in the exhaust system that not only unleash another 10bhp but also allow the gases a quicker more, free flowing exit. That little button makes all difference. With the valves closed the Granturismo has an all 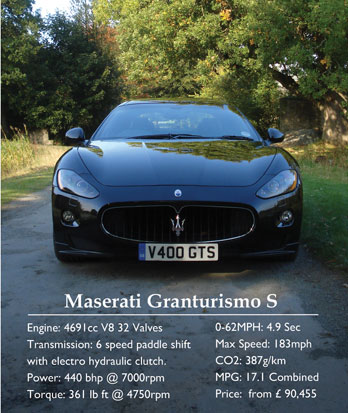 Italian V8 grumble that  any car fan would love. With the valves open one of the most powerful road-going Maseratis you can buy produces the kind of noises that can stir the soul. Of course the 4.7litre 440bhp V8 that’s identical to that fitted in Alfa Romeo’s 8C complete with red cam covers and a rev limiter that’s been raised to 7,600rpm helps too.
The Granturismo S isn’t just a noisy show off though. Because you can choose to shut those valves you can quite easily carry four people in hushed comfort. The back seat passengers will have slightly less head room than in other four seater grand-tourers but they’ll fit none-the-less. And as long as they don’t bring too much luggage – the boot is a tad small- and they should find the leather and alcantara trimmed rear quarters surprisingly comfortable. Up front the comfort continues, both driver and passenger get high backed, electrically operated leather trimmed seats which at first seam a little hard but you soon realise they’re actually perfectly accommodating and very supportive. You do notice as a driver though, that you feel like you’re positioned a long way over to the right, which together with the Granturismo’s width and thick “A” pillars, at first makes it difficult to place the car. However because the view down the long bonnet is dominated by the front wheel arches you soon adjust and whilst  the steering maybe a little lighter than expected and would benefit by offering more in the way of feedback it’s never anything but precise. Reversing is made all the more easier thanks to parking sensors.
But surely something built in Modena isn’t meant to be too practical. After-all steam roller sized 285/35-ZR20 tyres, 0-60 in 4.9 seconds and a top speed of 183mph put the Granturimso very nearly into super-car territories? Yes, but despite its size the big Maserati never feels intimidating. Whilst it’s true to say the S can cover ground at alarming rates if necessary, it can also become a relaxed tourer. Wind and tyre noise are kept to a minimum and body roll, despite the Granturismo’s 1880 kg kerbweight, is kept in check. There’s no need to work the engine hard either as the six speed electronic-actuated gearbox will change gears for you and the 362lbft of torque makes over-taking effortless.
If, on the other hand, you feel you’d like to work a little harder yourself you can swap ratios by using the two long, slender carbon fibre, column mounted paddles.  The right one changes up, the left one changes down, it also blips the throttle automatically convincing bystanders you’re heel and toeing as the exhaust emits a series of glorious pops and cackles whilst the 6 pot calliper, 360mm Brembo brakes do their utmost to rub off speed.
At £90,455 upwards the Granturismo S is anything but cheap – even when compared to similarly exclusive and arguably better built competition, But there’s something about the sinister looks, especially in the black MC Stradale finish of our test car coupled with the subtle carbon fibre sill extensions and rear wing as well as the blacked out grill, window trims and headlamp nacelles that takes an already handsome shape and turns it in to something special. After seeing one you’ll talk about it for days, after hearing one you know you’ll remember it forever.
Maserati Granturismo S
Engine: 4691cc V8 32 Valves
Transmission: 6 speed paddle shift with electro hydraulic clutch.
Power: 440 bhp @ 7000rpm
Torque: 361 lb ft @ 4750rpm
0-62MPH: 4.9 Sec
Max Speed: 183mph
CO2: 387g/km
MPG: 17.1 Combined
Price:  from £ 90,455
Many thanks to Maserati’s UK’s Press Office for the loan of the Granturismo S.
All Articles