Advertise Your Business
Since its launch in 1983 Mitsubishi’s Shogun has become a familiar sight on our roads and indeed our un-tarmaced areas too. With its upright windscreen, chunky styling and balloon-like tyres the Shogun makes no apologies for being a proper 4×4 and rumour has it, was the inspiration for Land-Rover’s Discovery. It is said that upon seeing the Shogun, engineers in Coventry realised there was indeed a market for something that fitted squarely between the no-nonsense Land-Rover and their increasingly up-market Range-Rover. It was the Shogun after all that gave the world its first all forward facing seven seater off-roader in 1985.

Today the Shogun is one of the world’s highest selling 4x4s used by emergency services, farmers, and trailer towers the world over, all attracted to its capabilities when the going gets tough as well as its manners on-road too and it’s because of that combination that it’s sold so well. But now everyone is much more environmentally conscious than they were back then, is the Shogun still a wise choice?
2010 saw a host of changes for the Shogun, which Mitsubishi say, still make it a contender in a fiercely competitive market place. Since the Shogun’s inception more and more manufacturers have tried to get in on the big 4×4 act. Obvious competition comes from the Discovery and also Toyota’s Land-Cruiser, but has Mitsubishi done enough to take on what are arguably more modern feeling contemporaries? 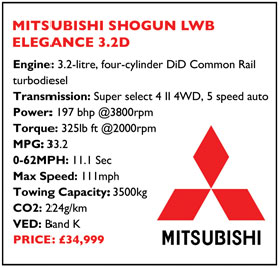 Probably the biggest changes have taken place in the engine department. The 3.2litre 4 cylinder diesel, the only option available to UK buyers, is now 20% more powerful at 197bhp, and also 20% more efficient due to a host of revisions including a newer alternator and reduced idling speed. The ride height too has been lowered by 15mm at the front and 10mm at the rear which, claim Mitsubishi, contributes to better aerodynamics. You’ll be hard pressed to notice any differences though until you have to pay road tax. These subtle changes have reduced the Shogun’s CO2 emissions from 280g/km to 224g/km meaning a saving of £400 a year. Another upside is that torque increases from 275lbft to 325lbft meaning the Shogun can now tow up to 3500kg or, un-coupled, sprint to 60mph from rest in just over eleven seconds.
On the road the Shogun never feels as big as it is. The high driving position means visibility is good in nearly every direction – if the rear-most seat is unfolded views  backwards are virtually non-existent (fortunately the reversing camera makes up for this) – and body roll is kept in check too. On a sweeping road the Shogun can be punted along quite easily allowing reasonably rapid and acceptably comfortable progress.  However on twistier roads the 5 speed automatic tends to hunt for ratios, never seeming to find the right one, and as you switch from corner to straight and back to corner, the engine revs rise and fall like a trawler on a heavy tide turning the whole experience into both a noisy and tiring one, where progress never seems truly relaxing
But it could be argued that the Shogun’s natural habitat is not on the asphalt. Despite its leather lined 7 seater interior, logically laid out dash and 30 GB sat-nav and audio system the Shogun was designed for serious rough and tumble off-roading. Alongside the chunky gear selector lies another, just as robust, smaller lever that allows the driver to select permanent four-wheel drive or lock the differentials, meaning the Shogun can haul itself out of nearly everything you decide you want to drive through, or indeed, up, or over. With its short overhangs both front and rear  as well as a digital trip computer that combines an altimeter, barometer and digital compass there is no doubt that this is a serious 4×4 not just a dressed up suburban pretender.
It’s because of this that, to some, the Shogun will feel un-refined and slightly dated, to others though it will offer the perfect mix between luxury car and serious, no-nonsense workhorse. People who buy Shoguns buy them for reason and there’s no reason why, if Mitsubishi keep building them like this that they won’t keep buying in the future.
Many thanks to Misubishi UK’s Press Office for the loan of the Shogun.
All Articles