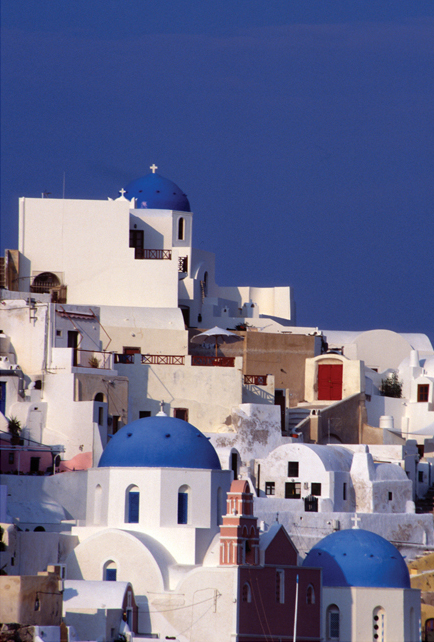 One of the most spectacular Greek islands is Santorini, which is the only inhabited volcanic crater in the world. White-washed houses and blue-domed churches shimmer in the sunlight. The terraced villages look like tiers of a wedding cake as they cling precariously to the cliff edge.
The shimmering azure waters of the Aegean gently lap the small ports and beaches, lying at the base of the crater. The island was once circular; around 1650 BC a volcanic eruption caused the centre to sink leaving a crater with high cliffs – a dramatic geological sight.
Today Santorini forms the main island. There is also the smaller island of Thirassia and two uninhabited islets Nea Kameni, the active volcano, and Palea Kameni.
It is a place steeped in history with ruins telling a story of lost civilisations. In 1967 excavations began at Akrotiri, which are still in progress – revealing a Minoan town preserved beneath the layers of volcanic ash for 3000 years. Buildings some three stories high date to the late 16th century BC. Frescos and ceramics that have been uncovered can be seen in the Museum of Prehistoric Thera in Fira. 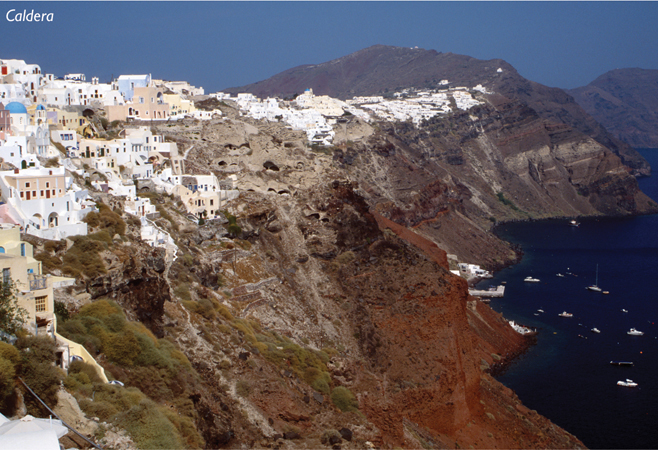 Fira the capital and the village of Oia are perched high above the sea on the lip of the caldera. The dwellings are nestled into the cliff face cut out of the volcanic rock. The expensive boutiques and jewellery shops of Fira cater for the passengers of the  many cruise ships which sail into port. A climb of over two hundred steps, a seat on a donkey or a ride in the cable car brings visitors up to the town.
If you arrive at Oia by sea the same fate awaits – minus the luxury of the cable car. The port of Ammoudi has excellent fish tavernas and colourful fishing boats tied up at the quay. Oia is more laid back, a kind of hippy village. There are many galleries and craft shops selling glass, ceramics and jewellery. It is also famous for its colourful sunsets watched from the romantic terrace restaurants and coffee shops.
The narrow streets are crowded in the evening; the most popular spot to watch the sun go down is the Kastro walls, an old fort. A party-like atmosphere reigns as everyone anticipates the setting sun, cameras poised to capture the moment.
Viewing Santorini from the water offers a different perspective. An ideal way is aboard the King Thiras, a beautiful traditional boat that resembles an 18th century flagship. The cliffs of the caldera tower above, formations of multi coloured layers of lava and pumice. Precariously on the rim, picturesque villages rise outlined against a deep blue sky.
The boat sails on to Nea Kameni where a steep half-hour walk leads to the crater of the still active volcano. Then to the second lava islet Palia Kameni so visitors can relax in the hot springs after their arduous walk. The boat drops anchor and turns into a diving platform offering an opportunity to swim in the green sulphur waters or cover your body with the warm therapeutic mud. 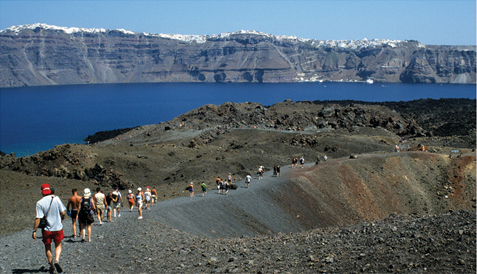 Though Santorini’s mainstay is tourism there is another thriving industry, that of wine. There are about forty grape varieties cultivated on nearly 4,000 acres of the Santorini vineyards. The vines provide a hint of green against a barren landscape. Grapes thrive in the volcanic soil. An ancient technique of vine-shaping is used: curled up in a basket shape the grapes are safely grown in the centre cocooned against the wind and sun. Several wineries offer tours and the wine is served throughout the island’s tavernas.
There are many beaches situated on the east side of the island. Perissa, a beachside village, has fine black sands. From there you can go by boat to Red beach so called because of the coloured cliffs and pebbles or Kamari with its waterfront bars. If you hire a car or scooter there are many other deserted beaches to explore.
As day turns into night the setting sun casts its shadow across the whitewashed houses, lamplights begin to flicker through the narrow streets and families come together for their evening meal. Santorini is an island at peace. It masks a turbulent past as even to-day minor tremors are common, but the locals go about their daily tasks unworried about living life on the edge of a volcano.
All Articles