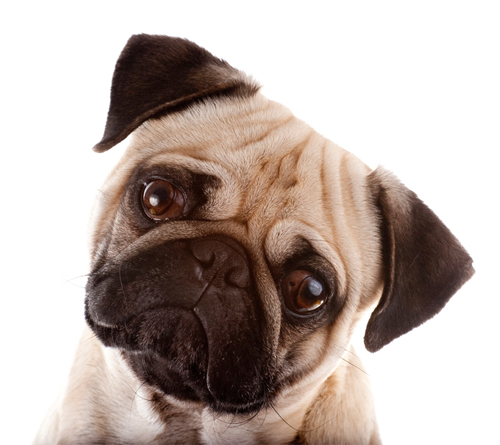 This month Geraint Jones looks at eye problems in our pets and has a salutary warning to WAGs with the customary little dogs in their designer handbags!
Veterinary medicine is a funny business! You may not have to treat an animal for a particular ailment or condition for a number of months or sometimes even years and then a whole host of them come in through the door, usually within days of each other. One of my colleagues is going through a spate of cow caesareans, mostly late at night much to her displeasure. Another seems to be constantly operating on dogs with “foreign bodies” and performing gut resections. Somehow recently I have found myself dealing with a number of animals with eye problems! In the last week I fished out a thorn from a whippet’s eye and a seed hidden behind the third eyelid in a puppy. Veterinary ophthalmology tends to be a sub-speciality in itself within the profession, but vets in general practice see and deal with more common presenting eye conditions on a daily basis- hence the subject for this month’s Bay’s veterinary serving.

One of the most common eye conditions we probably see with both cats and dogs is ulceration of the surface of the eye (the cornea).  This is usually diagnosed by putting a dye into the animal’s eye and identifying whether the dye is taken up by any areas of the surface of the eye under ultra violet light. As long as the ulcers are superficial they will tend to heal by themselves or with topical antibiotics, but are obviously a source of pain and discomfort to the animal.
Occasionally some ulcers will fail to heal and require the surface layer of cells to be removed with a cotton bud, and the ulcer excoriated with a needle. This procedure can be done under local topical anaesthetic or under sedation and is not for the faint hearted or the vet with Parkinson’s…

Most cats fight dirty! -Unfortunately for the victim, it’s not a kick to the crotch, but more of a swipe to the cornea. Cat scratches tend to be seen in cats following a run in with the local SAS-trained moggy that lives next door, or in the bumbling Labrador puppy that just doesn’t understand why the geriatric, arthritic cat it shares its house with doesn’t take well to being ridden.  Deeper corneal ulcers and also ulcers that are badly infected often require surgery, the aim of which is to create a graft from the tissues around the eye, to provide a protective covering for the ulcer whilst it heals.

Conjunctivitis is also quite a common presenting aliment in both cats and dogs. Cats in particular are susceptible to infectious conjunctivitis. These can be bacterial or viral in origin. Viral conjunctivitis tends to be more severe and is usually associated with respiratory signs and “cat flu”. One of the bacterial causes is feline “Chlamydia” which on discussion, never fails to produce a set of worried questions from an owner about how the cat could have possibly caught an STD?! (Fortunately for owners this is not the same as the human equivalent). Conjunctivitis can also be allergic in origin, but this is usually associated with other signs such as ear, skin or gastrointestinal disease. Most infectious conjunctivitis tends again to respond to topical and or oral antibiotics.

As they become elderly cats and dogs can develop cataracts. In essence this is a progressive clouding of the lens in the eye which hinders light travelling through the eye to the retina behind. Animals can become gradually blind. This becomes especially apparent with the animal bumping into objects during low lighting conditions- in the early morning or at dusk. Cataracts tend to be an inherited condition, but other causes e.g. diabetes are also important.

Various dog breeds also present with eye related issues due to the conformation of their head and due to their way they have bred over the years. In-turning of the eyelids or “entropion” affects breeds such as the Sharpei, Chow, and Cocker spaniel. This condition requires surgical correction.
Breeds such as West highland terriers suffer from a condition called “dry eye” where the dog’s body produces antibodies which destroy the glands that produce tears.
Finally, toy breeds such as Pugs and Chihuahua’s have quite bulbous eyes and very shallow eye sockets. This makes it relatively easy for their eyes to fall out or prolapse. When they do fall out they are very hard to get back in (even with a shoe horn*), some advice that owners should take heed of if they are juggling with them in and out of their handbags!!
If your pet has been affected by any of the above issues please make an appointment to see your vet or if in any doubt ring 01792 205000 for some advice.
Article by Geraint Jones: – St James Veterinary Group       web address www. stjamesvet.co.uk
[* I’m not being serious, we would never use a shoe horn – it’s too difficult to sterilise]
All Articles