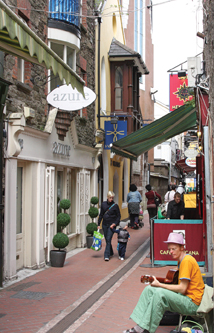 After many years absence from the local coastline the Swansea to Cork ferry now managed by Fastnet Line has entered its second year of operation. The MV Julia offers a comfortable, stress free way to travel across the Irish Sea. As more people take short breaks and want to avoid wasting time in airport terminals the obvious preference is to board the ferry (either as a foot passenger or with the car), check into a cabin, have dinner and a drink in the bar. You could also visit the on board cinema or have a flutter in the casino before going to bed and waking up the next morning approaching the coast of Ireland.

I did just this recently.  My  first sightings of Irish soil were the rainbow houses of Cobh which rise along the hillside of Cork harbour, one of the largest natural harbours in the world. The colourful town has a strong maritime tradition and links with the Titanic but I would not be uncovering that story on this trip as after a day in Kinsale (see business section) my destination was Cork.

The ferry terminal is situated in Ringaskiddy, twelve miles from Cork city, just a short drive along the N28 – a very straight forward route. I drove into a convenient underground car park beneath the Clarion Hotel at Lapps Quay which was to be my home for the night. This contemporary hotel sits on the banks of the river Lee and faces the impressive architecture of City Hall. It is an ideal location to explore the city, only two minutes walk to the shopping centre, business district and a host of restaurants and bars.

After a good night’s sleep and a hearty Irish breakfast, it was time to explore. Cork was recently listed as one of the Top 10 places in the world to visit by Lonely Planet. It grew out of a medieval marsh and today’s city centre is built on an island, the two channels of the river Lee which hold the city within its grasp are criss-crossed by twenty two bridges. Though it may be the principal city and administrative centre of County Cork it has a continental feel with river walks, street side cafes and a traditional live music scene.

The streets hum; it wasn’t even ten o’clock in the morning and I could hear the notes of a penny whistle trailing along an alleyway. Music became the backdrop to my visit, the spirited rhythm of street musicians are one of the city’s charms.

As I carried on walking down Oliver Plunkett Street I saw the signs to the English Market, which recently made news headlines when the Queen toured it on her visit to Ireland. The market has been trading since 1788 – one of the oldest of its kind. Long established family butchers, fishmongers and bakers selling traditional Irish soda bread stand alongside stalls of organic vegetables, handmade chocolates and various European delicacies. The quality of food was excellent and so was the friendly Irish service and more importantly I had found the ideal lunch stop.

Though before that time arrived I wanted to discover more of the City, the best way is to take a sightseeing tour. I boarded a double-decker bus outside the Tourist Information Centre on Grande Parade. The Cork City Tour takes about an hour and a half, pickups are every 45 minutes. It is possible to hop on and off the bus if you want to stay longer at any of historical landmarks as the ticket is valid all day. I paid the driver and was given a map so I could follow the recorded guide which provides details of points of interest along the route.

One of these is Cork City Gaol, a restored prison furnished with life-size wax figures, captivating sound effects and displays which reveal the history and lifestyles of 19th Century Cork. Fitzgerald’s Park has colourful flower beds and Cork Public Museum traces the story and treasure of Cork’s past. There is also St Anne’s Church, whose steeple is 37m high and dominates the Cork skyline. It is famous for the chime of 8 bells which together weigh over 6 tonnes and which visitors are invited to ring.  Nearby is the Cork Butter Museum which tells the story of Ireland’s most successful food export.

And never far from sight as you pass back and forth over the city’s bridges is St Fin Barre’s Cathedral. Designed by William Burges and consecrated in 1870 it is built on a site which has been used for worship since the seventh century.  On the sanctuary roof stands a beautiful gold coated statue the “Resurrection Angel” a stark contrast to the grey stone cathedral. Should you want a closer look at the interior – which is reported to be equally spectacular – the bus stops conveniently outside on Bishop Street.

Alternatively you can follow the signposts on a self guided walking tour around the city;  maps are available from the Tourist Information Centre. On foot you can walk up and down the hilly streets and take a peek at the colourful houses in the older part of town, stop off for an obligatory pint of Guinness in one of the neighbourhood pubs, discover the 17th Century alleyways with unique local shops or visit St Patricks Street for familiar high street stores.

On my trip I only scratched the surface of what the city has to offer. It is vibrant, oozes warmth and character and brings together traditional and modern   architecture and culture. It offers plenty to interest all visitors and an ideal base to discover the largest county in the Republic of Ireland.

Fact File
Swansea to Cork Ferry www.fastnetline.com
The MV Julia has capacity for 1,500 passengers, 350 cars, and 40 trucks and has 300 cabins on board. You can dine in style, eat informally or grab a snack with a choice of three restaurants to suit all tastes and budgets. There is plenty to do for all the family with a cinema, children’s play zone, a casino, shop and a visitor information centre.
The service offers comfortable overnight sailing six nights a week (Tuesday, Thursday & Saturday from Cork and Wednesday, Friday & Sunday from Swansea) departing generally at 20:00 and taking approximately twelve hours. These times can vary due to tidal conditions in Swansea but these are advised at the time of booking. There are additional sailings in the high season from July 10th until 28th August. These comprise of an additional Sunday day sailing (09.00) from Swansea, a Sunday night sailing from Cork and a Monday night Sailing from Swansea.

Many thanks to Fastnet Line and The Clarion Hotel 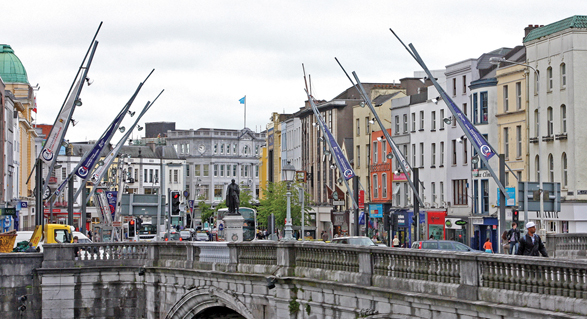