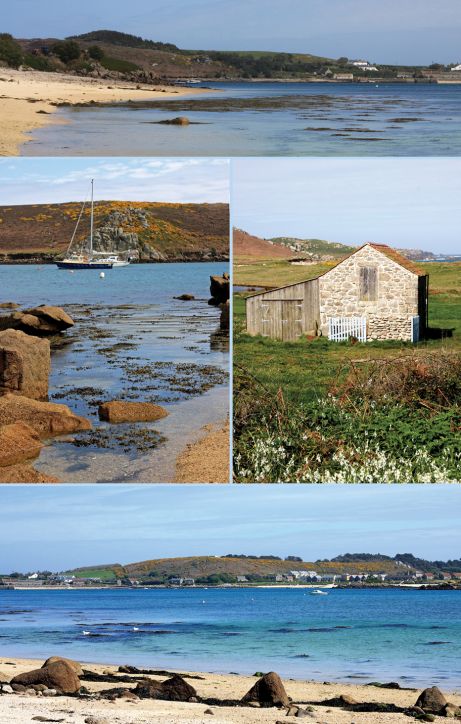 Bryher is the smallest of the five inhabited islands of Scilly. It is noted for its unspoilt natural beauty, its maram grass-edged sand dunes and transparent turquoise blue water. One side of the island is very wild with waves that roll in from the Atlantic, crashing across the shores of Hell Bay. In stark contrast are the glistening white sand beaches of Green Bay where perky little Oyster Catchers dart along the shore. With a population of about 80 people the mood is very friendly. Roads are few but you can follow the tracks across the island with no fear of getting lost.

On such a tiny, remote place I uncovered a surprising local connection. While exploring the island I discovered an old boat shed converted into an art gallery and workshop. It was owned by local artist Richard Pearce whose dramatic abstract seascapes in indigo, cobalt and deep marine blues can be seen in galleries around the islands. I’d already decided that I had wall space at home for a piece of his work if it was within my budget.

Shafts of light streamed in from the back of the studio which was glass from floor to ceiling with an unbroken view of the sea. Wooden shelves lined the boat shed displaying a selection of greeting cards and prints for sale, alongside original pieces – far too big for my walls and also my purse. There was no sign of the artist only a note with the words ‘at lunch’ propped against an honesty box

I spotted the print I wanted to take home – but before putting my money into the honesty box I thought I’d just check that his lunch break wasn’t over. As luck would have it, a paint splattered bearded guy was walking up to the studio. We exchanged greetings and he asked where I was from. He smiled when I said Swansea and told me that his wife was from Swansea and that he used to live there!

Richard told me “Caroline came down to Scilly with a friend and worked at the Mermaid pub, this was where we met and I went out with her that summer. At the end of the season Caroline returned to Swansea and I went down to the south of France to pick grapes, something that I’d been doing for several years. However, I missed Caroline and so when I got back to the UK I went to visit her where she was living on Gower. We then set up home together in the Hafod area and I got a job with Swansea Council painting and decorating. Within a year we returned to Scilly on holiday and I was offered a job with a tied cottage on a farm on the island of St Mary’s. Caroline kept goats and worked on a neighbouring farm tying daffodils. Before long our daughter Helen came along. After a couple of years we applied for a tenancy from the Duchy of Cornwall on a small farm on Bryher. Things didn’t go to plan so we rented a cottage on the island and I started painting. This proved to be a good move. We opened our house to visitors to view the paintings and later converted the old boat shed to a studio and we haven’t looked back.

“Caroline loves living here, possibly more than I do and although she loves Gower, she would not consider giving up our island life to return there. Though it holds fond memories – especially Llanrhidian Church where we got married in 1978.

“I was brought up on St Marys, where my family go back many generations. My dad was a fireman but had to retire early and became a woodcarver, although he was also a painter and encouraged me to paint from an early age.”

Richard’s work with the council has probably now faded, but you don’t need to visit Bryher to see his work. He has an on-line gallery and sends his beautiful paintings of his remote island life all over the world.