Swansea’s growing problem Japanese Knotweed (Fallopia japonica) was first introduced to Britain by the Victorians as an ornamental plant. In its native countries of Japan, North China, Korea and Taiwan, the weed presents nowhere near the problem it now poses across Europe. 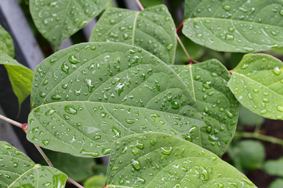 This plant is perennial and extremely invasive.  It thrives on disturbance.  The tiniest piece can re-grow, and has been spread by both natural means and by human activity, threatening the survival of other native plant species and in turn insects and other animal species.

South Wales, and in particular the Swansea valley are the worst affected areas in Britain.  In Swansea alone the infestation has been estimated to cost 9.5 million in chemical treatment and will take approximately 50 years to eradicate, and that’s not taking into consideration any spread to new areas.

Listed in the Wildlife and Countryside Act 1981 as a pest species, all parts of the plant are considered as controlled waste under the Waste Regulations.

And it is not just a garden pest. If  you’re buying or selling property, there are only a few lenders who will finance a purchase if knot weed is present in the garden or in a neighbouring property.

What does Japanese knotweed look like and how to identify it.

In the early spring, red/purple shoots appear from the ground and grow rapidly forming canes. They can grow as much as 10cms a day.  The plants are fully grown by early summer and stand up to 3 metres high.

Japanese Knotweed is capable of penetrating hard structures such as concrete, tarmac, brick walls and foundations.  All of which are reasons why mortgage lenders are increasingly

reluctant to lend on properties with Japanese Knotweed infestations.

I’ve got Japanese Knotweed, what do I do?

Don’t panic!  However, do start to plan how you are going to control, contain or eradicate it.  Here is a checklist of actions:

This is an issue under Common Law and the Environment Agency has no powers in this situation however, here are some don’ts.

Don’t flail Japanese Knotweed as this could cause it to spread.  Cutting with sharp hooks, slashers etc. or hand pulling is recommended to avoid any dispersal of cut fragments.

Don’t cause the spread of Japanese Knotweed stem and crowns.  If you cut down Japanese Knotweed, it is best to dispose of it on site.  Material taken off site must be safely contained and disposed of at a licensed disposal site.

Don’t try to dig up Japanese Knotweed, as this will lead to a significant increase in stem density.  Even a tiny fragment of the cut rhizome is capable of regeneration.

Don’t add Japanese Knotweed to compost.  Compost it separately (preferably on plastic sheeting to prevent rooting) so that you can be sure it is dead before you apply it to land.

Don’t take Japanese Knotweed to recycling centres that receive garden waste, as it will contaminate the compost.

Don’t waste time.  If Japanese Knotweed appears on your   site, treat it immediately.  Don’t allow it to become established.

Don’t break the law.  Remember, if you cause Japanese Knotweed to spread you are guilty of an offence under the Wildlife and Countryside Act, 1981.