If you have ever looked at holiday brochures for Turkey, you will surely have seen the image of Oludeniz, which translates as Blue Lagoon. The lagoon is a national nature reserve, famous for its turquoise waters and its secluded sandy beach.  The resort is also famous for its paragliding opportunities, as the Babadag Mountain forms part of Oludeniz’s amazing backdrop. 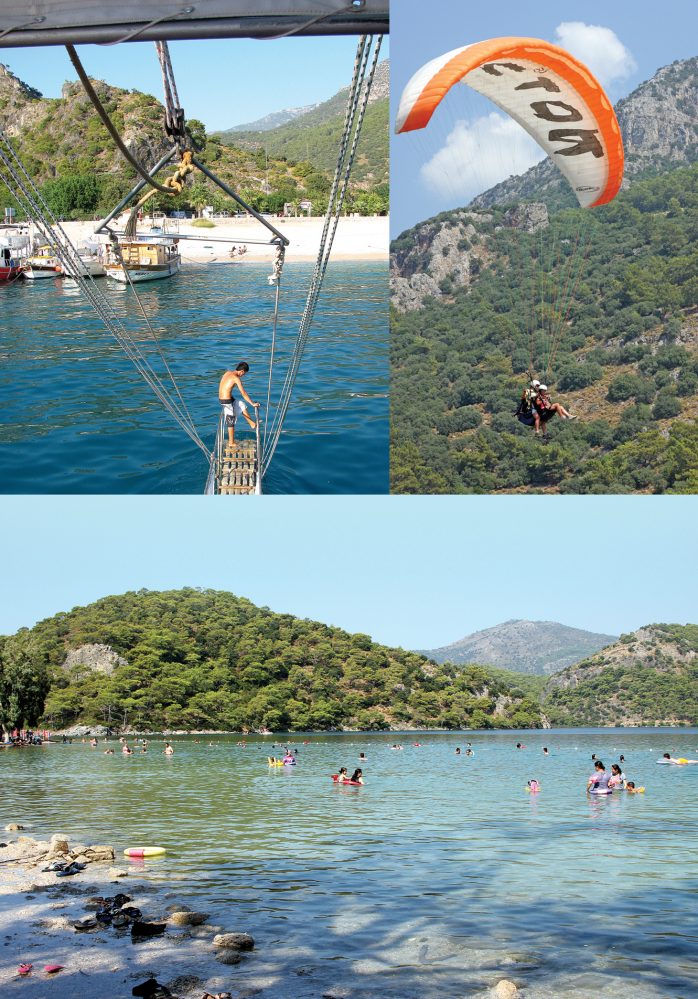 A holiday in this region is a combination of sun, sea, mountains, and lakes. There is also an opportunity to unravel the area’s historical past. It is easy to explore by catching one of the local dolmus (minibus) services which connect the towns.

Fethiye is just 8.5km from Oludeniz. The town has expanded from a trading port and fishing village to a vibrant tourist holiday destination. One of the historical attractions is the Rock Tombs which are clearly visible in the rock faces that overlook the centre. These ornate temple style facades are the final resting place for the dignitaries of the local Lycian society, dating back to the 4th Century BC. It was believed that worthy citizens were taken to the next glorious life by mythical winged creatures, so wherever possible locations above their settlements were chosen. It is possible to walk up to them for a closer inspection.

They can also be seen from the water by taking a water taxi from the seafront in Fethiye across to Calis Beach. A picturesque coastal town, Calis has a very laid back atmosphere with a lovely promenade just perfect for a stroll or a meal at one of the beach front restaurants and bars. It is the ideal location to sit, relax and savour a chilled glass of wine and watch the sun slowly vanishing into the sea.

After all this relaxation you may be in need of some retail therapy. Tuesday is market day in Fethiye, which takes place alongside the canal; white canvas awnings billow in the breeze and cover the locals who bring in their home grown produce to sell: Cheeses, herbs, sweet grapes, large juicy peaches, vibrant coloured peppers, huge tomatoes, lemons and much more, plus the inevitable stalls selling the white icing sugar dusted Turkish delight.

There is an abundance of mouth watering food to sample and great little cafes with coloured plastic tables and chairs to sit at and watch the world go by. 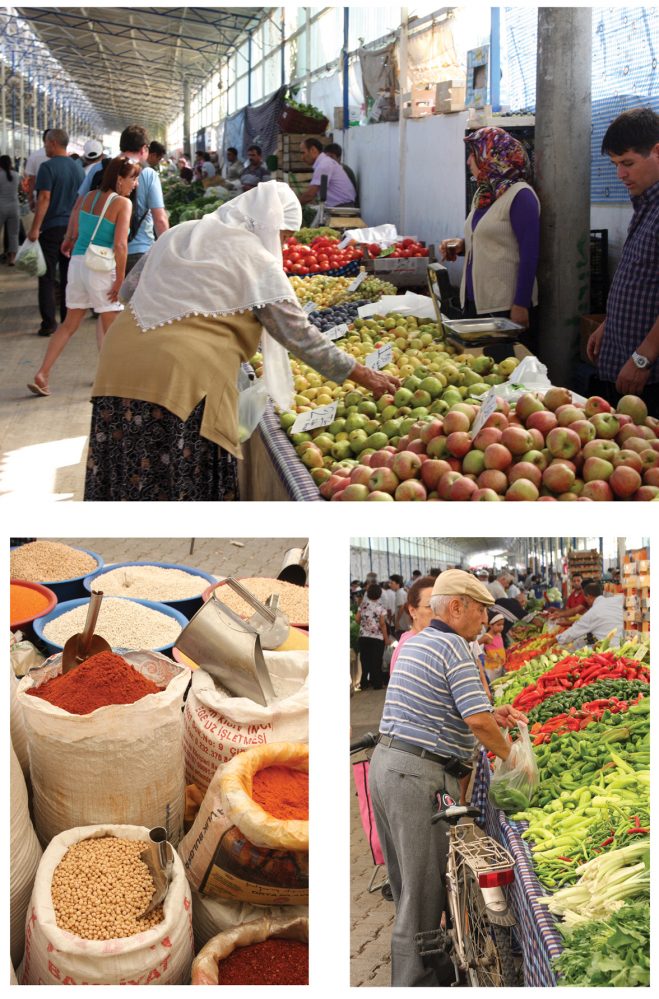 Reading my guide book I had uncovered a tale about an old ghost town called Kayakoy. From Oludeniz I caught a dolmus bus up the hill to the neighbouring town of Hisaronu, a more upbeat party place than our resort. A change of bus and a short drive along shaded pine forest roads takes us to the abandoned Greek village.

Once it was a thriving town of over a thousand houses, two churches, fourteen chapels and two schools. It was left deserted in 1923 when the Greek inhabitants who lived there along with over a million other Greek residents living throughout Turkey were repatriated to Greece. This took place through a population exchange between the two countries following the Turkish war of independence. The village had known signs of life since the 13th Century, and a Greek presence in this region can be traced back hundreds of years. They called the village Karmylassos.

The Turkish government attempted to relocate Turks repatriated from Greece to occupy the village but this failed. Now homes stand empty crumbling back into the earth. Wind blows through door-less frames and the only signs of life are mountain goats wandering along empty streets.  The barely audible sound from a lone bell that hangs from the leader of the herd is the only sound that echoes eerily amongst the decaying walls.

A ghostly silence hangs over this forgotten town, which overlooks the fertile fields of the Kaya Valley. Though evidence of past lives can be seen as fireplaces still stand intact, traces of blue and green paint and the remains of faded mosaics are still visible in Panayia Pyrgiotissa Basilica (lower church).

Kayakoy also has several lovely restaurants, some set in the ruins at the base of the old town. If you want a quiet evening away from the livelier resorts you can easily travel there by bus or taxi.

I really enjoyed my visit to the Turquoise Coast. It certainly has a lot to offer, and I liked exploring the historical sites and visiting the picturesque villages. For my introduction to Turkey it was a great destination to uncover.

Kayakoy has come into the spotlight, since Louis de Bernieres publication in 2004 titled “Birds Without Wings.”

The book traces the fortune of one small community in which Christians and Muslims lived. 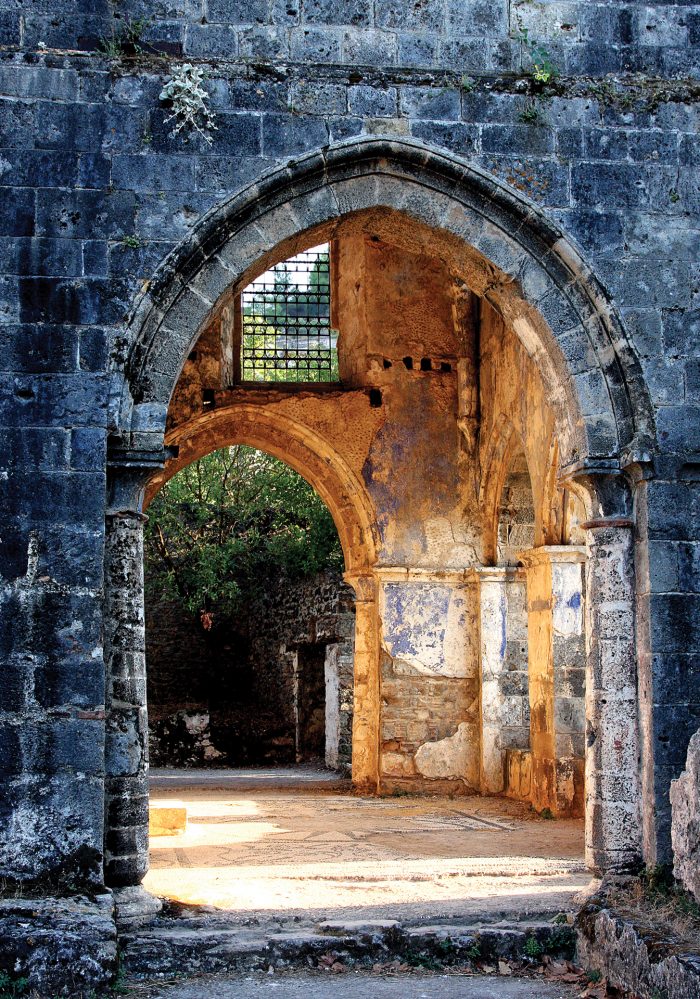