If I was to say the word Porsche to you what would you envisage?

A 911 probably springs to mind first and probably a Boxster too.

But think a little harder what else does that name mean to you?

Do you see images of Le Mans winning 956’ and 962’s or maybe 959’s blasting across the desert on the way to Dakar? What about a little 356 on the Grossglockner pass? Or perhaps your head is filled with pictures of Steve McQueen in white overalls, or James Dean maybe, and his 550 Spider.

The chances are though that none of you will mention four doors and even if you do it’ll be even longer before you say the word diesel. Porsche themselves once released a statement saying that they’d never build a diesel powered car. Funny how things change, isn’t it? Porsche’s Panamera(the name comes from the Mexican Carrera Panamericana road-race) has been with us since 2009. Ever since October 2010 it’s been available as an oil-burner too.

Even when it’s running you have to listen carefully to Porsche’s grand-tourer to determine whether or not it sips its liquor from the black pump. There’s none of the usual diesel “taxi–rattle” to be heard and it’s so smooth you’d easily be forgiven for thinking there’s a multi-cylindered petrol engine under that long bonnet. The only real giveaways are the elegant little badges on the Panamera’s front doors, and a rev-counter that stops at 6 rather than the more usual Porsche-like 8 or 9.

It’s that mix of familiar and the not quite so recognisable that defines the Panamera. On the outside the rounded wing tops, coupe-esque roof line, and wheel arches filled with (optional) 20 inch multi-spoke rims, all contribute to a side profile that despite a longer wheel base and those extra rear doors, is instantly recognisable as a product of Stuttgart

Despite looking like a stretched 911 the Panamera is, unsurprisingly, more limo-like than its famous sibling, and yet in some ways it still manages to feel like a family sized version of the very same car. Its seats – albeit four of them – and five-dial dash are instantly recognisable to anyone who’s ever driven the smaller car; even the view through the windscreen feels familiar, and the whole cabin has the same mix of high quality materials and watchmaker’s-like build quality.

Even in diesel form the performance is everything you would expect from Porsche. But in this instance the 8 speed auto ‘box concentrates more on making use of the 3litre V6’s ample torque than it does its power. The ride too is more comfort focused. The Panamera’s extra length and width, together with its softer steering means there’s no hiding the fact that it’s aimed at a slightly less sporting, more relaxed, clientele. Motorway cruising speeds equate to little more than 1500rpm, making it easy to imagine yourself crossing continents in this car, especially if Porsche’s claims of 745 miles on a single fill-up are to be believed.

By blending the best bits of a tourer, sport-car and to some degree an estate and then fitting it with a diesel engine capable of both performance and economy, Porsche have ensured that the Panamera diesel is virtually without rivals. An S-Class Mercedes lacks its dynamics, Maserati’s Quattroporte its build quality and Aston Martin’s Rapide offers less rear space and commands nearly twice the price. Both Audi’s S5 and BMW’s 5-series seem obvious contenders but they’ll only make your neighbours think you’ve made it to regional management; the Panamera makes you look like the Chairman of the board.

It might not be the obvious choice, but perhaps, if you are looking for a four-seater diesel powered sports-tourer your first thoughts should be Porsche. 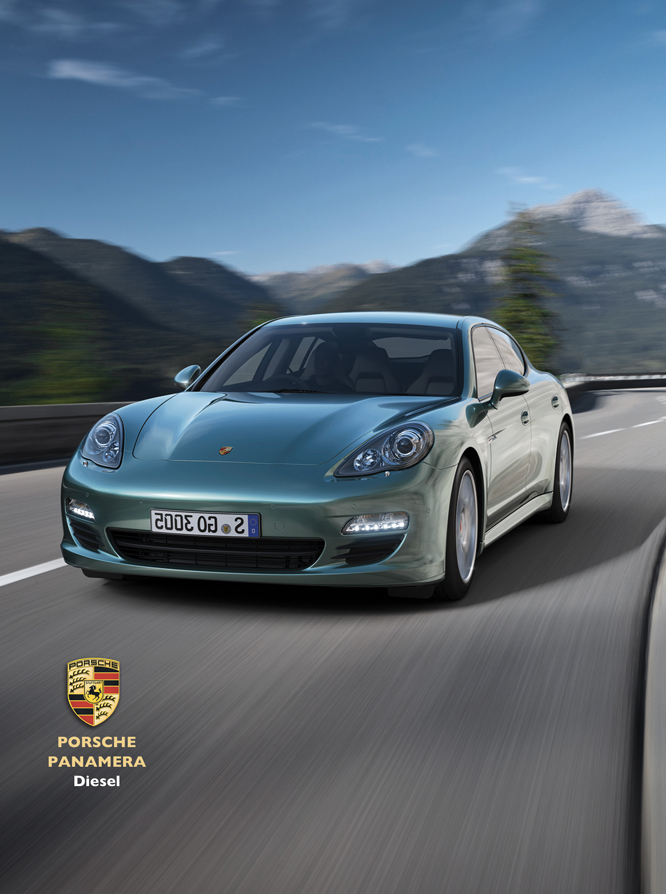 Many thanks to Porsche Cars Great Britain for the loan of their Panamera.