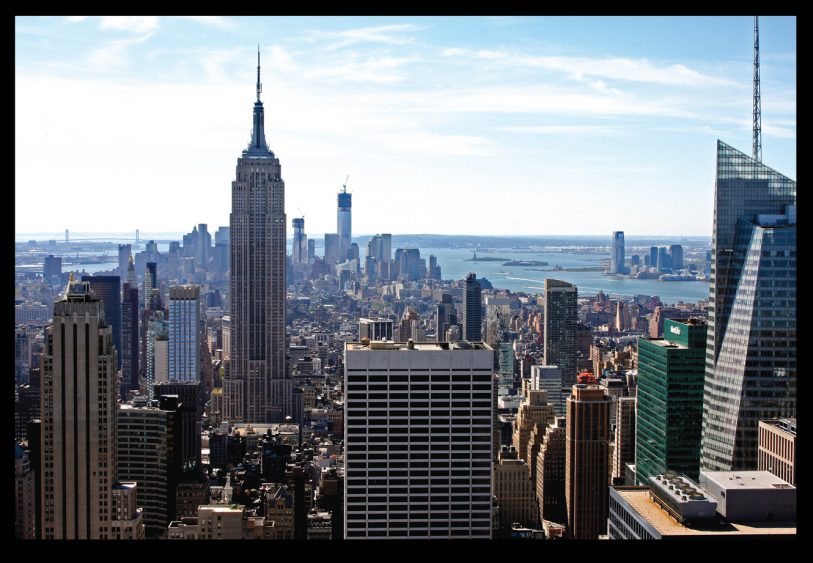 Liz Barry paid a return visit to the Big Apple in October and discovered some of the new visitor attractions and memorials that have been created since the atrocities of 9/11.

New York is a great city to visit at any time of the year; it is open all hours and transforms itself with each season. Staying in New York for a few days need not be too expensive. You can try looking for hostels which are relatively cheaper than other Hotels in New York.

I experienced autumn or fall as the Americans call it, just as the trees were starting to change colour and the farmers from upstate were bring their wares into the harvest market at Union Square Park.  The park is home to New York City’s oldest and largest Greenmarket.  It began in 1976 with just a few producers and has now grown to include well over a 100 regional farmers, fishermen, florists and bakers.

I went along on a Saturday morning which is a great day to be there as visitors mingle with native New Yorkers, whose baskets and shopping bags are laden with fresh vegetables, breads and cheeses amongst other delicacies. There is plenty to sample from sweet concord grapes, jams and chutneys to apple cider and local wine. My advice is to head there for breakfast and you will be spoilt for choice. You can also sample great dishes from the colourful painted food wagons that line the surrounding streets. 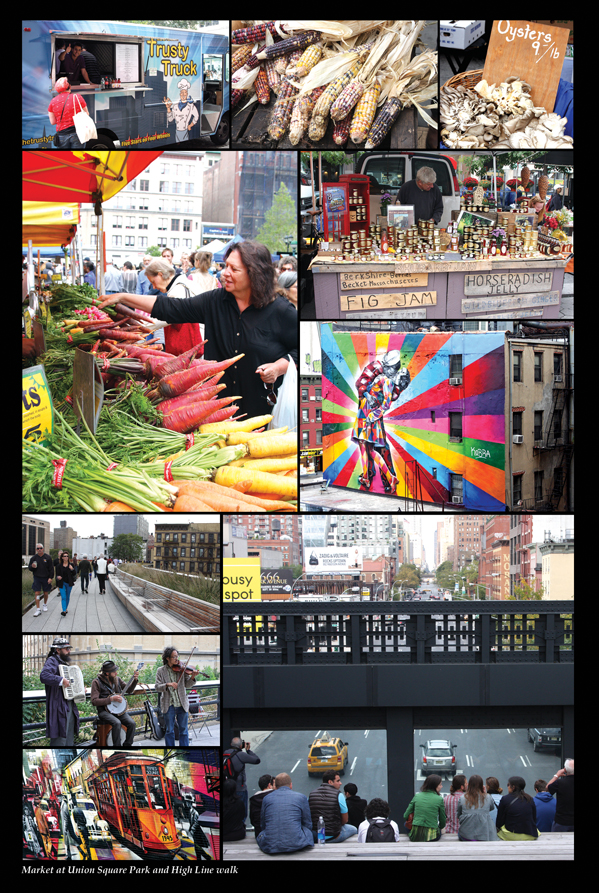 Feeling the need to justify all those calories I had consumed, I went for a walk along the High Line which is a public park built on an historic freight rail line high above the streets on Manhattan’s west side. It runs from Gansevoort Street in the Meatpacking District to West 30th Street, between 10th & 11th Avenues. At 30 feet above New York’s streets it certainly offers a different perspective of the city.

Raised seating offers a terrific vantage point from which you can look down onto the streets below. The art work which has been incorporated into the project is impressive, there are sculptures, painted murals on the sides of apartment blocks, water features and on the day I visited there were musicians entertaining the people. There is such a friendly community atmosphere it is a great experience and one that doesn’t cost a cent.

Another of New York’s free experiences is a trip on the Staten Island Ferry. Run by the city of New York to transport Staten Islanders to and from Manhattan.  Every day 60,000 people use the service between St. George on Staten Island and Whitehall Street in lower Manhattan. The crossing takes 25minutes to cover the 5 miles and provides an imposing view of New York Harbour and the bridges of Lower Manhattan from its deck. It also offers a superb perspective of The Statue of Liberty and Ellis Island as you pass by. 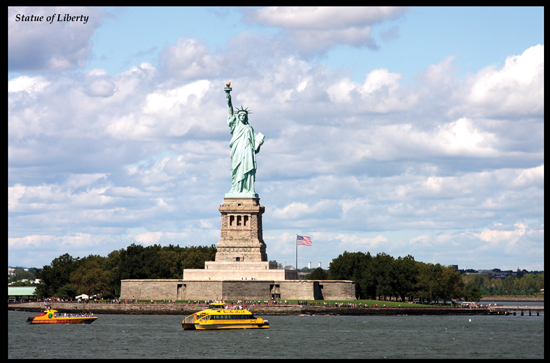 Also in Lower Manhattan are South Street Seaport and Pier 17 located where Fulton Street meets the East River, adjacent to the Financial District. There are countless restaurants, quirky shops and superb views across the East River. The skyline is also dominated by the Brooklyn Bridge an imposing structure but one so familiar as it is seen as the backdrop to many American TV series and films.

The Bridge connects two great New York City boroughs, Manhattan and Brooklyn and is one of New York City’s most famous routes for both tourists and native New Yorkers. It offers a wonderful photo opportunity and is also worth a visit in the evening to see the city lit up and the lights of the bridge reflecting in the waters below.

On my list of places I had to visit on my return to the city was the 9/11 Memorial, (entry is free and timed tickets are available on line). At that time in 2001 I was living in New York and staying with friends in Philadelphia. We watched with horror as the events of that day unfolded before our eyes on the TV screen. I returned to Manhattan two days later to see the devastation first hand and remember the acrid smell in the air, the smoke of the fires still hanging above the city and the walls of photos that lined hospitals and other buildings as families searched for loved ones that were still unaccounted for.

Today the area is very different, the memorial park is lined with Swamp White Oak trees that bring shade in summer and colour in fall autumn. Additionally a green space in the grove known as the Memorial Glade is used for gatherings and special ceremonies.The 9/11 Memorial features two enormous waterfalls and reflecting pools, each about an acre in size, set within the footprints of the original Twin Towers. Cascading water repeatedly streams down and falls away into these deep dark pools.The names of every person who died in the terrorist attacks of February 26, 1993 and September 11, 2001 are inscribed in bronze around the twin memorial pools.

It is certainly a place for contemplation and offers respite from the hustle and bustle of the city. Another place that offers some peace in the busy city is Central Park, but if you don’t have time to explore the 843 acres take a elevator ride up to the the Top of the Rock observation deck at Rockefeller Center in Midtown. Standing 70 stories up you will have a bird’s eye view of Central Park and also a 360° panoramic viewof the city. It is breath taking and you will be able to pick out some of the city’s other famous land marks such as the Empire State and Chrysler Buildings. For a contrast you can purchase a sun and star ticket and visit twice in one day and watch as the sun sets and lights start to appear across the city and Manhattan changes it’s rhythm  from day to night. 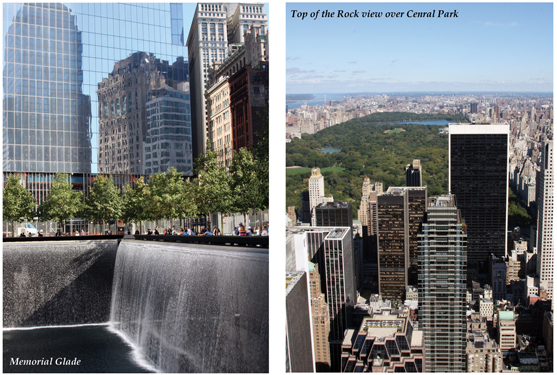 Night time is when you should also experience Times Square with its free, dazzling light extravaganza of constantly changing adverts on gigantic billboards. It buzzes with locals, tourists, spectators and performers. Mickey Mouse, Woody from Toy Story and a cast of other animated characters wander around eager to strike a photo pose. It is a thrilling place busy, noisy and energised.

There is so much to see and do in New York and so many neighborhoods to visit as the saying goes it is the City that never sleeps and neither will you.

Every season in New York has its own appeal, autumn for the colours and Macys Thanksgiving Parade, winter – Ice skating in Central Park and Christmas Lights. Spring – Cherry blossoms and the St Patrick’s Day Parade and Summer Street Fairs and the 4th July Celebrations. Of course all seasons are good for shopping along 5th Avenue. 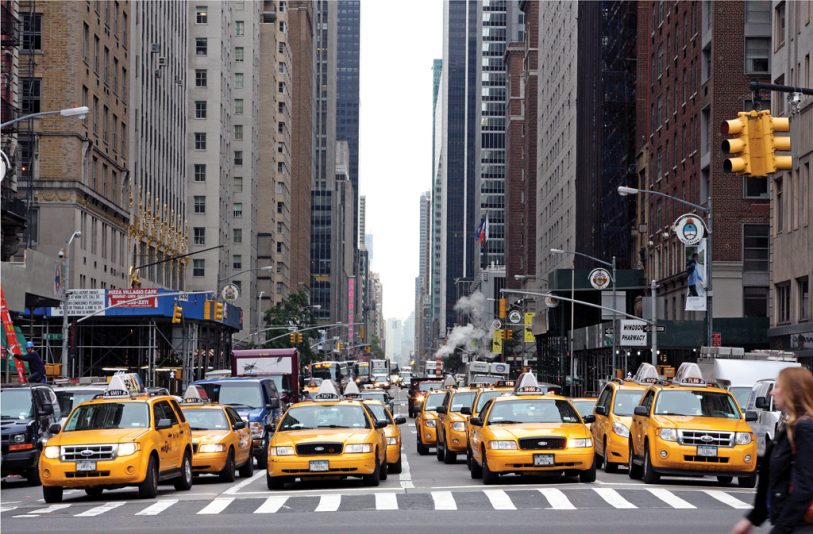 To and from the Manhattan:  Airtrain JFK wwwpanynj.info/airtrain

Accomodation the Roosevelt Hotel opened in 1924 it has been mutinously restored to its original grandeur, its interior is spectacular it has the wow factor and a great location in Midtown.

Top of the Rock topoftherocknyc.com