Burma or Myanmar as it is officially known has recently seen a rise in the number of visitors after years of isolation from the outside world. This has been greatly influenced by the release of pro-democracy leader Aung San Suu Kyi from house arrest in November 2010 and the end of a tourism boycott. 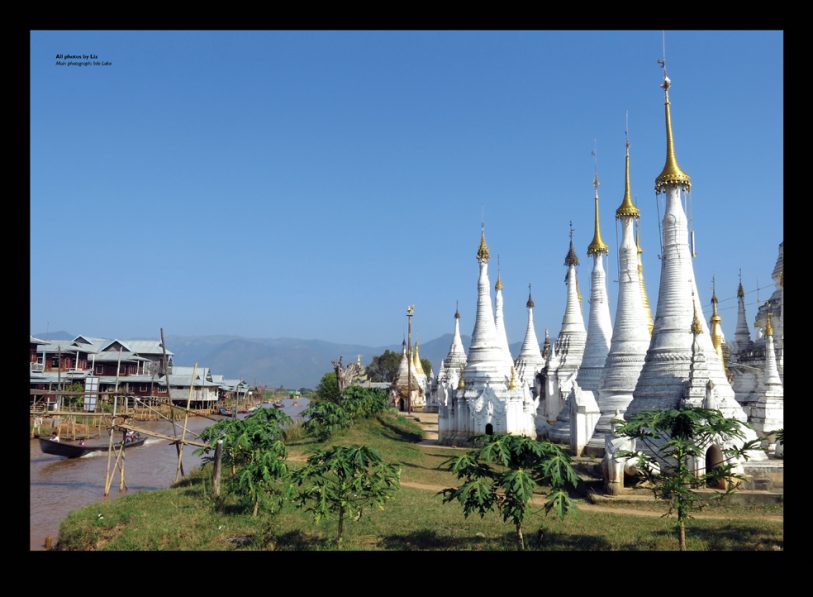 Once tourism was permitted in Burma it didn’t take Liz Barry long to book her ticket to visit this exotic and largely un-commercialised country. She brings back this unique report exclusively for Bay readers.

When the tourism boycott was lifted I started to plan my trip, and in December which is the dry season, I joined a tour with the adventure travel company Exodus to discover a country of great beauty and an interesting history. 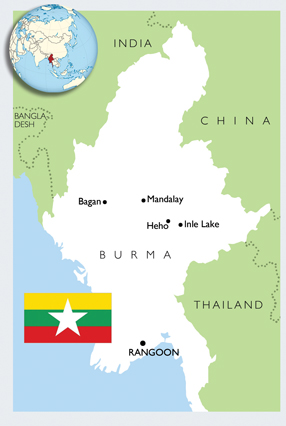 We arrived in Rangoon, the former British capital, for a two day stay. This gave us time to acclimatise to the warmth and sunshine, discover the city and admire the old colonial buildings whose colourful facades are sadly decaying.

We had time to observe the street life, as people ate their meals at pavement stalls. Locals could make a telephone call via a street vendor or have a letter typed. Stall holders cover wooden tables with calendars, books, postcards, clothes and fruit transforming the city streets into an energetic, enterprising thoroughfare.

Towering above the city streets is the Shwegagon Pagoda, one of the foremost religious sites in Burma, said to contain eight hairs of the Buddha. An amazing complex, there are numerous golden Buddha’s, prayer halls, sculptures and shrines where pilgrims come to pray and make offerings offlowers. The gold Stupa is studded with 5500 diamonds and other precious stones which glitter in the sunlight. As dusk approaches tiny lights outline the buildings; candles flicker along the covered walkways and the smell of incense hangs heavy in the air.

Leaving the city behind we flew onto Bagan, the land of a thousand temples –literally — as in the Archaeological Zone there are over 4000 temples, pagodas, stupas and ruins that date back to the 11th and 12th centuries. Some are easily accessible by road; to visit the  others you have to travel along sandy tracks, best undertaken by horse and cart, which was my preferred mode of transport, though there are bikes for hire if you are more adventurous. 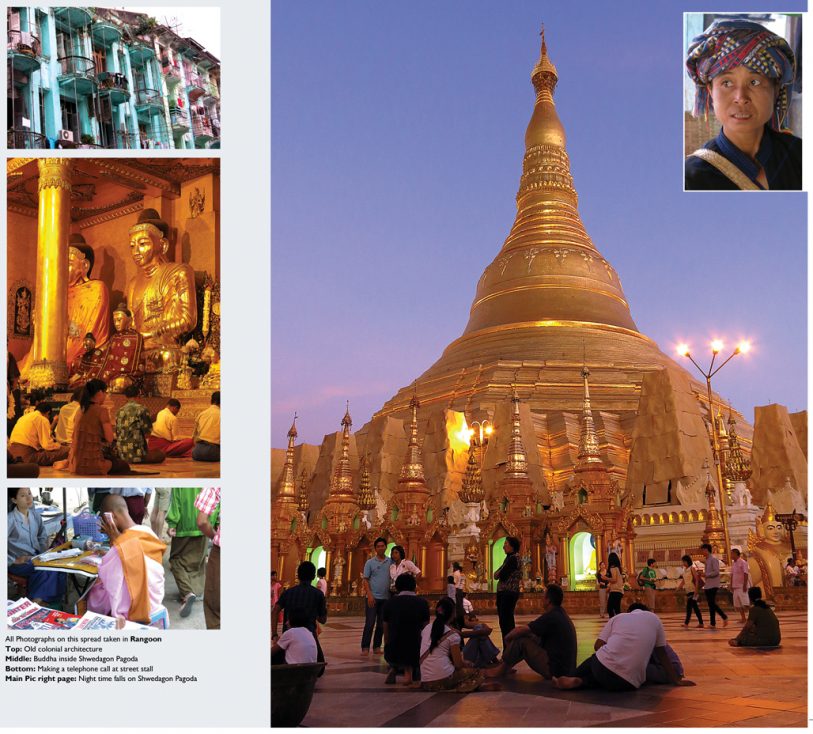 The area is breath-taking, gold leafed temples and red brick pagodas rise above green forest canopy. The interiors are decorated with murals, paintings, frescoes and stone inscriptions. At sunset we climbed the steps of Shwe Sandaw Temple where we had a stunning 360 degree view of the setting sun.

The whole atmosphere of the area feels as if you are stepping back in time. The dwellings were made from bamboo and thatch; in pens alongside were tethered white cows and goats. Each encounter with a villager was greeted by a smile and shout of ‘Mingalabar’, Burmese for hello.

We watched as a lady who was surrounded by baskets of goods, and balancing a set of scales in her outstretched arms, bartered vegetables and eggs for herbs and dried food. It was late afternoon and barefoot women briskly passed by, poles balanced across their shoulders hung with yellow plastic containers en-route to the village well.

After several days exploring Bagan it was time for another short flight across the plains to Mandalay. Our journey from the airport through the countryside took us past fields of sunflowers, rice paddies and duck farms. The city is laid out in a grid system and the streets are busy as people go about their daily lives. At Mahamuni Pagoda, we watched as gold leaves were applied to the face of the Buddha, a task that could only be undertaken by male devotees.

Later sitting in the back of a truck (known locally as a bus) we held on tightly as we climbed the winding road up to the top of Mandalay Hill with its glittering Stupas, to make a wish at Sutaungpyei Pagoda (literally meaning wish filling) and watch the sunset across the moat and the old city walls. As we waited several monks joined us, eager to tell us about their lives – welcoming the chance to practise their English. 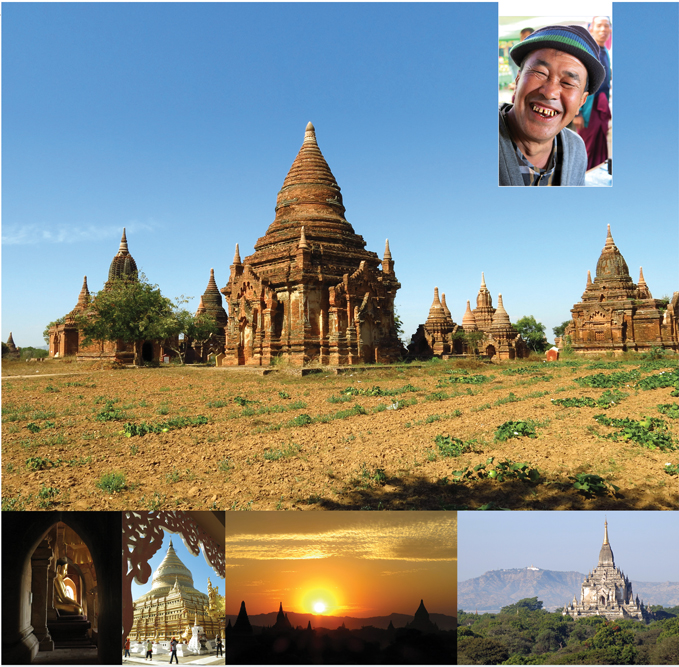 Next day it was a five thirty start to see the sun rise at U Bein Bridge, the world’s longest teak bridge, that stretches 1.2Km across Taungthaman Lake. Villagers crossed from shore to shore, some on foot others by bike on their way to work. Monks swathed in red robes to keep out the chill morning air, streamed across the wooden planks while below, fishermen launched their boats into the still water. It was a hive of activity, well worth getting out of bed for. As the darkness ebbed away the sky was infused with subtle shades of pinks and oranges with the rising of the sun.

After breakfast we began a leisurely day travelling along the Irrawaddy River by boat visiting the township of Sagaing. Observing life along the water way we were lucky enough to catch sight of the river dolphins – friends of the local fishermen as they responded to the human calls and pushed shoals of fish towards their nets.

Another short flight carried us from Mandalay to Heho, the gateway to Inle Lake. A scenic bus journey took us to the pine clad hill station of Kalaw situated in Shan State. As we had risen to an altitude of 1320m, the temperature was cooler and the early morning and night saw us wearing hats and gloves. In town there was a large market where I watched as balls of gooey dough were dropped into a wok of sizzling oil, feeling brave and hoping the cooking would kill any germs, I tried one. It was a banana fritter – crisp on the outside and soft and sweet inside – quite delicious.

The following day we trekked through bamboo groves, alongside tea plantations and orange orchards to visit the colourfully clad hill tribes. At Pane Ne Bin Village (translated means Jack fruit tree) home to the Pa Laung tribe we were welcomed into a longhouse where many family members lived , and looked on as one of the ladies wove a cloth of vibrant pink by hand that would be made into a longhi – a traditional long skirt worn by both men and women.

Children were running around holding ice lollies; with no shop in sight we wondered where they could have got them from. To our astonishment we came across an ice cream man – who had a metal box lined with cardboard strapped on the back of his bike. In it were layers of white and green lollies. Where he came from and how they stayed frozen in the heat of the afternoon remained a mystery. 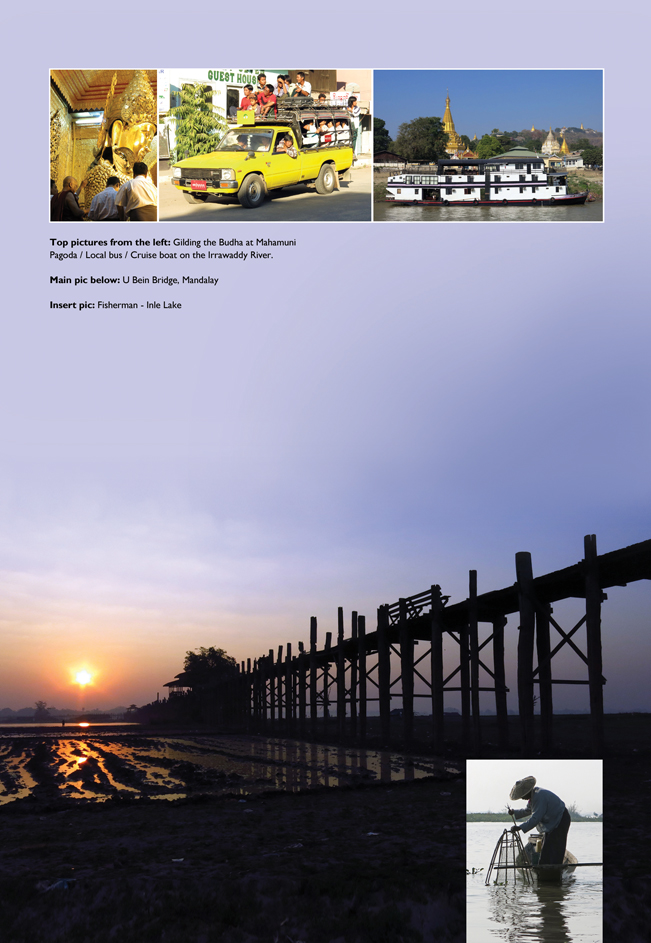 Leaving behind the cool pine scented hills we began a bus journey to Inle Lake. En-route we stopped at the Pindaya Caves which house over 8000 Buddha images-most of them gold.Pilgrims visit daily to bring new Buddhas – these vary in size from a couple of inches to life-size.

The journey was a bit of a bone shaker and in places the road was literally being made before our eyes, or should I say the wheels of the bus. Teams of ladies in wellington boots and straw hats carried baskets of stone; beside the road men stoked fires beneath barrels of tar. At one point there was just a big hole where the road should have been. With no alternative our driver made a detour by skirting the edge of a farmer’s field. I have done a lot of off roading but it was certainly a first by bus.

We explored the small villages on the shores of Inle Lake – the second largest lake in Burma. The people of the Lake are called Intha; they live in stilt villages on the lake and have established amazing floating gardens to grow their crops.

The Intha also fish the lake in their unique way: they row with one leg leaving their arms free to man-handle the conical fish baskets used to trap the fish.

The waterside was a hub of activity as groups of ladies congregated on top of a wooden jetty, bars of soap in hand to tackle their dirty clothes, whilst young men stood knee deep in the water rinsing dirt off their motorbikes. It provided a captivating glimpse into everyday life as the tribal people from the lake side villages gathered together.

The following morning I was up early to witness an important daily ritual – the morning alms collection. Outside the hotel at 6.45 a procession of saffron robed monks appeared through the morning mist. Each monk waited with his hands wrapped tightly around his alms bowl – steam rose from the scoop of rice given by a villager. Bare footed they passed by in silence, walking single file across an old wooden bridge over a canal as they carried on their journey through the town. I kept watching as the figures faded into the distance. Then one of the younger monks couldn’t quite resist the temptation to turn and look back and much to my surprise I was rewarded with a cheeky smile.

It provided me with a lasting memory of my time in Burma – a fascinating country whose people are gentle, friendly and gracious. They are very proud of their culture which they want to share. As interest grows and tourist numbers increase it will put great demands on the country’s infrastructure. A lot of development has taken place in a short period of time, but I am optimistic Myanmar will retain its charm and beauty and be able to share its history with many more visitors.

The Lady and the Peacock, The Life of Aung San Suu Kyi of Burma by Peter Popham

From the Land of Green Ghosts by Pascal Khoo Thw