Ever since a late Friday afternoon dash to the coast approximately three years ago I’ve had a bit of a soft-spot for Jaguar’s XF. The purpose of that particular journey was to meet up with the Welsh Group of Motoring Writers. Back then I was their newest, some might say greenest member, and that evening’s gathering was to be my first opportunity to introduce myself. Eager to make an impression I took along an XF. 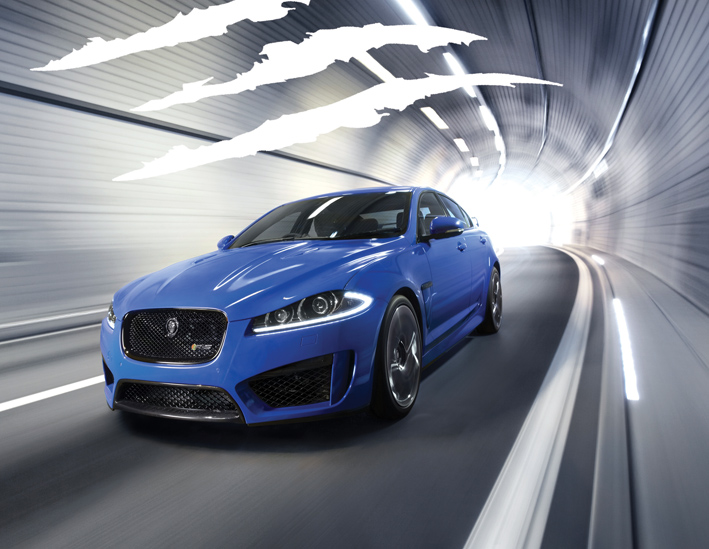 I’d requested the delivery of the Jaguar that morning so that it coincided with my appointment. As I made my way northwards its combination of refinement, style, and surprising performance helped calm my last minute nerves. If ever there was a car that had the ability to make its occupants relax and yet at the same time allow them to make brisk progress and possibly claw back little time too, surely the XF was it.

Since I last drove Jaguar’s contender to BMW’s 5 series and Audi A6 it’s been subjected to a subtle cosmetic re-working. The most obvious changes are the new rear lamps and some more angular, less rounded, headlamps which add a more menacing look when viewed head-on. But, in the case of the XF-R it’s not just headlamps that add more than a subtle hint of what’s in store.

By resisting the urge to fit the usual “fast flagship” wings and spoilers and sticking to an altogether less-is-more philosophy Jaguar’s designers have managed to add muscle to XF’s already well tailored lines with out going over the top. 20 inch rims wearing not only 285/35 ZR rubber but also a Jaguar Supercharged script fills the arches, a rear diffuser separates 4 exhausts, and a more heavily vented bonnet and wings make hints towards the XF-R’s performance potential.

It’s the same subtle story inside. Opening the door reveals an interior that could easily double as the ultimate bachelor pad. Soft black leather on the dashboard, steering wheel and door tops. Suede covers the roof and extends down the pillars, whilst touch sensitive map lights and a piano black centre console complete the look. Indigo blue lighting illuminates the instruments and switches come nightfall. Only the deeper more sculpted sports seats complete with embossed R logos separate this interior from that of a regular XF. Despite what these days are some slightly dated looking dials, this Jaguar’s cabin remains the epitome of minimalist chic.

There’s no key to deal with, the 5 litre supercharged V8 bursts into life with the push of a pulsating button. Let the engine settle and watch the XF perform its party trick; the steering column moves back to where you left it last – it rises when you open the door allowing you a more dignified exit – the facia vents revolve in the dash, and the gear selector rises to meet your hand. It’s only when you select Drive that you realise just how familiar, and yet strikingly different, this car really is.

The XF-R rides with a composure that belies its size, there’s little in the way of body roll and road noise is kept to a minimum. The steering is light at parking speeds but weights up nicely as progress quickens. And quicken it will.

If you choose to, the XF-R will cruise around all day gladly playing the executive saloon roll. The 8 speed auto box’s imperceptible changes will happily make sure the engine barely breaks a sweat: 70mph equates to little more than 1,400rpm.

However should you wish your travel to be swifter the XF-R will also happily oblige. 503bhp and 461lbft of torque mean the 0-62mph benchmark is covered in just 4.7seconds: 50-70 takes just 1.9 seconds. Terminal velocity is in the region of 155mph -174 if you add the speed-pack – this is a five-seater saloon remember. The fact that such devastating acceleration is dealt with so effectively and is accompanied by the most magnificent of exhaust notes, and, that the XF-R is prettier and cheaper than its German competition just adds to its appeal.

There’s a downside though, fuel consumption is in the region of 22mpg, those tyres won’t come cheap, and for its first year the tax disc sports a four-figure fee. But as Jaguar legend Norman Dewis once told me “you’ve got to pay for performance”.

Whether you can afford it or not, the XF, especially the R, leaves a lasting impression.