A visit to Marrakech in early spring avoids the heat and humidity usually associated with this jewel in Morocco’s crown. What I hadn’t bargained for was rain and unseasonably chilly weather, but it didn’t dampen our spirits in the least. TheBAY editor LESLEY WILLIAMS and her sister visit Marrakech.

When searching on-line for a suitable place to stay, I discovered Riad Maizie in the Judge’s Quarter of the Medina which sounded like the perfect place for a short break. A Riad is a traditional Moroccan house or palace with an interior garden or courtyard. The word riad comes from the Arabian term for garden, “ryad”. The ancient Roman city of Volubilis provides a reference for the beginnings of riad architecture during the rule of the Isridic Dynasty.

We were met at the airport and driven by taxi to Djemaa el Fna. This is the main square of Marrakesh, used by locals and tourists. During the day it is alive with stalls selling orange juice, dried dates and figs, water sellers dressed in colourful traditional costumes with leather water bags and brass cups, snake charmers and djellaba robed men ready for a photo opportunity with their Barbary apes.

As night falls the snake charmers depart, the square becomes more crowded. Chleuh dancing-boys – it would be against custom for girls to provide such entertainment, perform their acrobatics, story-tellers telling their tales in Berber or Arabic to an audience of appreciative locals, magicians, and peddlers sell their wares of  traditional medicines and as unlikely as it seems, dentures. The square fills with dozens of food-stalls and trestle tables where people sit to enjoy dishes of lamb, chicken and vegetables. 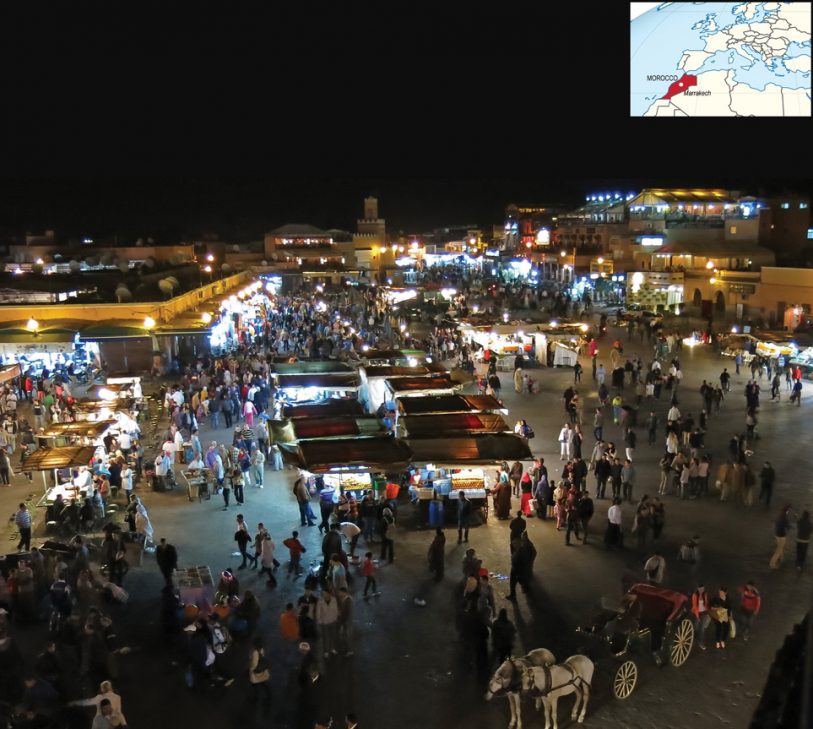 From the square we had to continue our journey on foot through the souk – our luggage transported on a carrossa – a two wheeled metal cart pulled by an elderly man. The alleyways in the Medina form a labyrinth of windowless passageways. Only the occasional open doorway gives a hint of what lies behind.

We eventually reach our destination at the end of a blind alleyway. Entering through a small door within a door we found ourselves in a hallway which in turn led to a beautiful courtyard complete with a central fountain and banana trees. This is exactly the Marrakech we had been looking for.

Both the interior and exterior of the riad were highly decorated with mosaics, hand carved wooden doors and painted furniture. All three floors opened onto the central courtyard which would normally provide a cool place to sit, but on this occasion I was glad I had packed a jacket. The roof top terrace with its views to the Atlas mountains would later in the year be a wonderful setting for an al fresco breakfast or sundown supper. 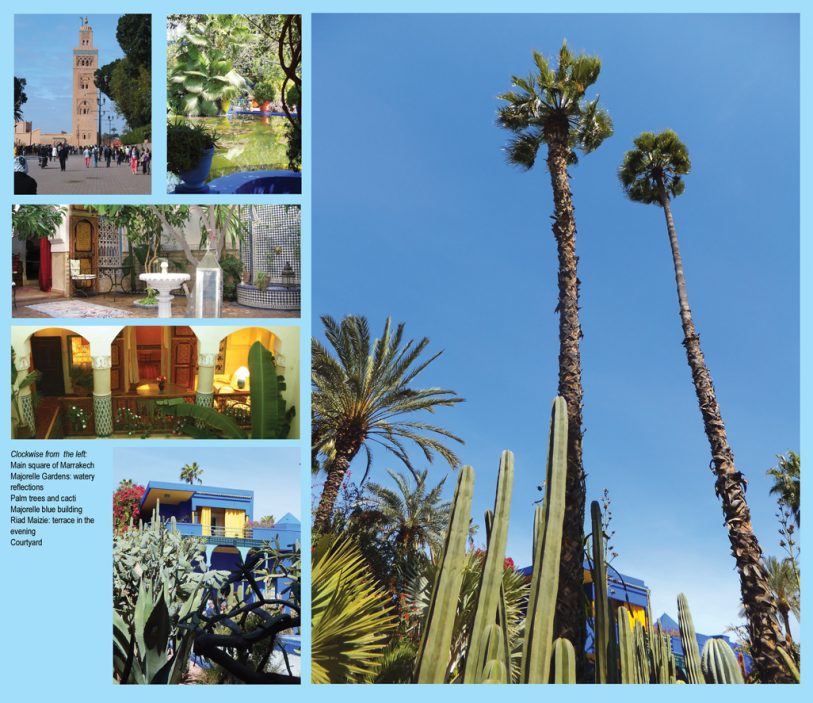 Apart from the obligatory shopping and haggling in the souk, a visit to the Majorelle Garden was on my wish list. It was designed by the expatriate French artist Jacques Majorelle in the 1920s and 1930s, and bought by the French designer Yves St Laurent and his partner Pierre Berge in 1980.

The garden is home to cacti, palms and bamboos from around the world, their architectural shapes contrasting with the buildings and urns painted the special shade of cobalt blue that Majorelle used extensively – a colour that is named after him – Majorelle blue.

Our host at Riad Maizie offered to cook for us on our last evening in Marrakech. But first we had to accompany him to the souk to buy the ingredients for our chicken, preserved lemon and olive tagine. Fortunately he had already purchased the chicken earlier in the day, as I don’t think I would have been happy to select my chook from a cage and wait while it was dispatched.

The meal was delicious – all the more so for being served with a fruity Moroccan red wine. The Medina is on the whole completely alcohol free. 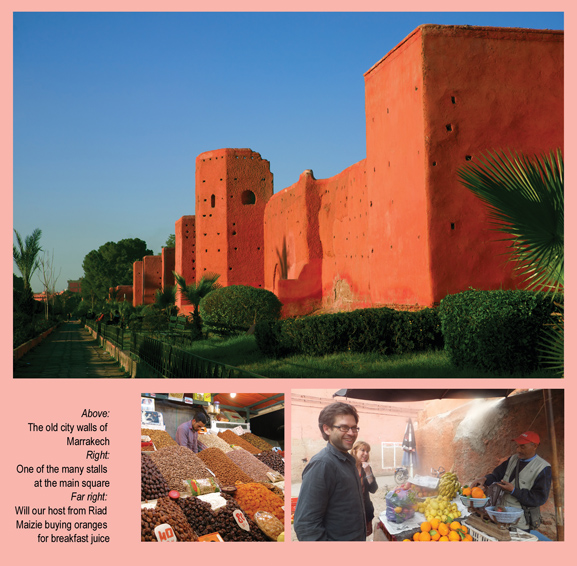 Marrakech makes an excellent short break destination that doesn’t break the bank. I visited with my sister and at no time felt uncomfortable at being two lone women in a foreign country. Low cost flights are available and hotels or riads can be booked on-line.