They say if you can remember the 1960’s you weren’t there. So, if things for some of you are a little hazy, allow me to fill in a few of the gaps. I’ve concentrated mainly on 1963 for reasons which will soon become apparent

Neil Armstrong is still a test pilot. Ferrari are still putting the engines in the front of their cars. John F Kennedy is the President of the USA. A little known Liverpudlian band called The Beatles are recording their first album at Abbey road. Dr Beeching is busy shutting nearly 2000 railways stations. James Bond is still waiting for the keys to his Aston Martin and The Duke of Edinburgh has just opened Rootes Group’s new car plant for the production of its new rear-engined mini-car – the Hillman Imp.

Meanwhile at the Frankfurt Motorshow, a small family owned car-maker named Porsche, are just about to unveil their new rear engined sports-coupe: The 901. No that’s not a misprint, or a hazy 1960’s memory (at the risk of rubbing things in, I didn’t appear until 1973). Porsche really did call the successor to 356 the 901. Were it not for Peugeot’s protest – the French claimed they owned the rights to all centrally zeroed vehicle nomenclature – one of the most famous cars of all time would have been know by another number. Porsche, then the much smaller company, duly relented renaming their car Neunelfer: The Porsche 911 was born. 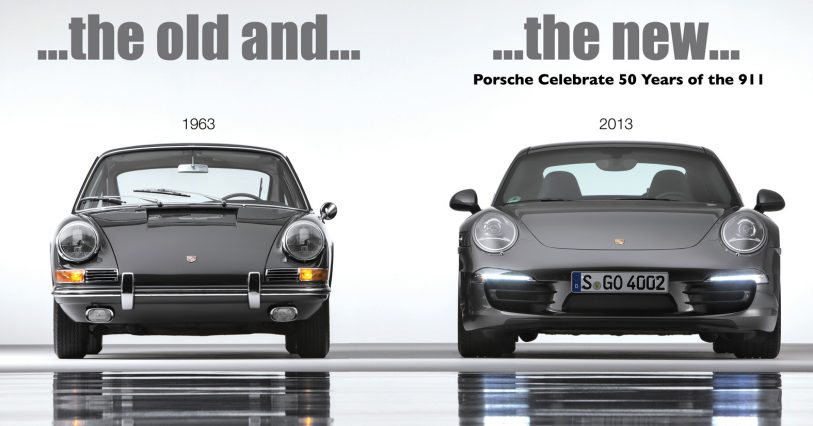 This year marks the fiftieth anniversary of that unveiling so what better excuse is there for getting acquainted with the latest version of Stuttgart’s perennial 2+2?

Longer, wider and lower even, more so too in cabrio form, than the 2 litre 130bhp original, today’s 911, or to give it its actual title 991 – all 911’s except the original have their own number – is powered by a flat six boxer engine (what else?) packing 350bhp and 288lbft of torque. These days it’s cooled by water rather than air, and, if you choose not to go down the automatic Porsche PDK route you’ll find that it’s mated the world’s first production-car seven-speed manual gearbox. That extra cog, plus the new 911’s lower kerb-weight, thanks in part to the extensive use of aluminium in its construction, mean that Porsche’s claim of 30mpg is now a definite possibility rather than just sales patter.

Cosmetically different it may be and yet instantly recognizable the new 911 remains; same bug-like

headlamps, same roof line and same vented, bulbous rump. From inside too it’s just the same. The new 911 gains the multi-buttoned centre console, and regretfully the electronic handbrake, from its big brother the Panamera and interior wise it’s more spacious than it’s ever been. But don’t go thinking that it’s any less driver focused.

As always there’s nothing inside the 911 that doesn’t need to be there. The steering wheel is devoid of any extra buttons; there’s no cruise control (I seldom use it anyway), Bluetooth remains optional, and as ever the trademark five-dial dash lets the rev-counter take centre stage.  You sit low, your view ahead framed by the thin A pillars, looking out over the 911’s wing tips. Visibility is all round surprisingly good, all of the controls are nigh-on perfectly weighted and nothing important seems more than a hand span away.

It’s the engine that dominates the driving experience, at low revs it’s as docile as the family runabout allowing the 911 to retain its reputation as the everyday super-car, but like all Porsche flat sixes it loves to be revved. Allow it to spin, and not only does its metallic timbre sound like a sports-bike, it delivers similar performance. The 911 is maybe approaching middle age but it’s still capable of showing up the youngsters; 0-60 takes a whisker under 5.0seconds and where allowed it’ll do 178!

And yet these days the 911 doesn’t intimidate. The new electronically powered steering (it reduces emissions) tells you everything you need know, Porsche’s boffins sorted out the early car’s tricky handling reputation long ago, and even in the cabrio wind and noise levels are as hushed as you’d expect from a 80-grand German aristocrat. So good in fact is the 911’s new near-rigid “panel-bow” hood that I had to remind myself that I was driving the drop-top.

After half a century the 911 remains the definitive sports-coupe, it’s outlived much of its competition yet it remains the benchmark by which others are judged. It’s the legend, the icon and long may it continue.