It’s taken me a little while, but now I think, I’ve finally made myself comfortable in Audi’s all new A3. It arrived on Monday and a busy schedule meant I only really had time to let the delivery driver explain that I could change the way the A3 drove via its Drive Select switch before getting back to more pressing matters. The rest he said was “all just standard Audi – you’ll figure it out”. So I did.

Even in S-line trim the A3 comes with a fairly standard looking key. There’s no keyless entry nonsense and, after having pressed the blipper to open the door, to start the engine you simply place said key in the ignition and turn it. Simple, easy and traditional: Perfect.

Next the seat: There are no electrics. Reach down; lift the leaver; slide forward (I’m not very tall) and release. To recline, simply turn a knob. What could be easier?  The mirrors too are idiot proof. Rotate the little knurled button on the door to the left, wiggle it like a joystick, and the passenger door mirror follows suit; move the button to the right and… well… you’ve guessed it.

A little lever beneath the steering column, when released, allows full fore, aft and vertical movement of the (optional) multi-buttoned and flat bottomed wheel. It also means you can see the beautifully legible dials more clearly.

All of this took probably less time that it has just taken you to read all about it. Yet the heavily sculpted, and S-line embossed, seat still felt flat. The truth is it took me another two days to find the all-but-hidden lever that lifts the front of the seat cushion; it lends some much needed under-thigh support. 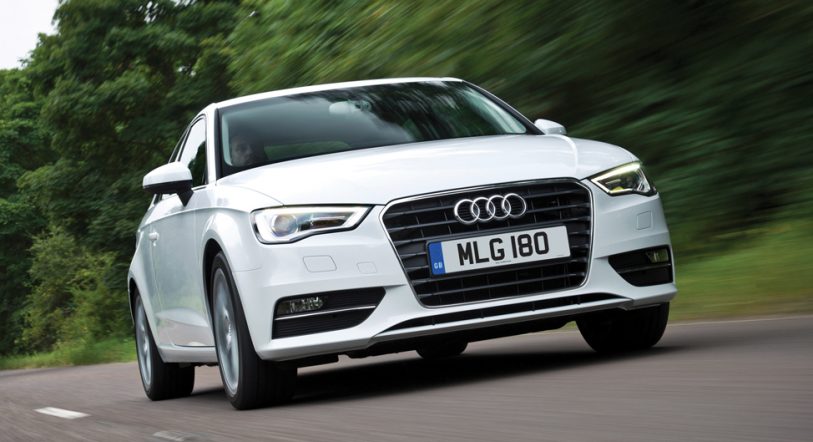 If all that makes it sound as though I’m criticizing the new A3’s interior, I’m not. Like all modern Audis, the use of high quality materials and the minimalist styling – hence that elusive lever – mean it’s actually one of the best fitted of any of the so-called premium hatches. A little sombre in near all-black it might be, but it’s reminiscent of Audi’s TT and the way the MMi screen glides back in to the dashboard when not in use is exquisite. Plus everything feels like it’s going to last forever – a feeling that’s amplified by the bank-vault like way the door shuts behind you with a reassuring sounding thunk.

Inside it’s all new, but from the outside you could be forgiven for thinking that the latest generation of A3 hasn’t changed at all. In time honoured Audi tradition, the changes that have taken place are far more evolutionary than revolutionary. The newer car’s a little wider, longer, and ever so slightly taller; daytime running lights are now standard and the bonnet and the front wings are more expressive, the bumpers and the single-frame radiator grille have also been finely upgraded, but it’s only when you park the outgoing model next to the incoming one that you really notice the differences.

However, drive the new A3, and it’s the differences you can’t see that soon become apparent. The new A3, like the new VW Golf, SEAT Leon, Skoda Octavia, and a whole host of yet to be launched VAG Group vehicles, sits on the very clever MQB platform. Not only does it mean the new A3 is lighter (up to 80kg) and more economical than it used to be, it also rides a lot better too. Even on the 18 inch alloys fitted to S-line trimmed examples, although still a little firm, the A3 now smoothes out the bumps far better than it ever did. It is worth pointing out though that the sports suspension option had been de-selected, on the test car, a choice Audi now offers for free.

Handling wise the A3 may have swapped a few of its sporty genes for some more comfort orientated ones but it still feels very sure footed, – safe even – and surprisingly, on the right road, fun, as there’s little, if not no, body roll. More “enthusiast” driving reveals the A3 eventually gives in to Audi’s trademark understeer, and the steering could be accused of feeling a little numb. The upsides however are (in the 1.6 TDi guise as tested) a very smooth shifting six speed gearbox, over 70mpg, zero congestion charges and a free tax disc too.

When you factor in the prestigious badge, Audi’s rock-solid residuals, and that via the Drive Select switch (which I’d almost forgotten to tell you about) you can chose to drive the new A3 in either Eco, Comfort or Dynamic modes, or pick the steering settings of one mode, the engine mapping of another and the suspension settings of the third to tailor the A3’s character to exactly the way you like it and you have the makings of a car that you could get very comfortable with indeed.