Early in 2013 TheBAY received an email from the marketing manager at Kaunas Airport in Lithuania, inviting us to join a party of travel writers on a weekend break, to discover what this part of the country has to offer tourists. My first action was to put Lithuania into my internet search engine, to find out where in the world we were being invited to visit. 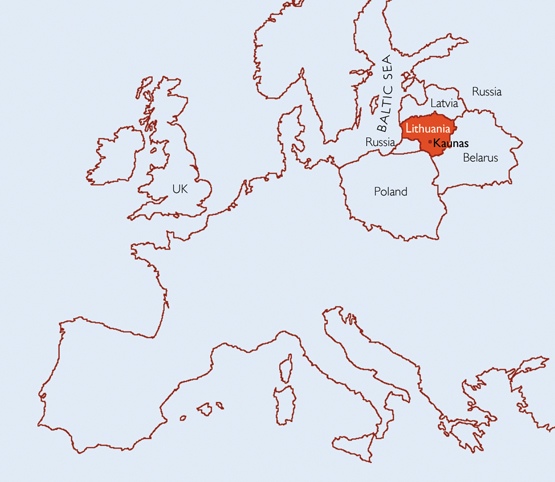 Lithuania is situated on the Baltic Sea between Poland and Russia, Latvia and Belarus. Having been occupied by Germany during WW1the following twenty years saw an independent Lithuania until the Soviet troops arrived in 1940. In 1941 Lithuania was invaded by the Nazis until the Red Army returned in 1944. Lithuania was, in 1990, the first Soviet republic to declare independence.

Loreta, our guide for the weekend started our sightseeing at Kaunas’ Aleksotas district, accessible via its funicular railway, offering a view of the charming Old Town and the Nemunas and Neris rivers. Here we saw a wedding party toasting the happy couple with local sparkling wine although the groom seemed to be more interested in sharing a bottle of whisky with his friends.

Leaving the revellers we journeyed downhill to Kaunas Castle, which looks as though it has come straight out of a Lord of the Rings type film set. Built in the 14th century, this stone castle was built at the confluence of the Nemunas and Neris rivers to resist Crusaders’ attacks. It has undergone extensive renovation in the past year and now houses local art and stained glass exhibitions. 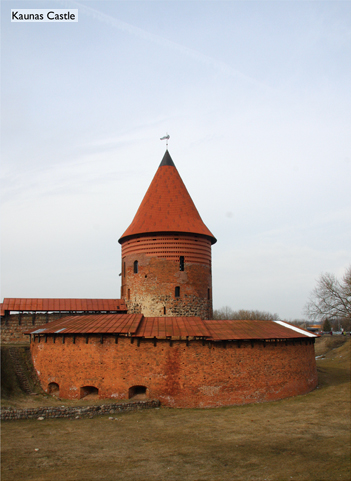 Our next port of call was the city’s Town Hall, a Gothic, Baroque and early classical building referred to as the White Swan. Here a guard dressed in nineteenth century soldier’s uniform, complete with rifle and bayonet told us, in slightly broken English, that he’s been awaiting our arrival so he can salute us. He took a toy cannon from the gift shop, primed it with gunpowder and lit the fuse. The explosion echoed around the square causing pigeons to take flight and old ladies to jump metaphorically out of their skins. It’s not something you’d ever see in health and safety obsessed Britain.

A short stroll away is the stylish Daugirdas Hotel. The owner proudly showed us around his restored 16th century merchant’s house which has an inside out feel about it. The lobby is designed to look like a street, with streetlights and a pavement café. Daniel Craig stayed here when he was filming Defiance in 2008 and Sir Richard Branson is due to stay on a visit to Kaunas this year. 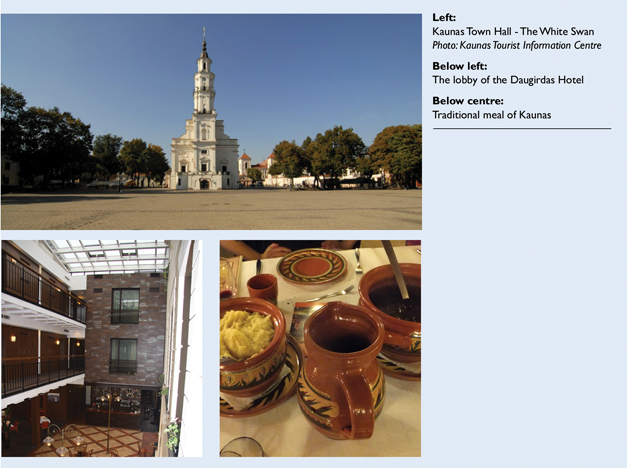 A traditional meal – nobleman’s feast was served in the cellar restaurant of Berneliųužeiga. Wild mushroom soup was served in a hollowed out loaf of dark rye bread followed by a hearty venison stew and mashed potato. We sampled the local red wine and also ‘gira’ which is made by soaking rye bread in water and allowing it to ferment. Loretta explained that most people would make this at home to their own family recipe but that it was also commercially produced. It was reminiscent of the ginger beer that families used to produce for general consumption, until it was discovered to be alcoholic.

The traditional fare in Lithuania is based on potatoes and bread – cheap to produce and excellent fuel against their extremely cold winters. There were still signs of heavy snowfall on our visit in April and the riverbanks held huge slabs of ice. But for all the calories that they consume there is a distinct lack of obesity – probably down to the Lithuanian love of sport and activity and the fact that fast food outlets are conspicuous by their absence.

Loreta was keen to show us the local night life and so we embarked on a pub crawl taking in some of the many pubs, clubs and restaurants in the city centre. Kaunas had plenty of entertainment on offer to suit all age groups, but as we had a busy day ahead of us we headed back to our hotel at midnight. 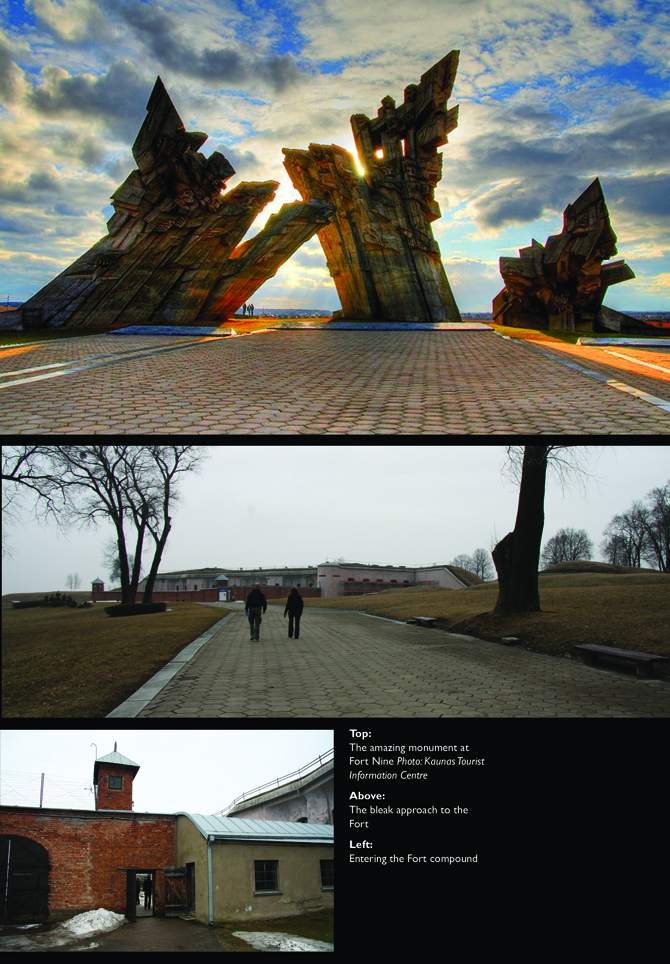 On day two of our tour we travelled to Kaunas’ 9th Fort where, during the years of Soviet occupation, political prisoners were housed on their way to the labour camps in Siberia. During WWII the fort was in Nazi occupation and was used as a place of mass murder. At least 50,000 people, 30,000 of them Jews, were killed at the fort in what became known as the Kaunas massacre. The Fort is now a museum to the atrocities that occurred there and we left in a sombre mood.

Kaunas is home to one of the most bizarre museums I have ever visited. The Devil Museum houses 2,000 devils in media such as pottery, painting and papier mache. Across the road is the museum to Čiurlionis, a Lithuanian who, in a career that spanned just ten years, produced approximately 400 musical compositions and the same number of paintings and etchings.

Vilnius Street in the Old Town is the place to go to people watch. It’s pedestrianized so it is easy to stroll from shop to bar without the need for jay walking. Bars serve locally brewed beer and we visited Avilys bar to sample their own brew along with ‘snacks’. Pork ears are a local delicacy which had to be sampled along with dry cured ostrich meat and a curd cheese. These were a far cry from the porkscratchingsand crisps that our pubs have on offer. 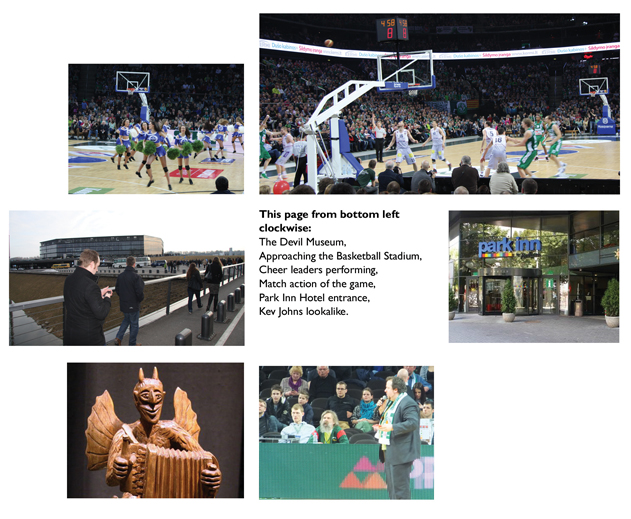 Basketball is not so much a sport in Lithuania as a religion. During our stay we learned that there was to be a match between the team from Vilnius, the capital of Lithuania and Kaunas. It was too good an opportunity to miss and with the ticket price being about £14 for front row seats we unanimously voted to forgo a trip to a spa in favour of an evening at the stadium. It was well worth the change of plan, as we got a better taste of the real Lithuania in rubbing shoulders with the locals. Kaunas’ answer to Kev Johns compered the evening, which also featured scantily clad cheer leaders to entertain us during the many breaks in the game. Vilnius was the victor on this occasion so the Kaunas crowd left the stadium in a subdued mood. We walked the short distance back to our hotel and repaired to the bar to drown our sorrows – we had felt very much like locals and had been rooting for Kaunas to win.

We stayed at the Park Inn which is located in easy walking distance of the Old Town and Vilnius Street with its many shops and bars. The hotel has an excellent restaurant serving traditional and European cuisine. The buffet style breakfast serves chicken sausages and eggs along with a good selection of cold meats, cheeses, fruit and cereal. 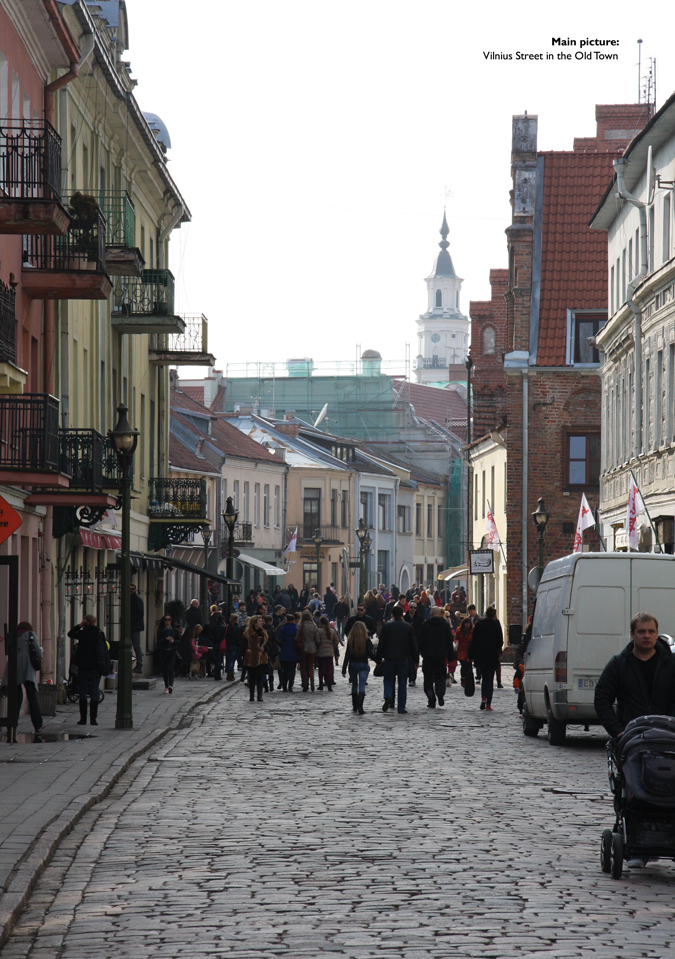 Our visit was made all the more enjoyable by the warmth and friendliness of the Lithuanian people and their hospitality. Every café, bar, restaurant and hotel was of an exceptionally high standard in every aspect.

At just under 3 hours from Bristol, Kaunas makes a great weekend city break. Alternatively Lithuanian Spa resorts are most luxurious and very reasonably priced. Next month I will give you details of those we visited.

Ryanair flights from Bristol to Kaunas start from £30. Website: www.ryanair.com