IN 2012 TheBAY INTERVIEWED SWANSEA BORN GREG HEALY AFTER HE HAD CONQUERED EVEREST.

SO IT CAME AS NO SURPRISE WHEN WE RECEIVED AN EMAIL FROM HIM IN EARLY MAY TO SAY THAT HE WAS IN CHILE ENDEAVOURING TO CYCLE AROUND THE WORLD. 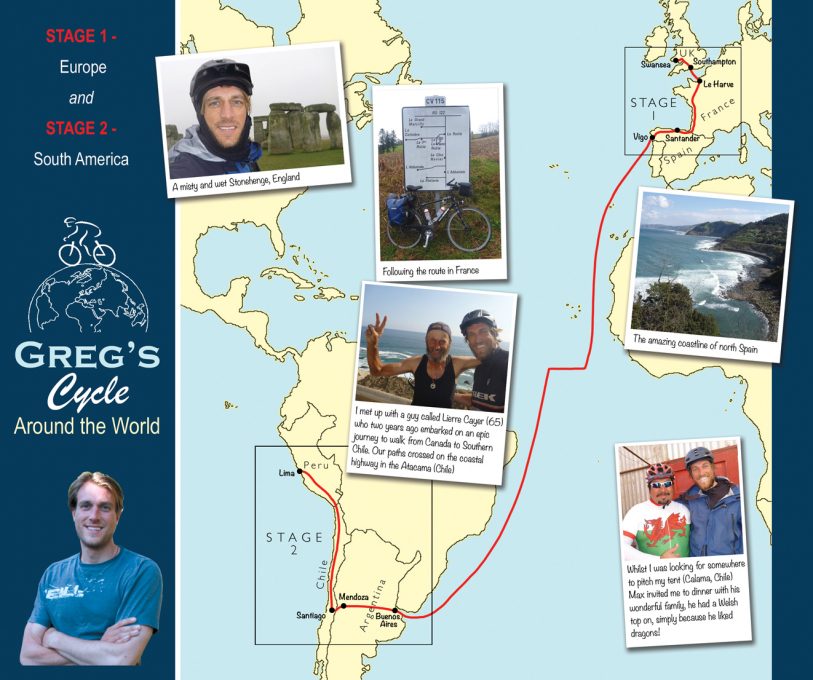 Greg left Swansea on 25 February 2013 and began his epic journey. Over the next few days he made his way to Southampton where he boarded a ferry to Le Havre and onwards down through France to Santander in Spain. His journey wasn’t straight forward and he had several setbacks with punctures and broken spokes but eventually he made it to Vigo (Spain) where he took a flight to Buenos Aires (Argentina) where the real adventures began.

Here Greg tells us the story of his journey … so far.

Initially, whilst starting to research the idea and feasibility of a circumnavigation of the world by bicycle I focused on the adventure aspect, since what I thrive on are the challenges in life that are difficult, in part because those are the activities that make me feel most alive. Now three months into my journey, a little under 8,000km in distance and the European and South American legs completed, I have come to appreciate that what has been most important and rewarding through my journey to date is not necessarily the mountains and oceans, the deserts and cities but the people I met along the way.

Cycling provides the opportunity to see and experience life in slow motion. It is not just about the A to B but about the communities and the hidden beauty that exists and thrives in the often overlooked, and perhaps most important, “to” part of the journey. 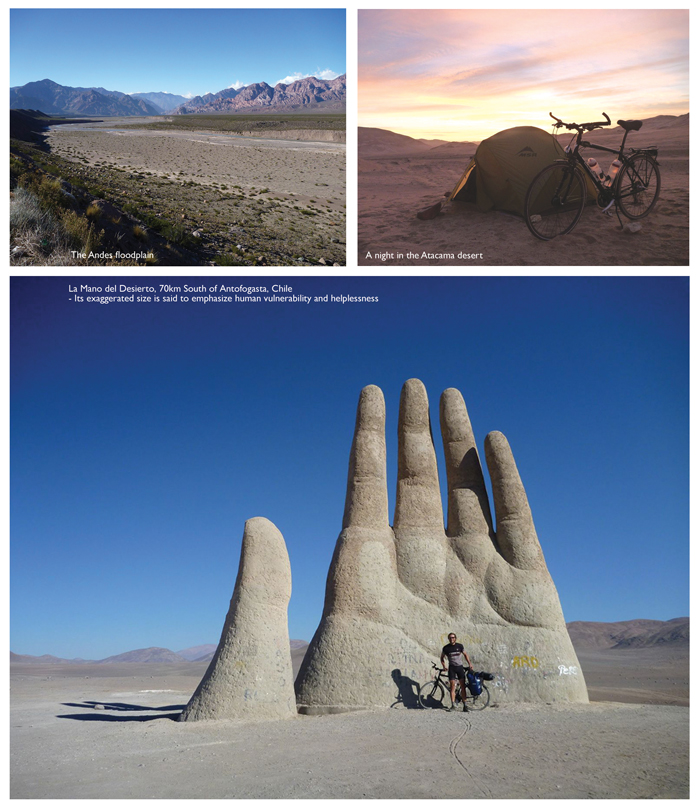 Arriving in Buenos Aires at the end of March with a badly damaged bike in the middle of Easter made for a very stressful commencement of my South America tour. Fortunately my two months in Colombia earlier in the year learning Spanish really saved me but also provided me the opportunity to experience life and culture at a local level. After a frustrating 3 hours trying to find a bike shop that was open on the Thursday before Good Friday a local cyclist came to my help and cycled with me through the back streets of the city directing me to what seemed the only bike shop in Buenos Aires that was open. Now late in the evening and after all emergency repair work completed it was too late for me to escape the city to set up my tent for the night, but the bike shop owner invited me to his house for the Easter festivities. The amazing generosity of the locals continues to inspire me.

My intended plan was to head on the most direct road which was Ruta 7 from Buenos Aires over the Andes to Santiago, then North on the Panamericana through Chile to Lima, Peru. The single laned highway of Ruta 7 which had no hard shoulder and was packed with impatient truck and bus drivers jostling and bullying their way past, was one of the most dangerous roads I have ever experienced. It was not a difficult decision 300km into the route to take the first turning off and instead take the longer side roads to Mendoza. Day temperatures reaching around 30 degrees and camping at night reasonably straightforward, often behind trees at the side of the road, led to a much more relaxing journey through Argentina before commencing my 4,000m climb to the Cristo Redentor pass through the Andes and past Aconcagua, towering over the other peaks at just under 7,000m. 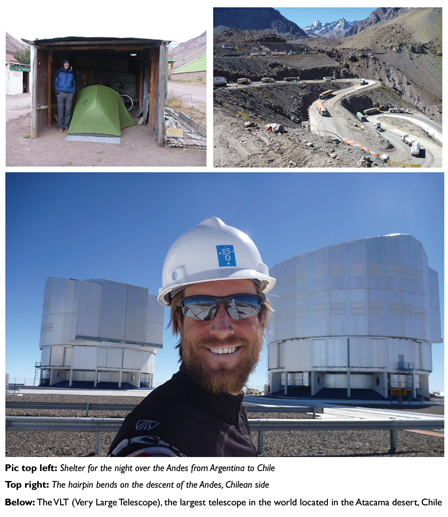 The route following Mendoza passes mile after mile of vineyards before heading into the foothills of the Andes. The initial gradual climb is surrounded by beautiful vistas of the rugged mountains with craggy peaks.

The foothills cleared to a dry, shrubby plateau that is fed by an imposing 300m wide floodplain scoring the landscape 100m deep as far as the eye can see. The Andes loomed large on both sides, with sleek waterfalls tumbling down its sides, but what started as a blue skied calm day with a turn of a corner changed to one of the most difficult days of my journey to date. The storm clouds now approached and a brutal headwind slowed progress up the steepening road to less that walking pace, and an additional 5 hours on, I realised that I was not going to get over the high point into Chile that night. Around 20km from the peak I found an old tin shed where I was able to set up camp for the night and shelter from the cold wind and snow that started to fall as the sun dipped below the surrounding 5,000m peaks.

Following an early rise the next day I made it through the border in good time. The Chilean side of the Andes was very different. There was a lot more snow and while the ascent on the Argentinian side was reasonably gradual, the descent on the Chilean side was very steep. The road curled its way precariously down the mountainside. With the long line of trucks and busses trying to negotiate the hairpin bends at a snail’s pace, the bicycle was definitely the transport option of choice. A further 100km of uncrowded mountain valley roads and I had reached the Pacific Ocean where I was treated to a night camping at the local fire station.

Next on the agenda was a ride through the driest place on earth, the Atacama desert which occupies 105,000 square kilometres and gets anaverage rainfall of 0.004 inches per year. With landscapes similar to those on Mars, many NASA missions come to the Atacama for instrument testing. For me I wanted to make the journey that little bit more difficult and cycle to the VLT telescope, the largest telescope in the world located mid-way through. 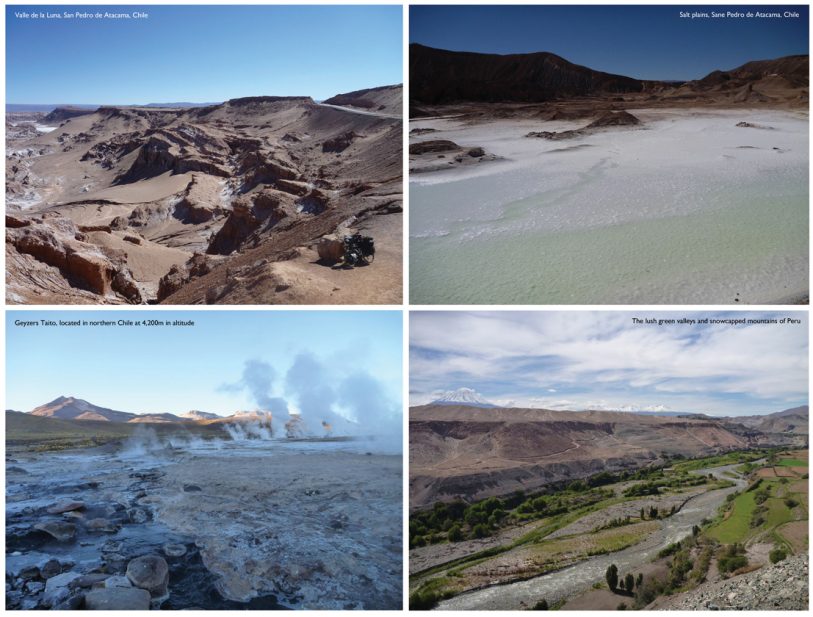 Typically day temperatures reached around 35 degrees and night temperatures well below zero, with water and food stops every 100 to 150km which led to the necessity to carefully plan supplies. I thrived on the sheer remoteness and the challenges that it brought. Nights all alone in the desert with no notable civilisation for hundreds of kilometres provided the most incredible light show on earth.

A truly breathtaking vision of what seemed to be every star in the universe, the crystal clear Milky Way burning its way through the centre, the depth of beauty unsurpassed.

A further 2,000km North and another route variation through the thermal town of San Pedro de Atacama, I had reached the Peruvian border where almost immediately my bike showed it was not quite so happy with the trip through the desert as I was. Bike supplies were incredibly difficult to source in Peru, not due to availability but due to quality. With three rear spokes breaking in a week followed by a complete wheel rebuild and a further two spokes breaking in two days, my bike was in desperate need of a little spa treatment.

The lush green valleys and snow-capped mountains of Peru bring a relaxing familiarity back to riding. With an incredible penultimate night at the navy station located in Paracas, a hidden gem located next to a beautiful national reserve and a true natural paradise, I finally limped into Lima, the last town on my amazing 6,500km trip through South America.

I now prepare for the next leg through North America from Miami to Los Angeles, with a mix of apprehension and excitement for the known and unknown challenges that lie ahead as the adventure continues.

See next month’s TheBAY where we’ll pick up with Greg’s next adventure, his arrival in Miami just as tropical storm Andrea is about to hit Florida!