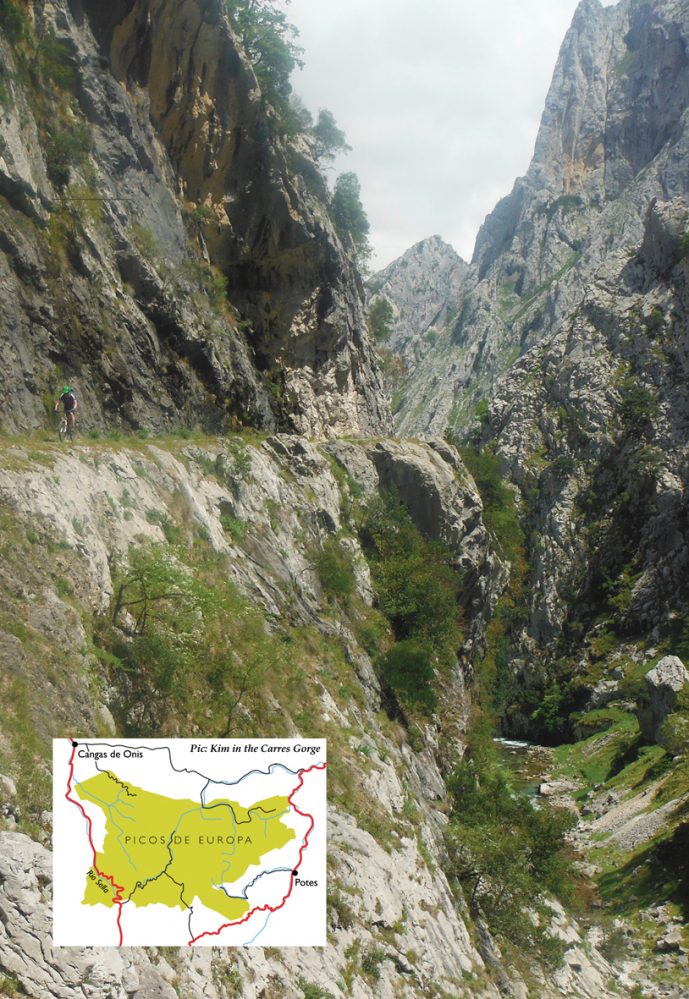 I remember many years ago being told ‘you’re old enough to know better’ and you’d have thought that at the age I am now, I would be. Clearly not! I couldn’t unclip my left foot from the pedal which was the only thing stopping my bike from falling into the river 50 odd metres below. Anyway, more of that later.

Picos de Europa– the peaks of Europe, christened by the Spanish sailors on returning from their jaunts in South America – lie in the northwest corner of Spain and are an absolute gem. What was initially planned as a biking trip turned out to be a holiday with the bike as a mere accompaniment. I had made plans for all day epic rides, but the pervasive atmosphere of the Picos soon crept into me. The speed of life there is a lot slower and so far it has managed to escape the world’s tourism community, although it is a popular destination for Spanish holidaymakers. Refreshingly the people speak little, if any English and appreciate any effort to communicate with them in their native tongue.

The national park that forms a large area of the Picos is relatively small being only 1200sq km. What is surprising though is the diversity of the area, from snow topped rocky peaks with some incredibly deep gorges to lush green pasturelands. The park is home to eagles, vultures, bears and wolves. I was lucky enough to find a wolf stool deposited by the back wheel of the land rover whilst I slept overnight. Another day sitting above the Resecu Gorge bear spotting, any chance of remaining unnoticed was scuppered by a pair of Golden Eagles who kept swooping down on me for a closer look.

The two main towns, which lie in opposite corners of the park, are Potes and Cangas De Onis. The latter, being the larger of the two is a modern bustling hub with lots of shops. Both are great to stock up with supplies and I would recommend using the smaller supermarkets. But visit the butchers, as the quality of the local meat is superb. Wild boar steaks cooked on an open fire as the sun sets, washed down with some inexpensive Rioja is about as good as it gets!

South of Cangas is Europe’s narrowest motorable gorge which runs parallel to the Rio Sella as it tumbles white and foaming from the Cordal de Cuadonga range. It is possible to circumnavigate the park by road, stopping off in some of the many villages en route – this is certainly worth doing as the scenery is absolutely breath- taking with every bend seemingly bringing another spectacular vista. It’s also worth exploring the unpaved roads as they often lead to the remains of old zinc mines, some of which were active up until 1989. 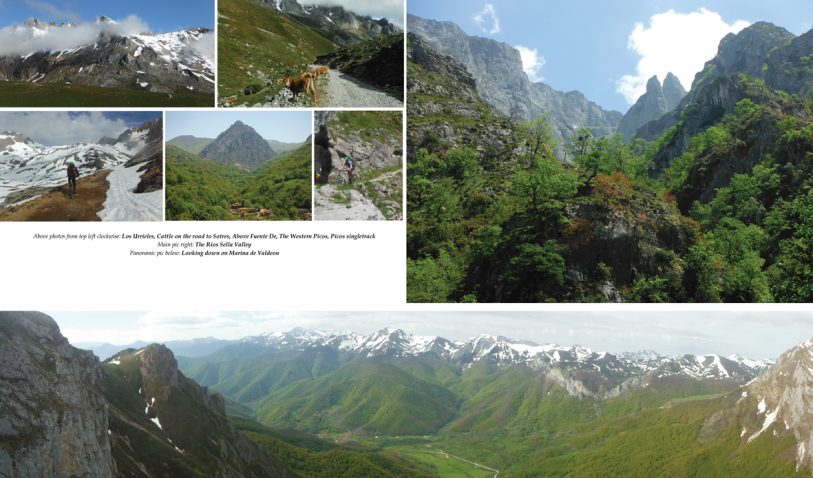 The mountain biking in the Picos is different from anything I’ve experienced before and I think it’s fair to say that to get the best out of a trip there you need a good level of fitness. Some of the climbs are huge; having over a 1000mts of vertical ascent, but the rewards are km after km of fun, fast and sometimes very technical descending. Don’t be put off by this though as there’s biking there for everybody; some of the trails through the pastureland are an absolute joy. I was pleasantly surprised how quickly I adapted to this style of riding, soon learning to switch off whilst climbing, then throwing caution to the wind and putting my trust in the bike on the descents. I was riding well and my confidence was soaring when it all went horribly wrong.

Risk and the different perceptions of risk have always fascinated me. There are all sorts of quotes I could throw in here; generally speaking though, the more you push your limits and get away with it, the more confident you become, so you push that little further and in the process become a more proficient rider. The key is knowing when to stop. 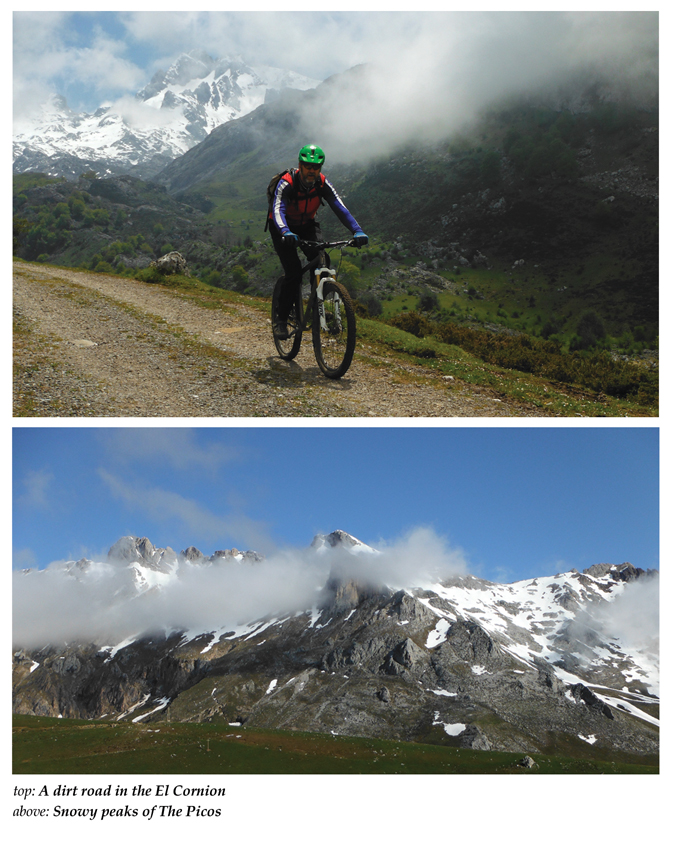 I’d had a couple of good rides and decided to visit the Cares Gorge. From Puente Poncebos there is a footpath that runs the full length of the gorge, however this is closed to bikes. Below this though is an old access track that runs for about 3km before becoming blocked by a landslide. It starts off as a single dirt track and depending on your point of view, gradually deteriorates or improves. I was riding along trying to focus on the trail in front of me, not the rather large drop on my left; it was all going rather well. Ahead was a dogleg at which point the path was less than a metre wide; the consequences of getting it wrong didn’t enter my head as I was so focused on the riding. I hopped the front wheel up and around and as I did, the back wheel slipped off the path and off I came. Oops! Fortunately I managed to arrest my fall but was unable to unclip my foot from the pedal as my left leg was fully extended and the handlebars were wedged against the cliff. My mind was racing and I was starting to slip downwards when a goat hopped over to have a look. I’m not sure if it was a look of pity or simply disgust at my ineptitude but he wasn’t helping the situation. I slipped again, but this time I couldn’t stop myself. As I fell the handlebars became free and using my foot that was still attached to the pedal, I was able to pull the bike upwards, unclipping as I did so. Grabbing the bike with my right hand and a rock with my left, I managed to secure myself, albeit temporarily. Carefully I turned around and slowly inched my way back up to the path, dragging the bike with me. I lay there on my back for several minutes staring at the sky, my heart beating like a drum. Then, inexplicably I began to laugh!

Go to the Picos, explore and enjoy, just be careful in the Cares Gorge!