GREG HEALEY left Swansea in February to embark on a round the world cycle trip.

Last month we followed his progress across North America from Miami to Los Angeles, this month we cover his journey across Southeast Asia. 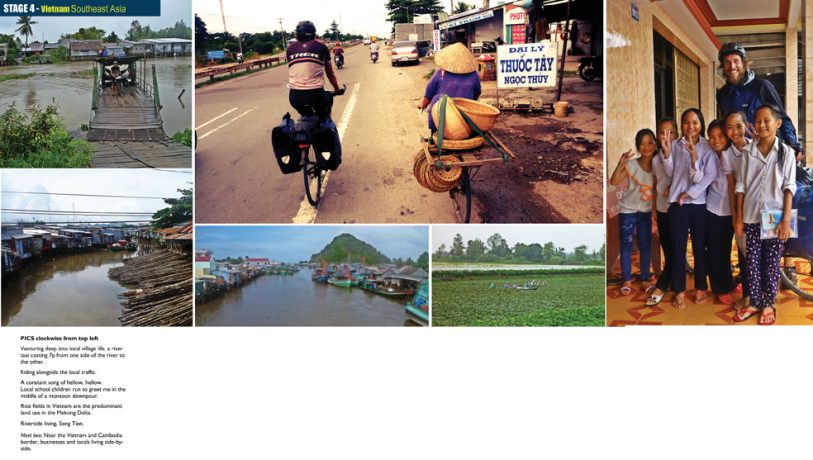 A small group of Vietnamese onlookers gathered with curiosity, jostling one another in eager anticipation of watching a 6 foot 2 bearded Welshman, sweating more than a dog in a Korean restaurant beginning the process of bike reconstruction. With over 4 million scooters and mopeds and around 1,000 road deaths each year, Vietnam’s most popular city is quite simply a traffic nightmare.

With fourteen hours of jet lag, a reconstructed bike and suffocating heat and humidity I  joined a raging white-water of scooters and tuk tuks, a deafening amalgamation of horns, horns, and yet more horns.

Next step was to master the three basic rules of road survival:

(1)If you want to overtake, then do so whilst furiously beeping your horn;

(2)Going the wrong way down a road is fair game as long as you keep left-ish of centre;

(3)If you need to join a road then whoever is feeling most bullish gains right of way.

Two precarious cycle days later and more close calls than I choose to remember I had escaped the worst of the congestion. My route took me through a region in southwestern Vietnam following the Mekong Delta to the most southern border crossing at Ha Tien. A maze of single-lane roads and tributaries densely populated with wooden and corrugated iron homes with vegetation and reed thatched roofs. Humid days were typically separated by torrential monsoon rains which turned roads into rivers and rivers into raging torrents. 300km south of Ho Chi Minh City I ventured deep into the Vietnamese backcountry and in doing so gained a truly incredible insight into village life and culture. The response from locals confirmed that few westerners have travelled such routes. Smiles of excitement and amazement, with wide open eyes, the young to the old erupted with shouts of “hellow, hellow”, waving and shouting, the road had turned into a dirt track but it felt like I was riding down the final leg of the Tour de France, my very own Arc de Triomphe. 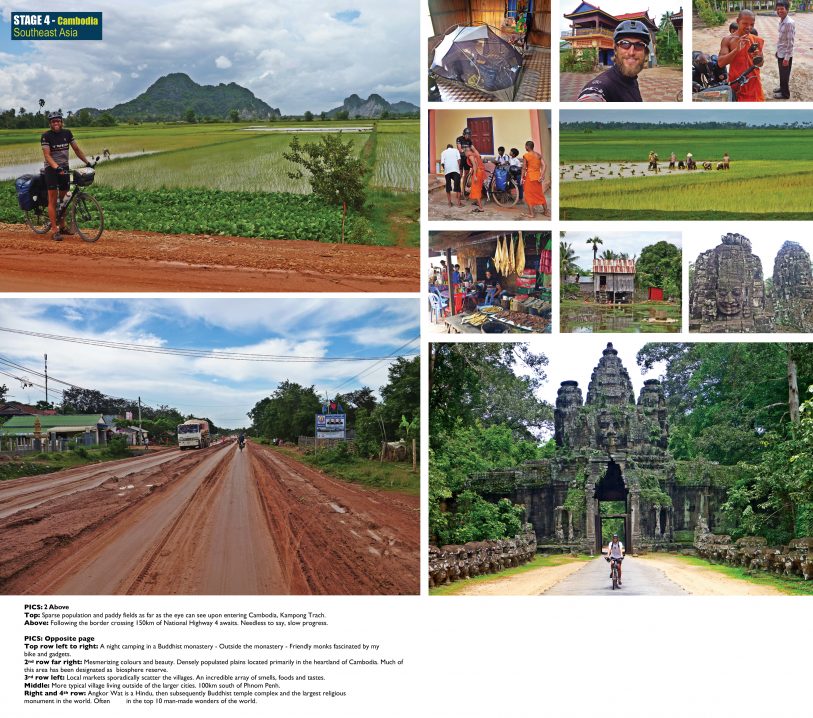 A $1 payment for a medical examination comprising of a body temperature reading by placing an electronic thermometer on my forehead and I had made it through the border to Cambodia. An immediate and stark change in the landscape awaited me, civilization now drastically sparse and lush green paddy fields as far as the eye could see. It is a truly beautiful setting and a world away from the atrocities that are embedded in the recent history of this country when between 1975 and 1979 over three million people died under the reign of Pol Pot and the Khmer Rouge.

After struggling north on a less than appropriately named National Highway 4, which was by far the worst road to date, I arrived at a Buddhist temple as dusk fell which I thought could potentially offer a great opportunity to set up camp for the night. Entering through a large golden archway encrusted with an intricate array of carvings and symbols, inside was a vast square shaped courtyard consisting of laterite and sandstone decorated by lotus flowers and Buddha statues. A lake located towards one side offered a perfectly tranquil respite after a long day in the saddle. Two monks dressed in classical saffron coloured Buddhist robes greeted me and after a few minutes of my best sign language, trying to convey if I could place my tent nearby for the night, they showed me to a derelict meditation room. More than appreciative in having a roof over my head I graciously thanked them and settled down for the night.

“You open door, you open door now”, a stern voice in broken English bellowed through the bars of an open window. Laying in my birthday suit inside the darkened room I slowly awoke remembering that I had bolted the door firmly shut after one of the monks had led me inside at candlelight and shown me where I could sleep for the night. A bed in one corner and a Buddhist shrine in another, the creaking floorboards, thickly draping cobwebs and strange musty scent created an eerie almost surreal atmosphere.

“You must leave now, police here, you go!”

I was definitely awake now. Pulling my sleeping liner over my waist I unzipped my tent and made my way defiantly towards the window.

“What is the problem”, I exclaimed. Looking through the bars there was at least eight men all jostling for position on the first floor balcony, some dressed in official police uniform and others in their sanghati Buddhist robe folded and carried over the shoulder.

“You no stay here tonight, government elections tomorrow and all foreigners must stay in hotel.”

“OK, so why would that be?” I bluntly queried.

“We don’t know who you are, if something happens to you then very bad for Cambodia”.

The conversation continued in a confusing sequence of half explanations and statements but after twenty minutes I finally gave in.

“OK I will leave but I am not going to cycle.”Even with a police escort, a dark muddy road in the early hours of the night was by no means appealing. Another discussion between the policemen and monks and it was agreed that one of the policemen would offer me a lift on the back of his scooter to the nearest guesthouse located 5km away, and with any luck then bring me back at 7am the following day for me to collect my bike!

I returned to the rear of the room, my tent nicely placed near a second open window which offered me a pleasant breeze in the otherwise hot clammy room; after packing away my tent I slid the rusted bolt back from the door and made my way to the awaiting entourage. Bike and baggage secured I jumped on the back of the scooter, having that slightly awkward moment of hesitation undecided if I wanted to wrap my arms around the policeman or take my chances with just a little added thigh pressure gripping the policeman’s hips. The latter thankfully provided just about enough stability for the 15 minute ride. 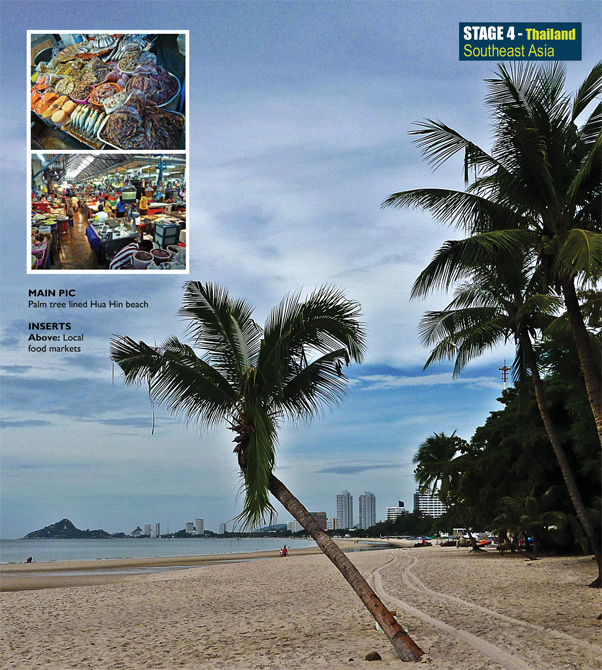 Arriving at the guesthouse no lights were to be seen, just the clear sky and a speckling of stars above. The policeman banged the gates letting out a shout in Khmer, another shriek and a number of increasingly impatient bangs of the gate later he tried the tactic of phoning the number written alongside the placard. Following what seemed a very short and one-sided conversation, in favour of the guesthouse owner, the policeman blurted, “you no stay here”.

“Huh? Is there a problem?” I confusingly questioned.

“It too late, guesthouse no open. We go another”.

“Hold on!”From the extensive discussion through the monastery window I had picked up that this was the only accommodation within at least an hour’s drive. “This is getting ridiculous!”I didn’t fancy backtracking my entire day’s cycle just to find a bed for the night. “Maybe you can speak to your boss and we can work something out?”

“OK we go back to monastery” he said.

So back we scooted. A re-erected tent, sleeping mat re-inflated, bolt firmly back in the locked position and now the added feature of having two policeman standing guard all night. Yes, I think no-one will be disturbing me again tonight!

I continued my journey north through Phnom Phen then westward towards Angkor Wat, a Hindu and Buddhist temple complex and the largest religious monument in the world. It’s a breathtaking labyrinth of incredible sandstone monuments, hidden structures and religious artifacts.

Another three monsoonal downpours later, three hours waiting in line at border control and I passed across the border into Thailand.

Following a tragic oil spill near Koh Samet beach, a picture postcard beach now devastated by 50,000 litres of oil, I decided to have a last minute route modification and take a more direct route to Bangkok.

I ended my visit to Thailand with an exploration of the more southwest coastline, of beautiful white sand beaches, turquoise oceans, and palm trees. A fitting end to a 1,500 km cycle through southeast Asia.

Bike tightly wrapped and packed in a very used cardboard bike box, next stop is India. A 2,500km cycle from Kolkata in West Bengal to Kochi in Kerala.