GREG HEALEY left Swansea in February to embark on a round the world cycle trip.

Last month we followed his progress across South East Asia, this month his journey continues across India during the monsoon season.

If you have missed any of the previous instalments, they can be found on our website in Lifestyle and Leisure. www.theswanseabay.co.uk

With my minus twenty sleeping-bag firmly to the bottom of my pannier and Imodium to the top, I embarked on the next leg of my adventure, a 2,000km ride through India. I figured that with a total of 15,000km ridden across eleven countries covering an average distance of around 160km per day under my belt, including riding through sleet, snow, torrential rain, the driest place on earth and through some of the hottest temperatures in recorded history, camping through hurricanes and surviving freezing nights, I was ready to take on the 2,000km ride from Kolkata to Mumbai. 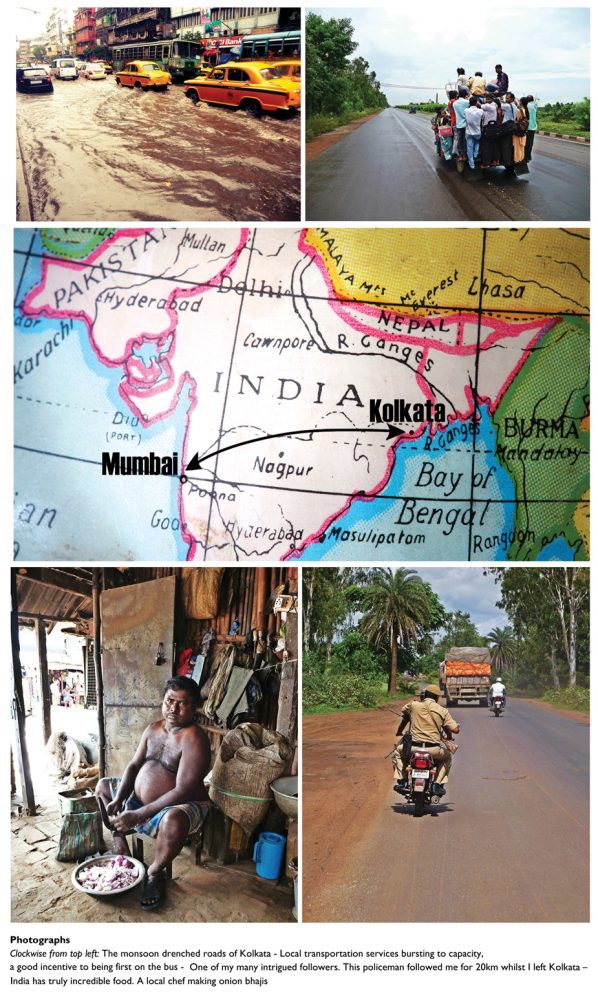 Nothing can quite prepare you for cycling through India, especially during the monsoon season. The first few drizzling pitter-patters quickly transform into a blinding deluge of fierce horizontal sheet rain. Feeling more like I was trying to ride through a swimming pool whilst being fired upon by a team of fire truck water hoses and at the same time playing a very real life version of Hopper, I was just minutes into my journey through Kolkata and encountering some of the most difficult riding conditions I have faced to date. Trying to dodge the pot holed roads, a deafening circus of horns, tuk tuks, scooters and trucks kept me more than occupied.

Cows and goats claimed right of way whenever it suited them and a plethora of bustling street life, from food carts being pushed on rusty old bicycles to small wooden shacks selling everything from penny sweets to truck tires. I had a front row seat to the greatest show on earth.

Kolkata and its suburbs has a population of over fourteen million which is yet dwarfed by the more than one billion population of India in its entirety. It is never quite possible to escape the noise, congestion, pollution and at times devastating poverty, combined with roads ranging from single-lane dusty mud tracks to once tarmacked dual carriageways now pitted with crumbling rubble, all of which gave rise to very long days in the saddle. India was in every sense a test of mental perseverance but a dose of blind naivety certainly seemed to help.

My journey west took me through remote villages and exotic jungles. I had the amazing privilege to see wild monkeys, tigers and elephants, beautiful rolling hills bathed in dense woodland and vast rivers lined with wooden huts and countless villagers bathing and washing, cooking and fishing.

India is awash with vibrant colour and passionate spirit andcan at times make the rest of the world feel like it is being viewed in black and white. From transportation trucks encrusted with statues of gold and complex mosaics of swirling patterns to hotel rooms decorated with countless colours ranging from hot pink to minty green, India is a sensory feast and culinary utopia.

Days on the bike were typically broken up every twenty minutes or so by cars, scooters, trucks and even police riding alongside me inquisitively enquiring about my journey, some plucking up confidently half spoken questions of “Where you are?”and “How much bike?”,quickly followed by the customary wagging of the head and huge smile. Due to the unpredictable heavy monsoon rainfall at nights I was mostly restricted to staying in lodges and hotels, these varied vastly in quality from western standard to cockroach and ant-infested, blood and mould-stained caverns. Following a particularly bad night and complete lack of any type of accommodation within a rideable distance before sunset,

I decided to opt for a night in my tent near the rural village of Basna. The day thus far had been somewhat unseasonably dry and whilst leaving the village I came upon what seemed a tranquil setting, a beautiful green expanse which stepped down to a gentle river to one side. As dusk fell, the last few remaining villagers made their way home in the dimming light, with my tent erected I took a final look up at what looked like an increasingly ominous sky and settled down for the night. 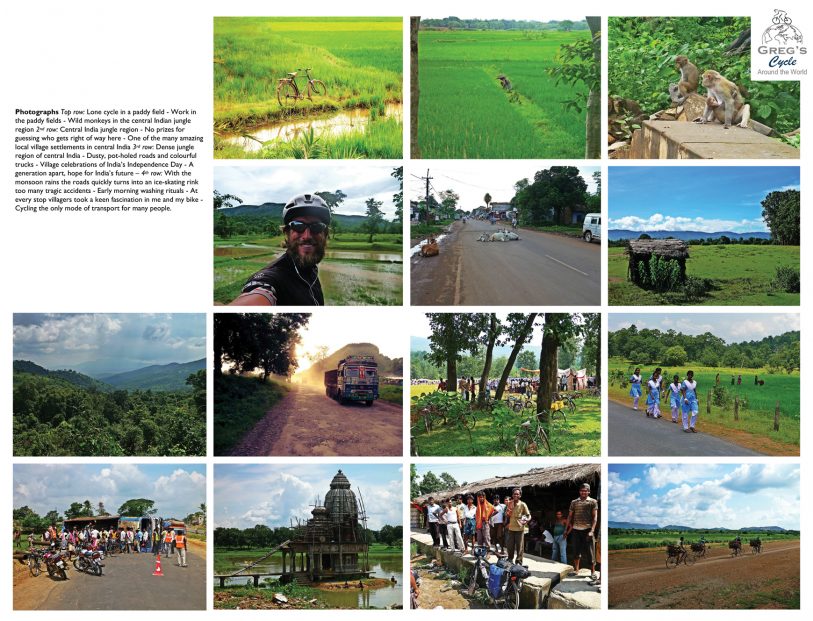 Minutes later, with my head torch now being the only source of light, the first roar of thunder exploded above. I could hear the hollow sound of the rain starting to hit the outside of my tent which quickly turned into a deafening and unrelenting onslaught. Flashes of lightning lit up the inside of my tent followed quickly by a terrifying noise which sounded more like the whole earth cracking in two. The still increasingly powerful downpour was thrashing my tent from side to side; water now beginning to pour in over the sides of the netting inner sheet and a subtle vile stench engulfing every breath. Moments later the water was now freely flowing beneath me, I held firmly onto my panniers but it was now too late to turn back, the only thing barely holding the tent from being washed into the river was me sitting in it. My hand had been dealt; it was going to be a long and very wet night.

I awoke early the next day, water still stained the inside of my tent but the river had subsided and left a knee deep field of mud, a sight more typical of a Glastonbury weekend.

Peering out of my tent, ten, twenty and then thirty villagers were making their way down to the fields. With all the attention I had been getting I could imagine that seeing a drenched Welshman knee deep in mud trying to pack up a tent would have been quite an entertaining morning sight, but no, they were not even giving me even a second look. Whilst carrying a small pail of water in one hand and soap in the other, everywhere I looked men were squatting, hunched over whilst chatting, laughing and joking. With the grim realisation that I had just spent the night in the village toilet I sighed and thought, ok, well when in Rome. Packing up my tent and feeling slightly worse for wear I got back onto my bike and quickly made my exit.

The further west I ventured the increasingly better the road conditions became but in almost perfect synchronicity the headwinds provided ever more punishing riding conditions.

This led to agonising days in the saddle; I was typically spending upwards of ten hours cycling each day with at least six hours of which was standing up out of the saddle to gain maximum power against the crippling winds. With battered tyres barely holding air and an exhausted body I arrived early one morning into Mumbai. Within minutes of riding through the congested city I was greeted by three cyclists. After a brief conversation whilst trying to dodge the customary traffic and accepting an invitation for breakfast, I was enjoying a hot glass of sweet Chai and the company of some great new friends. Through an amazing coincidence one of the three had spent some time in Swansea and Mumbles while his wife attended Swansea University, now a Bollywood movie star I was thankful that he was diverting all of the locals’ attention. A fantastic end to my journey through India.

Next stop Turkey and my final leg, a 4,000km ride from Istanbul to Swansea. 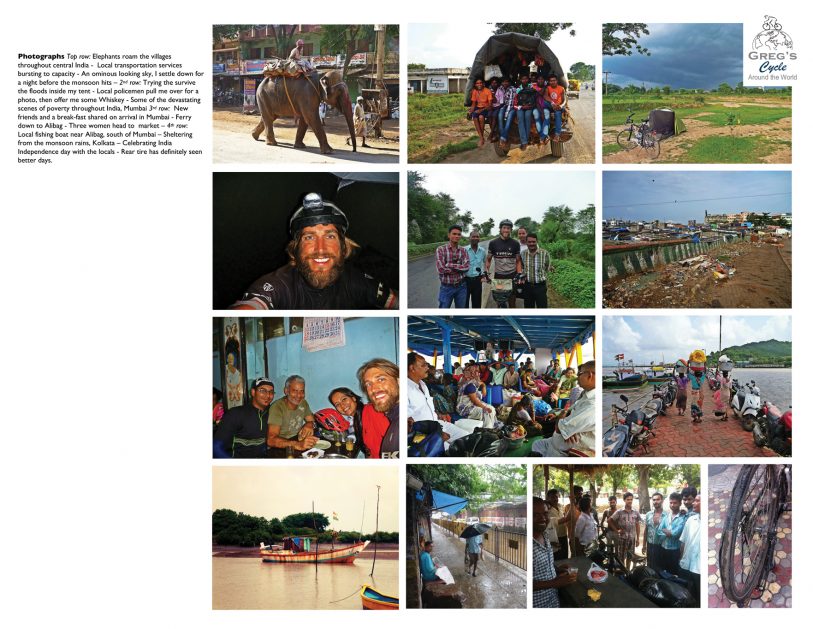