Paella is a controversial dish as there is no ‘original’ paella recipe. So what exactly is Paella? Well this dish actually takes its name after the pan it’s cooked in and although there is no strict recipe, there are a few common methods and ingredients used in its preparation.

It’s a hearty dish mainly made from Bomba rice, an old strain of rice grown in the mountains of Calasparra.  It is flavoured with either meat, fish or shellfish stock depending on what’s in season and your location – the seaside or the mountains. It will also contain some vegetables, pimenton dulce (sweet paprika) and saffron. But, contrary to most Spanish cooking, there is no onion or garlic in a true, regional paella recipe. 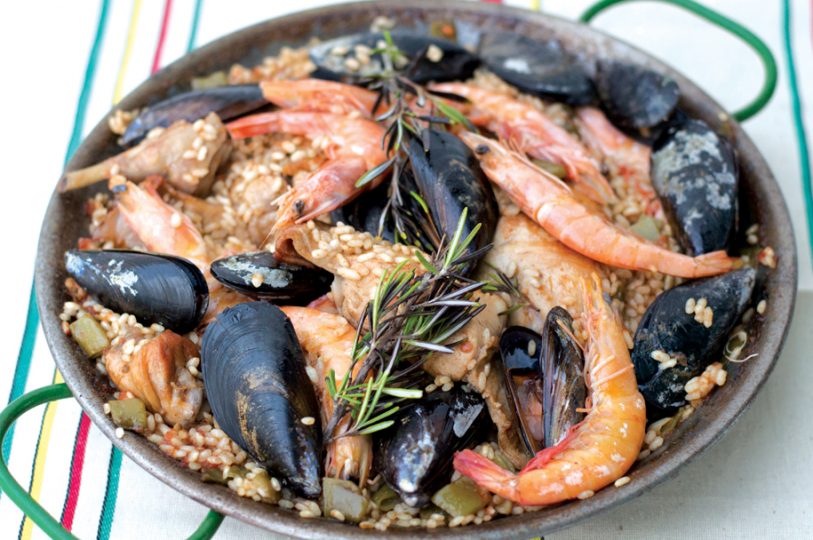 A pinch of saffron threads

A fresh sprig of rosemary

Tip #1:The first thing to pay attention to is your paella pan. It should be a good quality pan, made out of carbon steel, fairly heavy – but thin, completely straight and with a dimpled bottom for an even distribution of the heat. Each handle should also be well secured to the pan with 2 rivets and should be located halfway up the pan side (this will make sense later).

Pour the olive oil into the paella pan and heat it up on a high flame. Once the oil starts to smoke turn the heat down to medium, add the rabbit, slightly salted, and fry until golden. This is one of the most important stages of the paella and it’s very important that all the meat shows a dark gold colour.

Tip #2:Rabbit is the Spanish choice of meat when it comes to paella, for its flavour and tenderness, however it will go very well with hare, chicken or guinea fowl. Just make sure that whatever meat you cook, you do it on the bone as it will go very tough and dry otherwise.

Now add the runner beans, and give it a stir allowing them to soften for a couple of minutes. At this point lower the flame to a minimum and, with the help of your spoon, make a well in the centre of the pan. Add the tomato and lightly mix. Allow to cook for a couple of minutes before adding the pimenton to the well.

Now add your water, which should come up almost to the top. Add salt and allow to cook for about 30 minutes adding more water if it’s necessary. After 30 minutes the water should be at the same height as the paella handles.

Tip #3:I told you it would make sense, the rivets of the handles of a paella work as guides so we know when to introduce our rice

Tip #4:  Before anything else try the stock and test for salt. The stock should be quite rich and slightly too salty as the rice will absorb most of the salt.

This is one of the most important stages, the adding of the rice. The rice should be added in a line across the paella and be above the stock by two centimetres. Now spread your saffron over the rice, and mix well until it looks uniform. Boil on a high heat for exactly 7 minutes until the rice starts to steam.

Tip #5:Bomba rice is a slow-growing rice that can absorb up to 3 times its volume, it will however retain its shape and give you a very specific flavour so please don’t use any other type of rice.

Tip #6:The line starts and finishes in-between the rivets of the handles so you always know you made a straight line.

After the 7 minutes add your prawns and mussels, lower the heat to minimum and cook for a further 5 minutes. Add some fresh rosemary to the top.

Tip #7:make sure to scrub the mussels and pull out their beards. If they are open give them a tap and see if they close back up, if so they are fine, if not discard them. Discard the ones with broken shells.

Now check that most of your stock has been absorbed and if so, cook for a further 5 minutes on a very low heat. If on the other hand your paella is still quite wet, have the paella cook for the remaining 5 minutes on a medium heat.  At the end the paella should be cooked for 17 minutes.

This is a difficult stage where you have to judge the state of your paella. However, bear in mind that it’s always preferable to have a slightly wet paella, than a burnt one.

Now take the paella off the heat. Since the rice will keep on cooking it’s important to let it rest for at least 5 minutes, covered with some foil. This stage will help any residual moisture to be absorbed and will make the rice softer.

Tip #8:Serve with a nice glass of Rioja. 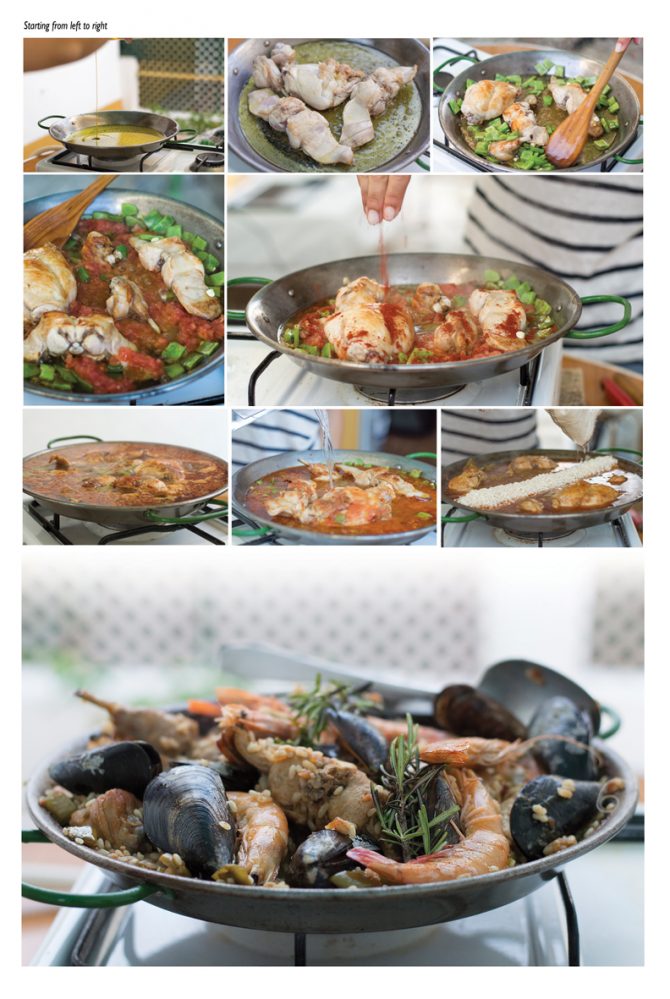