On 10th October GREG HEALEY cycled into Swansea Bay over seven months after he embarked on a bike ride that would take him around the world. Greg left Swansea in February to begin a cycle trip of a lifetime; TheBAY has been following his progress and was there, on the seafront, along with family and friends, to welcome him home.

In this, the final instalment of his journey, we read of his trek from Istanbul to Swansea via the Alps and the Pyrenees. 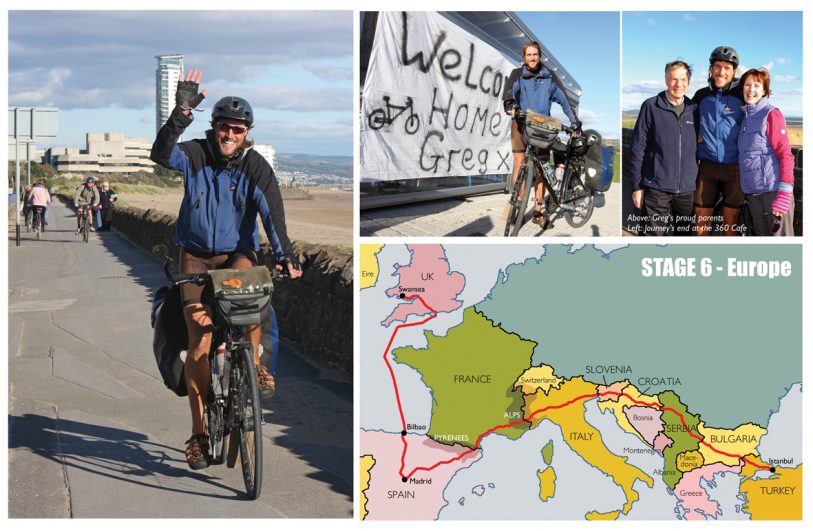 Arriving in Turkey I was full of excitement and a calm feeling of almost being “home” engulfed me. My first mocha Frappuccino since LAX (Los Angeles Airport, USA) slowly melted as the warming early morning sun lit the airport arrivals lounge, and a final bout of bike reconstruction commenced. After a few frustrating hours trying to escape the bustling city of Istanbul which included a quick, yet unavoidable, 10k dash down the motorway I relaxed into my saddle and drew a sigh of relief, “ahhh the final stretch, how bad can it be?”.

A few days in, the last ounce of adrenaline drained away with the awakening realisation that in fact I had a gruelling 3,500km ride ahead through ten countries which included a pass over the Alps and Pyrenees. I was tired, tired to the core, at times lonely and the seven month ordeal had certainly taken its toll on my body. But it was back to business, let Europe commence. 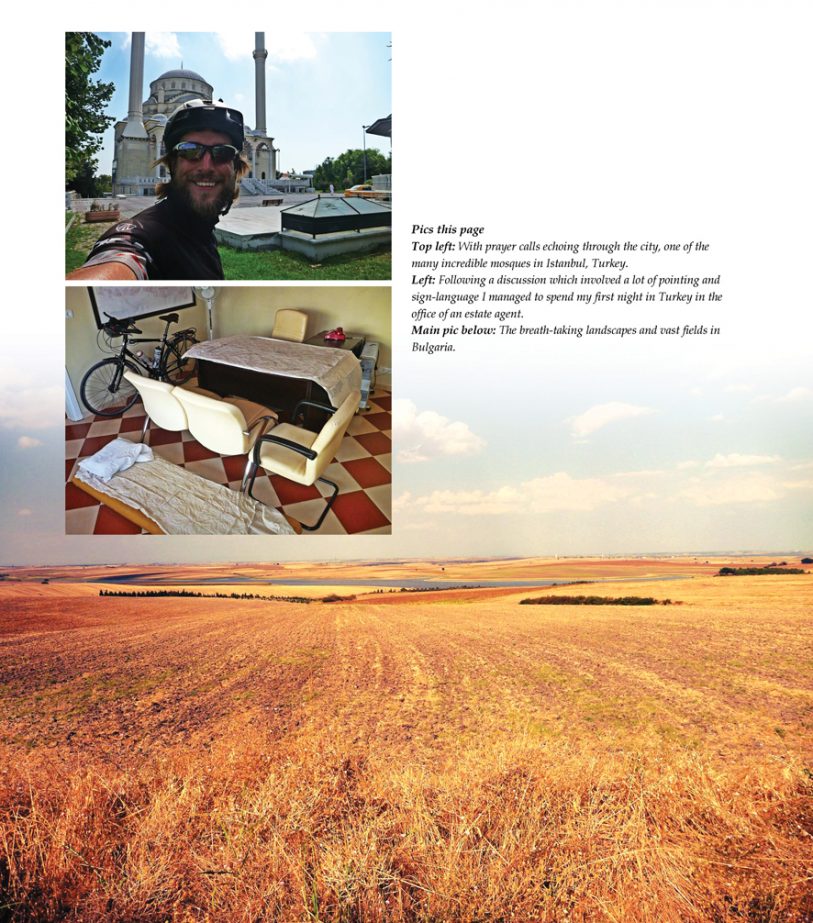 Following a failure of my front wheel dynamo power system I re-engineered a plan B by attaching a solar panel to my helmet. Although it provided just enough power to charge my phone and mapping system I was now lacking music. Perhaps a minor point but whilst already feeling physically exhausted, covering back to back ten hour cycle days, camping wild and experiencing what seemed like a new language and currency every few days it was now down to my endless stream of random thoughts to now offer entertainment. Whether it was trying to figure out what day it actually was, or finding numerous different ways of trying to count down the remaining cycle time each day, which perhaps doesn’t sound very entertaining, but after seven months of myself and I, I quickly ended up having lengthy conversations with myself in order to try and keep an element of sanity… or perhaps that is precisely where I was going wrong. Having cycled through Turkey, Croatia and tackling the hills, rain and cold in Slovenia I was now making my way across Italy for a date with the Alps. 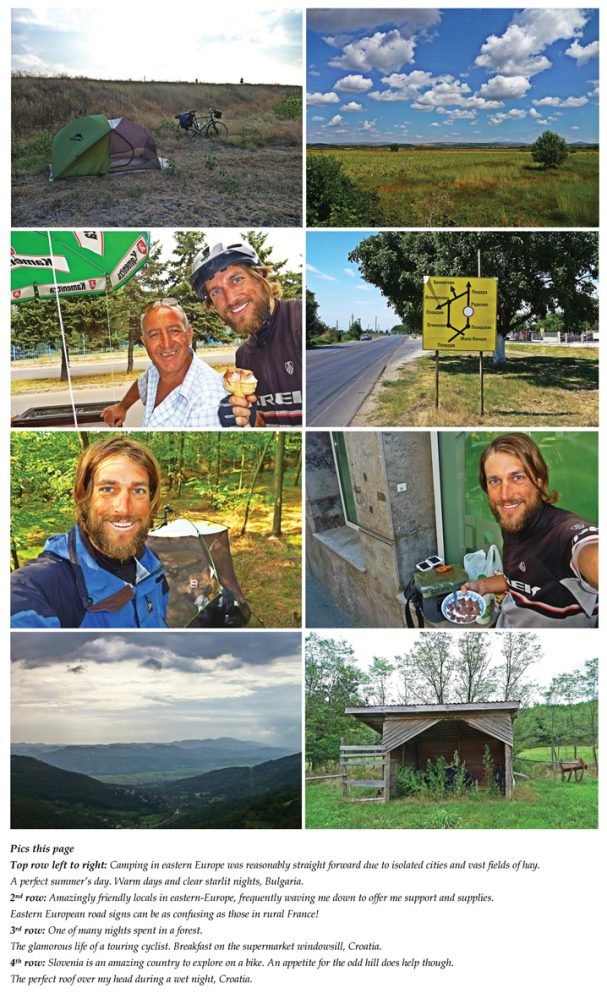 It seems that every time I have to face a mountain range I hit a storm half way. Well the Alps were no exception. The initial comparatively gentle incline quickly developed into what seemed an endless weaving of s-bend roads scouring the mountain face far into the distance. With the clouds thickening and becoming progressively darker, a faint cloud-like dew built into a drizzle and, within a moment, a lashing of swirling wind and bitingly cold horizontal rain put the final rays of summer to rest. With the smell of thunder hanging in the air and a quick stop to dig out my winter gear from the bottom of my pannier, I had made it over the high pass.

A look back provided a breath-taking vision of vast jagged rock faces reaching high into the clouds. Snow and ice glaciers far into the distance were bathed in a tranquil sunlight which turned into a turquoise basin of lakes and towering waterfalls enriched in colour. With an increasingly ferocious wind and dimming light I found what seemed to be an old snow shelter a further 50kms from the high pass which offered fantastic panoramic views and a perfect respite for the night.

The following morning I was greeted by a perfect mountain sunrise and a slightly cool fresh wind which didn’t cause too much discomfort given that I still had at least 200kms of mountain terrain to help increase the body temperature. My three day, 400km cycle through the Alps took me from Cuneo in Italy to Montpellier in France, a route filled with remarkably untouched beauty and highly recommendable for any avid cyclist.

A further two days of torturous headwind and a slightly unexpected and demanding climb over the Pyrenees and I had made it to Spain. The remaining 700km to Madrid although very hilly was perfect cycling weather, with temperatures of around 30 degrees C and almost no wind gave me a real boost. The adrenaline started to flow again and the major part of my European leg was within touching distance. 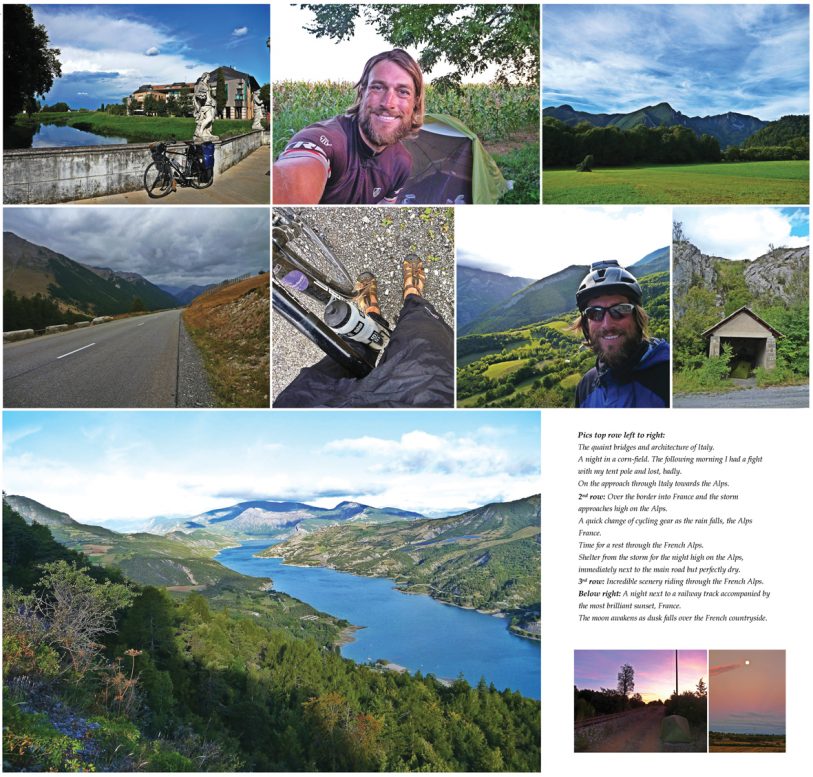 After almost 200 days of wild camping, which included camping in virtually every imaginable spot from corn fields to apple orchards, beneath bridges to being perched on motorway ledges, I definitely saved the best for last. After taking the slightly longer route around a mountain tunnel, scrambling over a roadside barrier and through a fence I was greeted with one of the most incredible views over the Rio Tajo imaginable. Embedded into the mountain side was a perfect roofed platform which looked more like the emperor´s box from the coliseum. Still not quite believing my incredible luck I settled down to watch the sunset over the glistening lake surrounded by rolling green hills. The cyclist diet is typically governed by food availability and whatever random food craving for the day pops up, dinner for that night comprised of two Spanish omelettes, four chocolate doughnuts, six chocolate cookies, two peaches and a celebratory can of 0.5% vol Spanish beer. Life doesn’t get much better than this!

In my final few days cycling through the UK, over the Severn Bridge and back to Swansea I was greeted by a perfectly blue cloudless sky, a mesmerising sunrise warmed an otherwise cool morning. My incredible journey was coming to an end. My mind was filled with endless stories, memories and a whole world of new friends. What started with one second hand bike, followed with a few repairs here and there on the way which included, 1 rear hanger, 2 derailleurs, 2 cassettes, 2 saddles, 3 wheels, 5 chains, 8 spokes, 12 brake pads and 21 punctures, ultimately resulted in a truly unforgettable 226 days of adventure through 18 countries, covering a distance of 19,794km and 16 times to the summit of Everest and back in altitude gain.

The next adventure awaits… 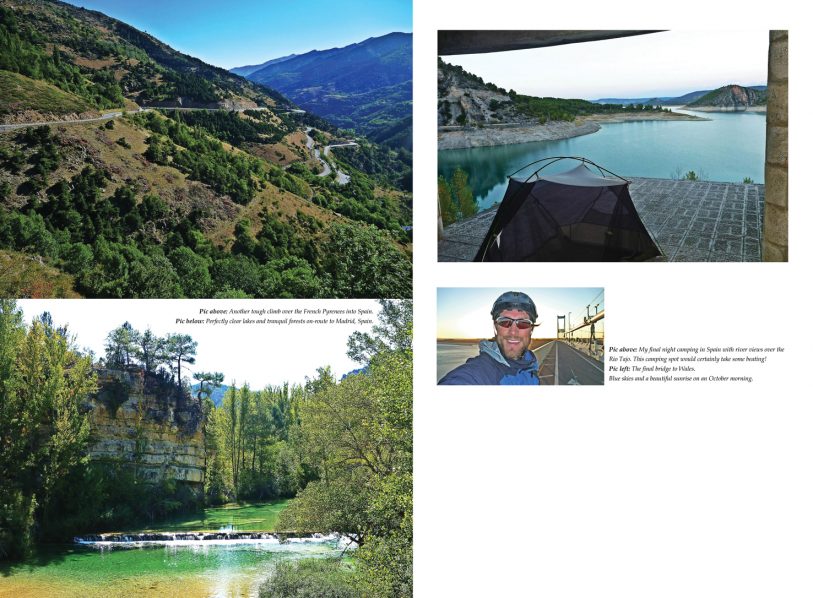