It’s no secret that car designers the world over have been inspired by what’s gone before.

Ian Cameron’sgorgeous BMW Z8 for instance played more than just a little homage to the mid 1950s Bayerische Motoren Werke’s 507. Peugeot’s 208 GTi has more than just a passing resemblance to the mid ‘80s pocket-rocket that was the 205GTi and who could argue that Jaguar’s long awaited return to sports cars, the F-Type doesn’t owe more than the odd one styling cue or two to its legendary Malcolm Sayer designed forebears; namely the D and more obviously the E-type.

Whether it’s walnut dashboards and Connolly hides in a Bentley or a Royce, or tartan trimmed seats and a golf ball shaped gear-knob in your GTi, it’s probably safe to say that guy in the rimless specs and the roll-neck who got the credit for having designed such things probably drew his inspiration from his employers, or maybe even someone else’s, back catalogue. And let’s face it, the likes of Porsche and Morgan have made doing such things for decades.

In the late nineties though, car manufacturers went a step further. Rather than just copying (I use the term lightly to avoid litigation) the odd air-duct or taillight design, they went all nostalgic on us, like the Beatles and The Stones they launched re-mastered versions of their old classics.

Volkswagen, I think was first, with the Beetle, quickly followed by BMW with the MINI. A whole host of retro look machinery followed; Jaguar’s X and S types, Fiat’s 500, Ford’s new old-shape Bullitt Mustang, and even Mercedes got in on the act with the SLS AMG, their modern day version of the Gullwing.

What I’m rather slowly getting round to telling you about, and which, ironically, I’ve been driving the very same week as BMW announced their all-new MINI, is the rather funky new VW Beetle. 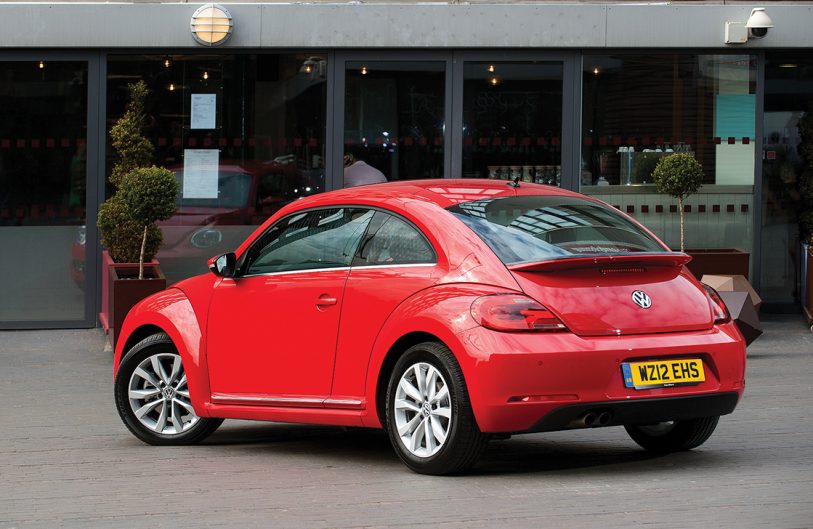 Funky? Well I think it is. And that’s not just because there’s a Fender stereo.

The new Beetle pays homage, shape-wise at least, to its 22 million selling grandparent far more closely than its 1990’s predecessor ever did. The whole car is wider and altogether less cartoon-like than that of VW’s previous incarnation. Dare I say it…? It’s far less girly too.  It’s still unashamedly very curvy – it’s a Beetle – however the roofline is lower, and closer in profile to that of the original. So too is the windscreen, sitting behind it you’d swear it was flat.

Once inside you could easily be forgiven for thinking you were in an original Bug. The body-coloured dashboard -it’s optional, I sampled a design spec car – and the windows are set quite high. The steering wheel sits near vertical and, thanks to reach and rake adjustable column, nicely close to your chest, and yet despite the thicker A-pillars, the visibility rivals that of a goldfish bowl. Drivers of Volkswagen’s more sober styled fare will recognise most of the switch gear plus the air-con controls and the combined DAB/sat-nav unit, although the hardness of some of the plastics, especially the dashboard top may come as a bit of a surprise – as will perhaps the industrial strength elastic straps that double as door pockets. Needless to say though, being a VW, bank-vault-like solidity comes as standard.

Turn the key and what immediately becomes apparent is just how quiet things are. Forget any notion of any air-cooled chuntering from the rear; today’s Beetles are front-engined and front wheel drive. And if they’re fitted, like the one VW lent me, with the 1.2 TSi engine, they’re automatic too.

In fact the seven speed DSG ‘box is the only choice of transmission available on the turbo-charged 1200. Keener helmsmen, myself included, will argue that this combination lacks any real feeling of driver involvement (why VW did you not fit flappy paddle shifters?), and that as a result of its modern-day underpinnings the Beetle perhaps lacks a little of its old character. There’s no denying though that the105 bhp provides more than sufficient oomph for day-to-day driving and the seamless gear-changes make the most of the available power.  The steering is nicely weighted too, without ever feeling over-light as some electro-mechanical systems sometimes do.

Incidentally, the gearbox’s chunky selector lever is the same one as you’ll find in an automatic Porsche 911 – a nice touch. Good to see that even after all these years and various incarnations of both cars they still share at least a little something. But then trust me to notice that, what’s far more important is whether or not this modern day Herbie is actually any good or not.

The truth is today’s Beetle isn’t nearly as practical as a similarly priced Golf – the car with which it shares most of its oily bits – or indeed VW’s cheaper Polo either. It’s strictly a four-seater, comes only as a three-door, the boot isn’t that big, and the ride is firmer than you might have expected too. But let’s remember something; without the Beetle in the first place there’d be no Golf, no Polo or indeed no Volkswagen.

The new Beetle is definitely one for the fans, and if retro styling is your thing this is probably as good as it gets. 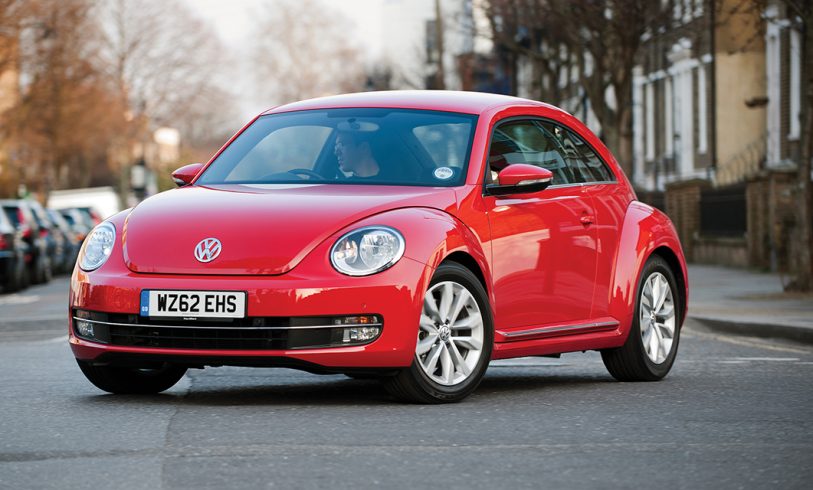 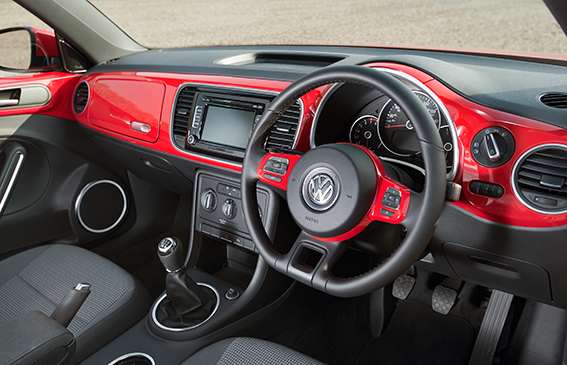 Many thanks to Volkswagen’s UK press office for the loan of their Beetle / www.liam-bird.com/ @bird_liam