Monday, Monday, so good to me

For most of us the Monday morning drive to the office is just part of the tedium of the working week. But if you’re Liam Bird it can involve driving a fantasy supercar – on this occasion the McLaren MP4-12C Spider – to the home of British motor racing, which sounds pretty good to me… 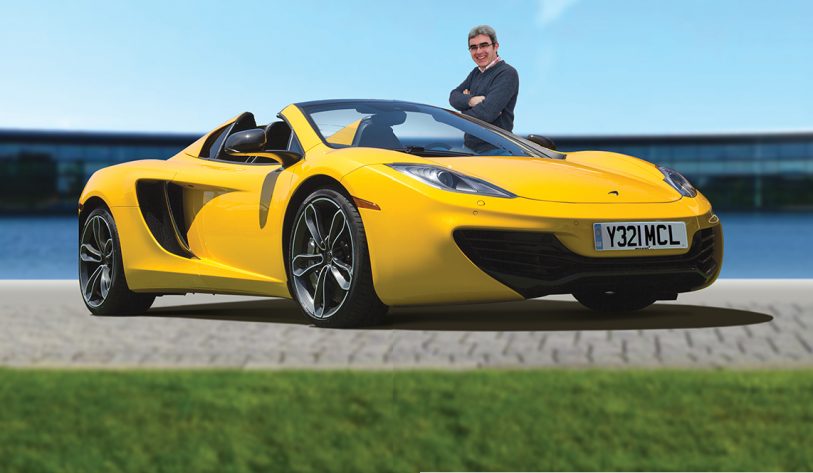 Decisions, decisions; an about-turn at the roundabout ahead of me and I’d soon be back at the MTC, the almost science-fiction-like HQ of Formula One legends McLaren. A left would take me to Brooklands, the first purpose built motor circuit ever constructed on British soil. A right and it’s the A320 through Woking.

Turning back isn’t an option. As much as I’d love to wander around the McLaren Technology Centre, reading the inscriptions on the multitude of trophies and gazing at the cars, McLaren are very particular about who goes where once you’ve got past the gatehouse – even photos aren’t allowed in here. And, call me old fashioned if you like, but as emotive as the old banking at Brooklands is, I tend to prefer my racing circuits fully intact and without the addition of retail parks, so a left it isn’t either. The A320 it is then.

I flick the slender indicator stalk upwards and nose out into Monday morning’s commuter traffic. As the oil, water and the snug fitting cabin of the MP4-12C Spider warm through, I make my way towards the village of Send and then on towards Farnham.

“Are you looking for Mike?” asks the gardener trimming the hedges, as I pull in to the cemetery on West Road. “Your car, it’s a bit of a give away. Mike’s over there, in the corner, next to his father”.

John Michael (Mike) Hawthorn was Britain’s first world champion racing driver. Securing the title in 1958 he took the title by just one point, beating a bloke called Stirling Moss in the process. After announcing his retirement at the end of that year’s season, due in part to the tragic death of his friend and Ferrari team-mate Peter Collins, Hawthorn decided to return to Farnham to run the family garage. On January 22nd 1959 he was killed when his Jaguar left the Guildford bypass and struck a tree. To this day, no-one’s quite sure what exactly happened.

I pay my respects to “The Farnham Flyer” by thumbing the Spider’s starter and indulgently blipping the throttle a few times before engaging Drive and making my way south, and back out on to the A3. Quite what the onlookers thought of my 8 cylinder symphony as I left the cemetery gates I’m not quite certain, but I’d like to think both Hawthorns junior and senior would have approved.

Heading to an appointment just north of Chichester, I let the Spider’s auto-box find its own way into seventh gear before leaving the dual carriageway, circumnavigating the pretty market town of Petersfield and crossing the border into West Sussex. First though, there’s time for a little fun.

Up until the early ‘20s the road to South Harting doubled as a hill climb circuit. So, seeing as the sun’s come out, I fold back the Spider’s roof, switch the gearbox into manual, and roll its power-delivery setting round to Track. With 616bhp at its disposal, a carbon fibre “tub” chassis and steering that was signed off by both Lewis Hamilton and Jenson Button,

the MP4-12C makes astonishingly light work of the sinuous climb. A couple of flicks on my left index finger and a flex of my right toe and within seconds the digital speedo is showing a third figure. The long straights and flowing curves that lead me past Chilgrove are devoured in what feels like a warp-speed blur.

My destination this morning is Goodwood because the motor circuit links both Hawthorn and McLaren. Hawthorn made his first appearance in a racing car here, McLaren unfortunately his last.

In 1959 as the world mourned the loss of one Formula One legend it gained another.

Bruce McLaren took victory in the U.S. Grand Prix at Sebring of the same year and became the then youngest man to ever win an F1 World Championship race. In June 1970 the racer-turned-constructor was tragically killed on Goodwood’s Lavant Straight when the rear bodywork of the M8D he was testing came adrift at speed. The lack of aerodynamic down force destabilized the car, causing it to spin, leave the track, and hit a trackside bunker.

In the Brooklands Garden behind the circuit’s pit buildings and just steps away from a statue of Hawthorn, there’s a simple yet elegant memorial to the softly-spoken New Zealander whose name is as equally synonymous to motor-racing as that of Tyrrell, Brabham or Ferrari. Bruce McLaren was just 32.

Kindly, I’ve been granted 20 minutes on the hallow tarmac so that I can photograph the Spider. Driving slowly out onto the grid, the temptation to take a lap of the circuit is almost too great. However, the significance of a (nearly) orange McLaren, at Goodwood, on a quiet day isn’t lost on me and no matter what my ability behind the wheel it’s probably unlikely that I’ll ever be a F1 world champion: besides, the drive down here demonstrated the Spider’s limitations are way beyond mine.

Images captured, I make my way respectfully across the paddock, then north via Woking, and back through the gates of the MTC. 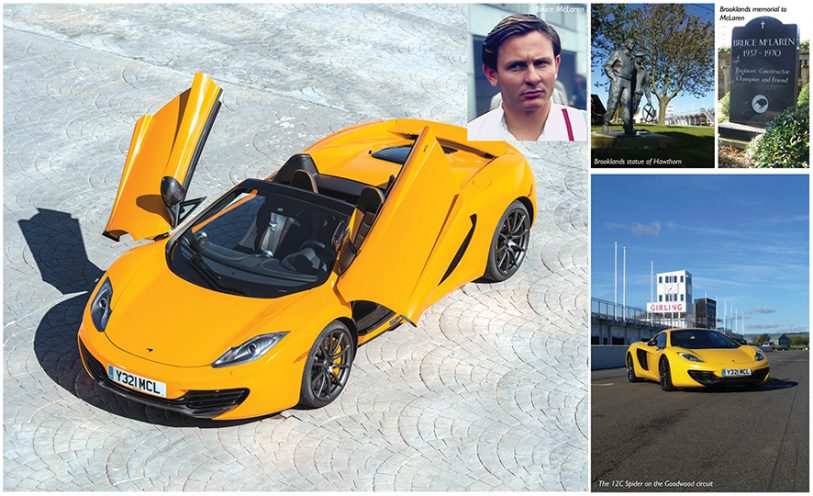 Thanks too, to Gary, Gema and Lee at Goodwood