Last month Liz reported on her visit to Kerala in southern India. Kerala is a coastal Indian State which boasts the highest literacy rate in the world and the lowest population growth rate in India. Politically, Kerala has always had a strong Communist bias. 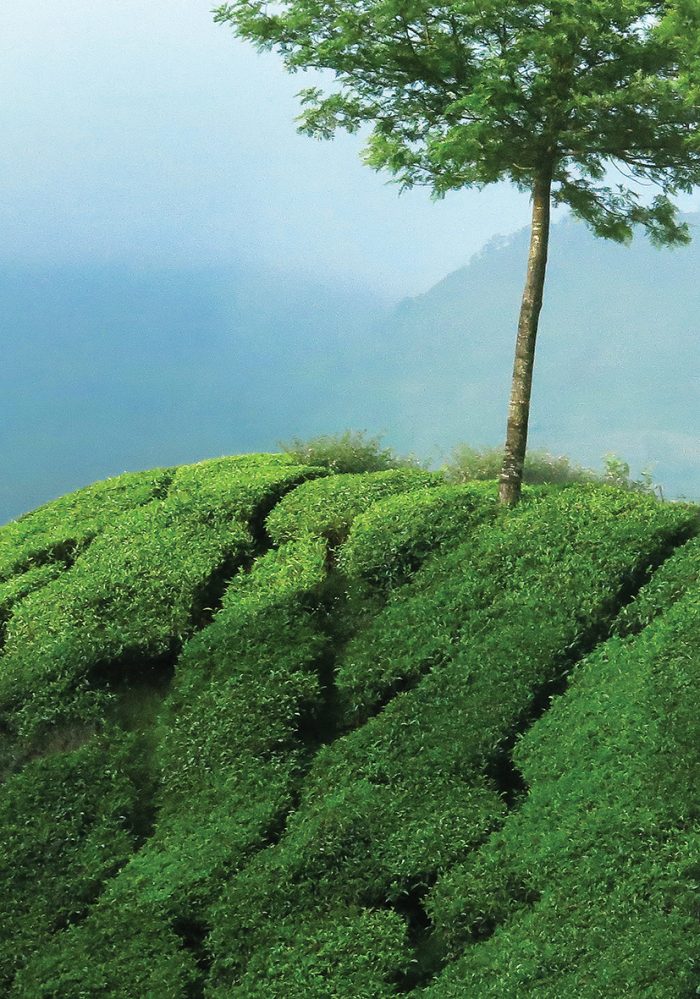 Liz continues her journey and travels up into the cooler mountainous region of Munnar.

Kerala is known for its spices; travellers from around the world arrived here to trade and it was certainly responsible for Vasco da Gama’s quest for the Indian subcontinent. Pepper is the king of the crop, cardamom the queen and the trump card is tea.

We leave the tropical backwaters behind and the landscape becomes far greener and the trees more dense. Along the roadside, monkeys scampered around picking up titbits from the passing tourist traffic. Our route twisted and turned as we steadily climbed to the cooler hill station of Munnar which translates as three rivers. Munnar is fed by the mountain streams Muthirapuzha, Nallathany and the Kundala – it sits 1600m above sea level along the Western Ghats and was once a summer retreat for the British Raj.

In the 19th Century John D. Munro from the British East India Company visited the area and realised the crop growing potential and leased the land with the assistance of a local tribal chief Kannan Thevar. The hills were covered with coffee and cardamom plants although this was later abandoned and tea cultivation was initiated by a European planter called A. H. Sharp.  In time a larger company bought out independent estates and eventually shares were sold to Tata Tea Limited, which is now one of the world’s largest manufacturers and distributors of tea.

In the town of Munnar is the Tata Tea Museum which features photographs and equipment relating to tea production. A film traces the history of the tea industry in this region and reveals how local tribesmen assisted in surveying the area and their involvement in the enormous chore of transporting equipment for production. This included a train that was manufactured and transported all the way from England. As a confirmed coffee drinker, I was pleasantly surprised when I sipped a cup of cardamom chai (tea). It was sweet with a spicy aroma and I was told it had great health benefits, though I won’t be converting just yet.

Nestled amongst the mountain ranges of Kanan Devan and the BisonValley our hotel, the Spice Tree resort opened only a year ago. Breath-taking views across the valley can be seen from the restaurant terrace.

After breakfast the following morning we left with Danash, our guide, on a forest walk. The air was pungent with a blend of spices and the scent of wild flowers. Peppercorn vines were draped across the trees, and beneath their shade grew red coffee berries.

Cardamom is another crop grown under the shade of tall forest trees. To learn more about this spice we pushed our way under the canopy to meet the pickers who were collecting the small green capsules. Beneath the cover of long stalks and oval leaves, a group of ladies with bright head-scarves squatted, each one beside a cardamom plant. They explained how a thick fleshy root comes from the stem; from this stem, shoots emerge as beautiful tiny white flowers, which bear the fruit (capsule). Inside the capsule are numerous seeds with a slightly sweet, floral, spicy, flavour. 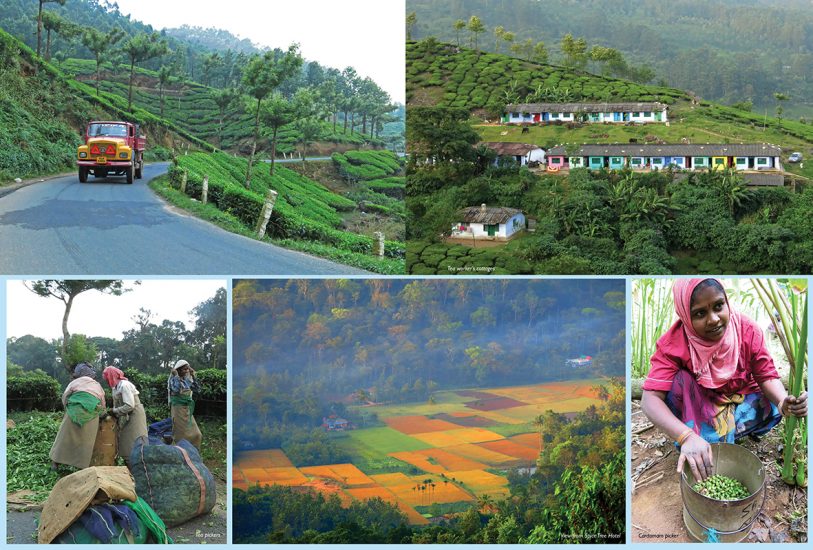 Skillfully each capsule is handpicked then dropped into a tin can painted with the picker’s name, which rests at their feet; it takes an hour to fill. Their work-day begins at 8.30 and ends at 4.00 when they return home to their families. When the crop is harvested, three times a year, they work six days a week. Next time I am in an Indian restaurant and taste the spice or see it in a jar on a supermarket shelf my thoughts will return to the cardamom plantations and remember the effort of those hardworking ladies.

From the tranquillity of the Spice Tree resort we made our way to the port of Kochi (colonial name Cochin) to see the Chinese fishing nets. More than 600 years ago the Arabs, British, Chinese, Dutch, Italians and Portuguese helped Kochi emerge as a bustling centre of commercial activity through the spice trade. Abandoned warehouses with paint peeling from their facades still edge the waterfront.

In the area of Fort Kochi old colonial buildings stand along the narrow paved roads. Here, hawkers sell jewellery, sandalwood boxes and puppets from make-shift stalls. Nearby is St Francis Church known for its beautiful architecture and believed to be one of the oldest churches built by the Europeans in India. The Portuguese explorer, Vasco de Gama was originally buried here after he died in Cochin in 1524, during his third visit to Kerala. After 14 years, his body was taken back to Portugal, but his burial spot is still clearly marked. 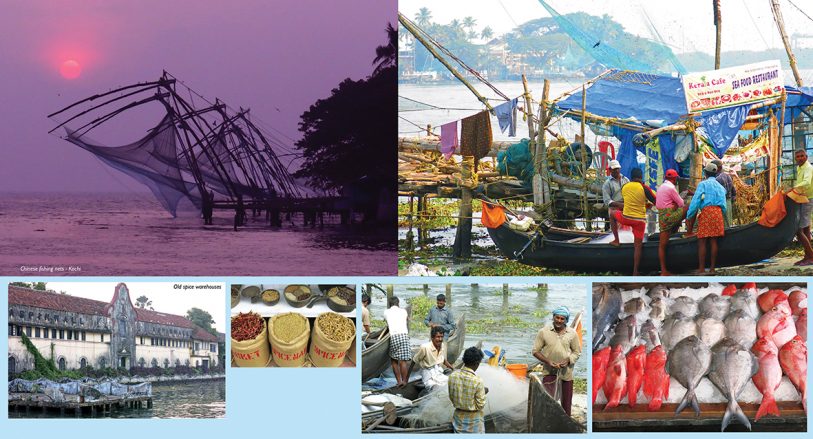 A walk across the square named after the explorer leads on to the beach. It was early morning and some of the local fishermen had been out in their boats and were now gathered in groups freeing fish from their nets. Within minutes the catch was laid on top of beachfront stalls, their scales glistening fresh from the sea, a mix of fish all shapes, sizes and colour alongside boxes of crab and even baby shark. Nearby waterfront cafes will cook your selected fish.

It was our last day and our only chance to see the fabled Chinese fishing nets that are unique to Kochi. It is believed traders from the court of the Chinese ruler Kublai Khan introduced them to India and that it is the only place outside of China that they are to be found. The nets are 10 metres in height and spread out to about 20 metres over the water, then left in for a short time before being raised up as the fishermen tug the attached ropes. The immense scale of the structure dwarfs the team of six men needed to operate each net. It is definitely an unusual method of fishing and certainly contributes to visitors coming to Fort Kochi. I will take away the memory of a string of gauzy blue Chinese fishing nets dotted along the shore resembling the pointy tips of butterfly wings hovering above the sparkling waters of the Indian Ocean.