THIS MONTH TATIANA GIVES INSTRUCTIONS FOR FILLETING AND SCALING A TROUT, HOWEVER, YOU CAN ASK YOUR FISHMONGER TO DO THIS FOR YOU. TROUT SCALES ARE VERY FINE AND ARE OFTEN LEFT ON BEFORE COOKING – REMOVING THEM IS OPTIONAL

HOW TO FILLET YOUR FISH

Step 2: With the help of a pair of kitchen scissors, remove the dorsal and lateral fins, leaving only the tail fin intact.

Step 3: Place your fish on a board and hold firmly without exerting too much pressure. Start scaling your fish by running a paring knife from the tail to the head, at an angle of 30 degrees. Make sure you reach all the little bits like the top of the head and under the chin. Rinse your fish again to remove any loose scales. Pass your hand over the fish to check for any scales that may have been missed.

Step 5: Hold your fish upside down and insert your knife through one gill and out through the other. Pull your knife up, cutting the connection between the gills and the body.

Step 6: Insert two fingers into the belly cavity and pull the guts out (if you see any fish eggs, you might want to save them – they are delicious)

Step 7: Grab the gills and twist until they come away, make sure you get all of the gills.

Step 8: Rinse your fish in gently running, cold water. Now get your paring knife and scrape as much of the black skin inside the belly cavity as you can. Rinse your fish again and place on the board.

Step 1: Hold the fish flat on the cutting board, and while using the filleting knife, pierce the skin behind the front dorsal fin.

Step 2: Slide the knife diagonally across the fish, cutting to, but not through, the backbone.

Step 3: Hold the fish by the head and run the blade down the backbone towards the tail. Do not try to cut too much of the fillet off the backbone at this stage, this will come later.

Step 5: Peel the fillet back with one hand while cutting the fillet away from the backbone using small slicing motions. Don’t try to cut too much away in one stroke. It is better to use many small cuts, guiding the knife along the bony structures and removing all that beautiful flesh.

Step 6: The most difficult task is to remove the fillet from the rib cage area. A very sharp knife is essential here. Using small strokes again just feel your way around the bones, eventually completely removing one side of the flesh.

Step 7: Turn the fish over making sure to hold the fish fairly flat on the cutting surface, and repeat the procedure to remove the other fillet. Some fisherman will keep the first fillet loosely attached to the backbone to improve the “shape” of the fish, making it easier to remove the second fillet.

Step 8: Next comes the removal of the skin. For this particular recipe we will leave the skin on; but if you want to know how to remove the skin, read on. Hold the fish in one hand and using a small knife slice a small portion of the flesh away from the skin.

Step 9: Cut a “finger hole” in the skin. Hold the skin by the finger hole, and using a broad bladed knife; gently remove the skin from the remaining fillet. It is important to hold the knife at the correct angle and to pull the skin. Holding the blade too flat will result in a jagged cutting action and probably leave some skin on, hold it too upright and you will cut through the skin making it difficult to restart the procedure.

For the fish stock

* The head and bones of your fish

* 4 trout, scaled, filleted but with skin on

* A small bunch of parsley, chopped

The first thing to do is your stock so take a pan and place your fish leftovers in there with the leek tops. Cover with boiling water and a pinch of salt and place it over a low heat to simmer for 20 minutes.

Tip #1:For an extra special stock you can add some prawn heads. I always save and

freeze them when I can get them but you might get lucky if you ask your fishmonger nicely.

Once done pass it through a fine sieve and discard the leftovers. Reserve the stock. While your stock is simmering de-shell your cockles by placing them in a pan, just covered with boiling water. Place over a medium heat and keep an eye on them. They will start opening up so wait until most of them have opened, about 5 minutes, before removing. Drain and leave to cool down.Once cooled, discard any that are still closed and remove the rest from their shells, but leave some in for decoration. Now that you’ve done most of the preparation it’s time to get a nice big frying pan and put it over a medium heat. Fry the bacon until crisp, set aside and reserve. Make the leek cream sauce by sweating the leeks in butter and then adding the wine or cider, leaving it to reduce by one third. Add about 50ml of your amazing homemade stock and let that reduce by half.

Tip #2:The trick here is to sweat the leeks nice and slowly over a low heat until they caramelise, then whack the heat up just before adding the wine and watch it steam. Bring it back to a low heat after one minute.

Now add the cream and bring to the boil. Turn down to simmer, add the bacon and cockles, season with salt, pepper and set aside until you need it. It’s time to pan fry your trout. Heat a non-stick frying pan until hot; put a little olive oil in, season the fish on both sides with salt and pepper and place it in the pan skin side down for 2 minutes.

Tip #3:Don’t be tempted to move it until you’re ready to turn it over or it will ruin the lovely skin, and this you want to be crispy.

Turn the fish over and cook for another 2 minutes and then place on a warm plate with the sauce spooned over and a sprinkle of parsley.

Serve with new potatoes and seasonal vegetables or just a piece of bread and a simple salad. 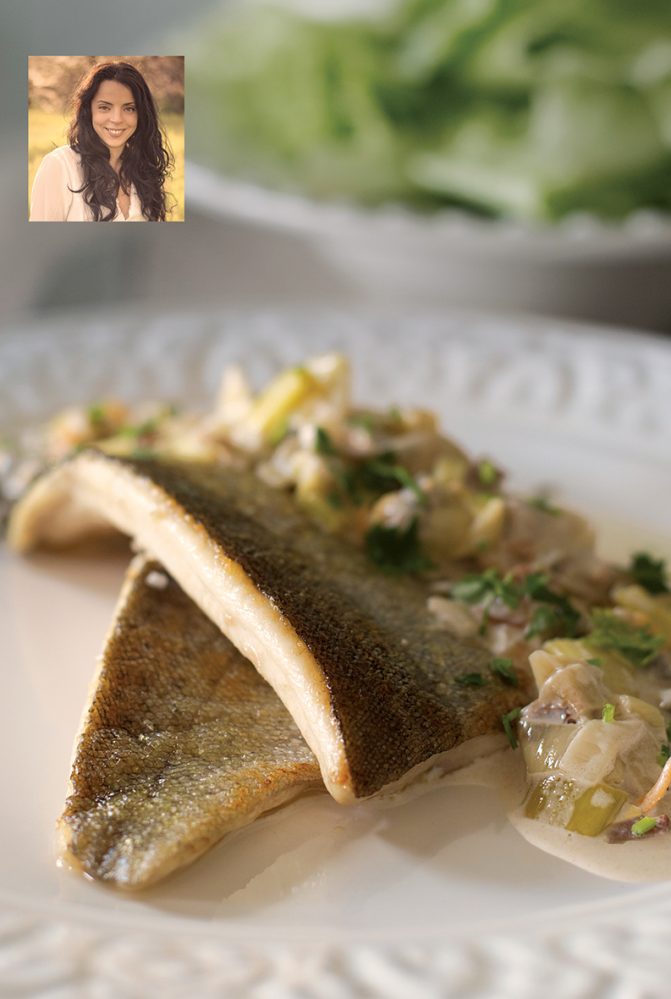