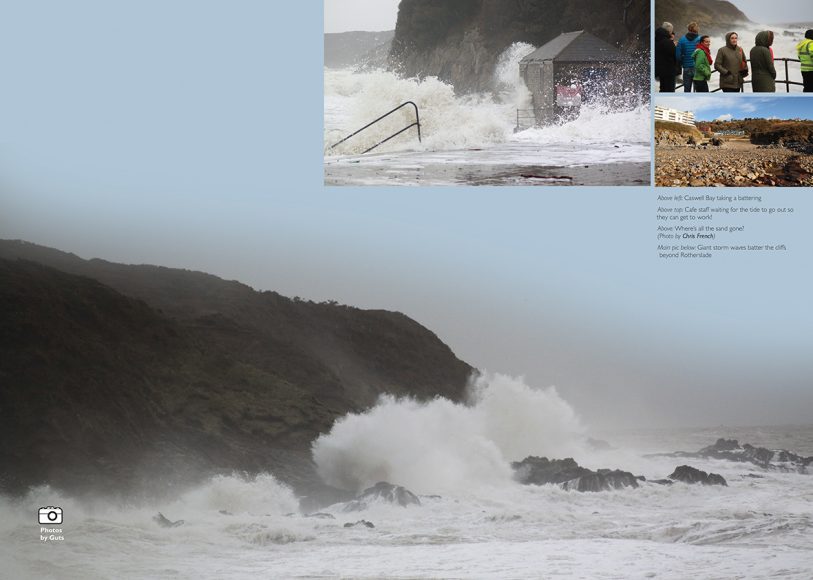 WELL THEY SAY LIGHTNING DOESN’T STRIKE THE SAME PLACE TWICE…….. SO WHAT ABOUT A HUNDRED YEAR STORM – BECAUSE WALES HAS HAD FIVE OF THEM IN THE LAST TWO MONTHS!

It’s all to do with a very strong jet stream that has settled over the south west of the country, creating a conveyor belt effect that has been dragging these massive storms right onto us. They have brought chaos and severe flooding to large areas of coastline, causing millions of pounds worth of damage.

At Langland and Rotherslade, virtually all the sand has been stripped away leaving only bedrock and pebbles extending out almost towards low tide.

The upside to all this carnage has been that we have had the longest run of consistent surf in decades, with waves every day for several months now. It’s been so big on certain days that people have even been spotted surfing in Mumbles – which is a first!

Since writing this, the jet stream has started to weaken which should mean an end to the mega storms and a return to more normal weather patterns. And with the calmer weather the sand will creep back onto the beaches in readiness for the summer!