MADEIRA – it’s a piece of cake

Mountain bike guide, Kim Jones headed for the sun last month on a trip to Madeira where he encountered tunnels, steps and a warm welcome.

This is crazy! The fumes are awful, there are cars overtaking coming towards me and I can hear more cars overtaking behind me. A bus passes by uncomfortably close and I wobble as I pedal along singing a Fleetwood Mac song to myself. I’m in one of Madeira’s many tunnels of which there are 192, and this one goes up hill for over 3km.

Tunnels aside, my overriding impression of Madeira is one of nature and the friendliness of the islanders; the land there is incredibly fertile and green with 20% of the island still covered in laurel forest. The people care for their environment; in fact part of the island is a Unesco World Biosphere Reserve. There’s no litter, no graffiti just an overriding sense of calm. Even in Funchal where over half the population live, there’s no rush and for a capital city, life seems very relaxed. A volcanic landmass measuring 35 miles by 14, the island popped out of the Atlantic some 20 million years ago and was claimed by the Portuguese in 1420, then colonised by them in 1425. However since 1976, with the exception of taxes, foreign policy and a defence budget,

Madeira has been autonomous and the people are proud of this. Although a large exporter of bananas and wine, the islands main income is derived from tourism. It does seem that anyone with a spare bit of land living below 200 metres grows bananas. The climate is temperate, being between 15 and 25 degrees and this allows for year round planting so a constant crop is assured.

Mountain biking seems relatively new to the island, but with a high point of 1862 metres, the possibilities are endless. Detailed maps are available and access doesn’t seem to be an issue. I toured with my bike and whilst I woke with tired legs some mornings and a fuzzy head on others, it’s a great way to see the island. Travelling in land from the coast, the roads go up and up and up, the climbs are huge! But don’t be put off by this, as minibus taxis are numerous and are more than happy to transport you and your bike.

Although I only stayed there for just over a week, two days stood out for me. I’d spent a night in a small hotel where the staff were absolutely brilliant. Despite having turned up covered in scratches and bruises, caked in mud and in what must have appeared as a state of mild delirium, they were most accommodating. The maitre d’ wheeled my bike into the cocktail lounge where it was to spend the night whilst I was put up in a small log cabin. I did provoke a few raised eyebrows when I turned up for dinner as my wardrobe was limited. After some gesticulating, the waiters nodded and laughed and I was welcomed into the dining room. In the morning as I studied my map over a coffee I noticed a levada running west then northwest opposite the café, then descending 1000mt to the coast. A levada is an irrigation channel which carries the island’s abundant water supply. They are popular as walking routes on the island but are also great to cycle alongside as they pass through some incredible scenery and offer some amazing views. 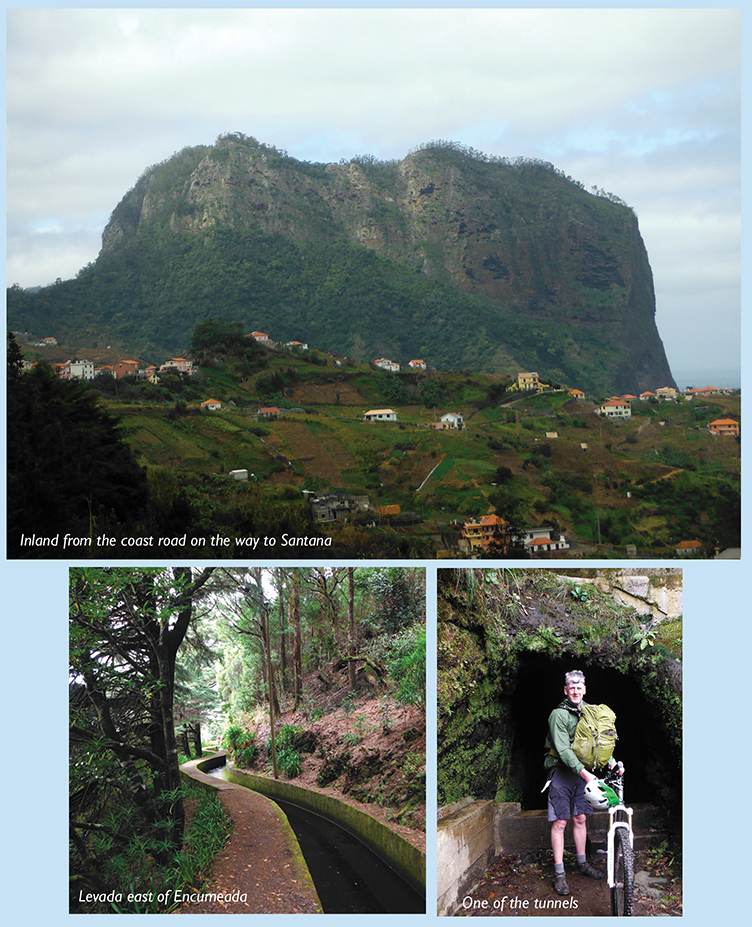 This seemed a much better alternative than a descent on the road, what could possibly go wrong?

The route I had chosen had five tunnels, one of which was over a kilometre long. It was kindly pointed it out to me by a walker who squeezed past me on a narrow path that I was clearly a lot taller than the people who built the tunnel. To walk through the first one I had to wear my rucksack on my front and by bending over, I was able to push the bike along the path, which was narrower than my handlebars in places. There were several instances when the back wheel dropped into the levada, which caused me to over balance, but I managed to stay dry. The riding was good, although a little nerve racking at times due to the steep drops off to the side, but the day passed quickly and I arrived in Sao Vicente a lot later than planned. It was getting dark and the only place I could find to stay was a rather exquisite looking hotel. I walked in and greeted the receptionist with a loud Olah! She looked up and promptly disappeared out of a door, leaving me standing there feeling rather foolish. However she quickly returned with her English-speaking colleague and once again I was given a warm welcome along with a fantastic 4-course meal for 12 euros.

I spent another day travelling along the coast and managed to find accommodation through Madeirarural.com in a small cottage in the hills above Santana. The lady who owned the cottage spoke excellent English and she told me of a walk from Teixeira to Encumeada. This traverses a ridge for about 14km and offers some outstanding views, taking in Pico Ruivo, the highest point on the island. I arranged for an early call and was out on the bike as the sun was coming over the peaks. The path skirted either side of the ridge, and offered views of a virtually untouched wilderness with jagged rocks, sparse vegetation and tropical-like forests. There were places where the sides of the path dropped away steeply into cavernous gorges and it certainly presented some challenging biking. 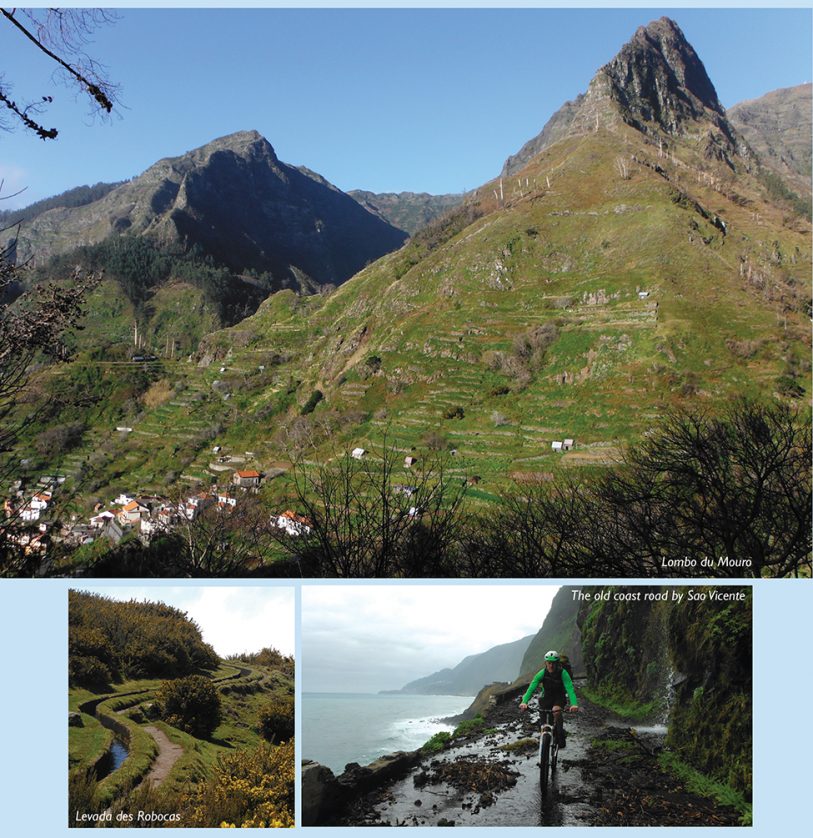 It started off quite well, some good technical riding, a bit of carrying and a few stops to take in the views. I remember thinking this is just fantastic, I should be there by lunchtime. And then the steps started – thousands of them! I’d ride for a bit, then carry or drag my bike up before pushing down. I rather foolishly attempted to ride a series of them, but parted company with the bike half way down and arrived at the bottom before it! Then the weather closed in from the north and on many occasions I was almost blown off my feet as I crossed from the south of the ridge to the northern side. The difference was quite alarming as I’d cross from sunshine to wind, cloud and rain, all in the space of 50 metres. This went on for six long hours and I must have looked like a dying man, as for the last half hour a pair of buzzards had been circling above me waiting for me to drop so they could pick at my flesh. It was a truly epic day out. That evening as I went into the bathroom for a shower, an unshaven weather beaten chap caught my eye in the mirror. I stopped for a chat and went over the day’s events with him; we were to become good friends as the week progressed.

Madeira is a great all year round location. Go there, swim in the Atlantic, relax in the cafes, enjoy the excellent food and share a glass of wine with the people; you won’t be disappointed. Now where next? A farmers market to buy some garlic cloves for a trip in June……! 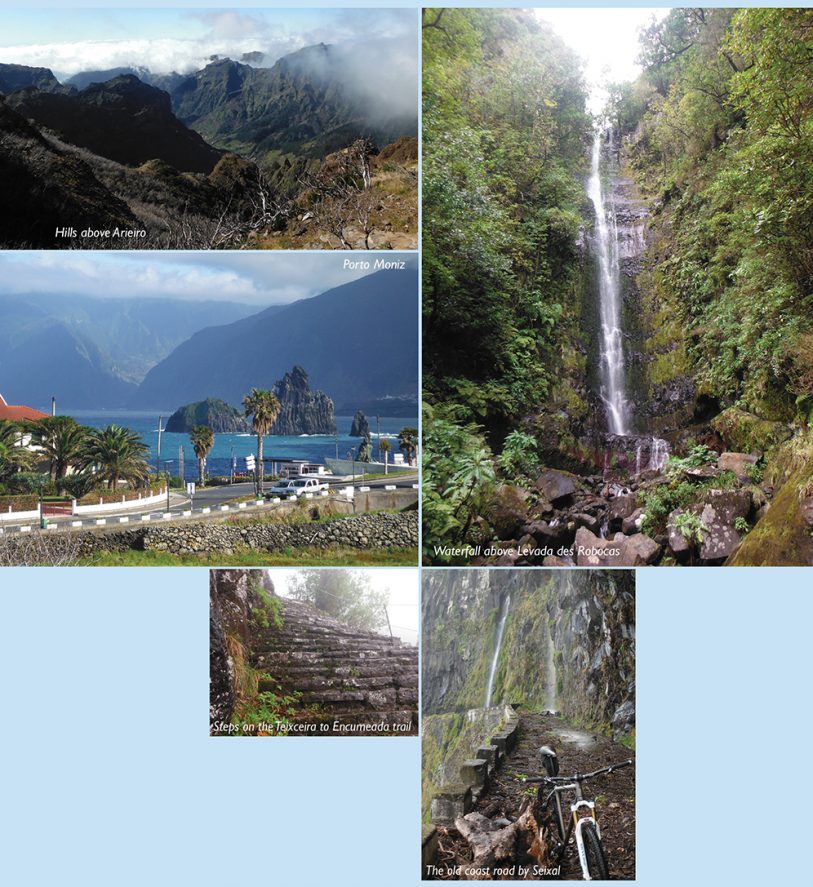