BUT HERE IT IS THE MANUFACTURER OF LIAM BIRD’S TEST DRIVE CAR OF THE MONTH. 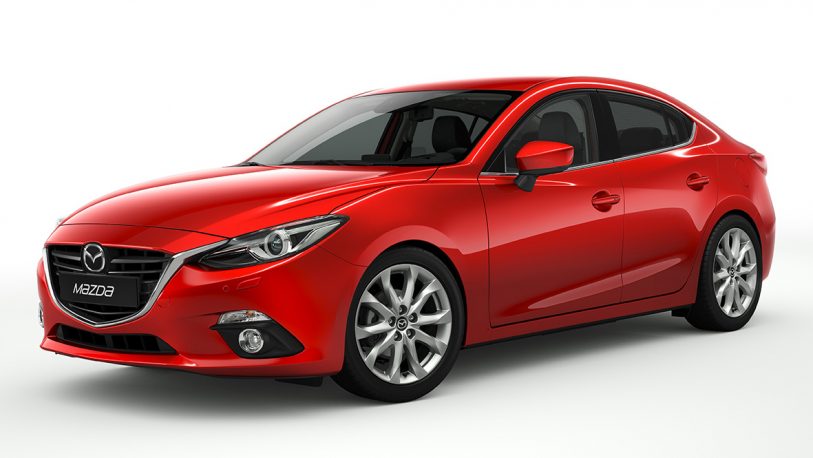 For a car manufacturer, bringing a new hatchback to market must surely be one of the most challenging things you can do. A look through the UK’s top-ten selling cars reveals that there are no less than eight hatches all vying for the top spot. Stretch that count to the top-twenty, and hatchbacks fill all but seven of the top-selling slots. Ford, Vauxhall, VW, Toyota, FIAT, MINI, even Audi; they’re all producing something practical in order to tempt you to part with your hard earned. Then there are the Koreans’ with their ever-increasing levels of quality and their extra long warranties. How long before they make the top-twenty, or even the top-ten?

And let’s not forget that’s just the UK charts. Worldwide, hatchbacks mean big business. Get it right and you’re on to a winner. Get it wrong and your reputation takes a battering that’ll take years to recover from.

The 3 is Mazda’s latest entry in the fiercely fought battle ground that is the hatchback market place. New from the ground up, it’s available as both a four-door fastback, or a slightly more conventional looking five-door hatch (as driven), and from the front at least, both look a little like boil-washed versions of Mazda’s altogether bigger 6 saloon.

That’s not to say that either is unattractive. Mazda’s KODO design philosophy moulds flowing curves and heavily sculpted panels in such a way that the end result is that the 3 is probably one of the most distinctive and perhaps attractive cars, in its class. Although I must admit I do still have reservations about the hatchback version of the 3s rounded, Astra/Megane-esque rear and whether or not it’s the perfect accompaniment for its altogether more angular styled nose. But still,that’s just my opinion. Combined with a roofline that’s 20mm lower than the outgoing model, that rounded rump helps contribute to the 3s 0.275 drag co-efficient, its lowly 107g/km CO2 emissions, and a claimed combined 68.2 mpg. Proof, as if it were needed, that Mazda’s designers know their stuff far better than I ever will.

Those same designers have been busy on the mechanical bits too. The 3 is packed with Mazda’s SkyActiv technology, which together with the 3s slippery shape help cut emissions by ensuring the engine is as clean and as frugal as possible whilst virtually eliminating the need to have to resort to such things as supplementary electrics or heavy and complicated hybrid drive. Also, the SkyActiv all-steel monocoque platform on which the 3 is based is made up of 60% high strength or ultra high strength steel and is said to give a 30% increase in overall torsional rigidity.

What that means is the 3, like most Mazdas in fact, is actually rather pleasing to drive. The seats are a little flat, and there’s a little more tyre noise than you might be expecting – the 18” rims and shallow side walled tyres – they’re standard fit on the Sport spec cars, may be the main contributing factor – but overall the 3’s handling is precise, well balanced and above all predictable. Both the steering and the gear-change are light and accurate, and with the 2.2 litre, 148bhp, sequentially turbo-charged diesel engine provides plenty of mid-range oomph. On a twisty road the 3 is more than capable of putting a smile on your face that even its sometimes slightly fidgety ride can’t erase. In fact I’d go as far as saying it makes some certain so-called benchmarks in this class seem rather numb by comparison.

It’s a shame then that Mazda have blessed their new baby with such a dull interior. If only they’d given it a bit more sparkle. At best it can be described as well appointed – Bluetooth, dual-zone aircon, heated seats, touch-screen sat-nav etc. etc. – plus it’s intuitive and functional in its layout.  But there’s nothing, not even the red stitched steering wheel or even the head–up display, to really make it memorable. Overall, despite the (optional) 9-speaker Bose stereo and centrally mounted rev-counter complete with digital speedo, this is not an environment that will set your pulse racing. Neither, sadly, does the 3s cabin feel as classy or indeed as plush as those of some of its competition.

Nevertheless the Mazda 3 has an ace up its sleeve that even the more established of its contemporaries can’t match. The latest data from vehicle valuation gurus CAP Automotive suggests that the all-new SkyActiv Mazda 3 range tops the tables and beats numerous lower medium sector rivals when it comes to forecasted pound note depreciation. And that includes the Ford Focus, the Peugeot 308, and the Renault Megane, as well as Vauxhall’s Astra, Toyota’s Auris and the benchmark of the class: The VW Golf.

With their new 3, Mazda have more than met the challenge set by the hatchback standards, so much so that perhaps it’s time that those standards raised their game too.

Many thanks to Martine at Mazda’s UK press office for the loan of the 3. www.liam-bird.com@bird_liam