THE WINDOW TO TWO CONTINENTS

Liz recently took a short break to Turkey’s largest city, Istanbul, which lies at the confluence of the Sea of Marmara, the Bosphorus, and the Golden Horn

Constantinople was the capital of the Ottoman Empire for nearly 500 years; today we know the city as Istanbul. The city sits on the banks of the Bosphorus where east meets west – it is the only city to occupy two continents Asia and Europe.

Geographically the historic centre of Istanbul is separated from the rest of the city by the Golden Horn, a natural harbour spanned by the Galata Bridge. This is a great place to mingle with the locals and talk to the fishermen who stand shoulder to shoulder, rods and lines in the water along the top level, whilst on the level below there are numerous fish restaurants where you can sample the local catch. 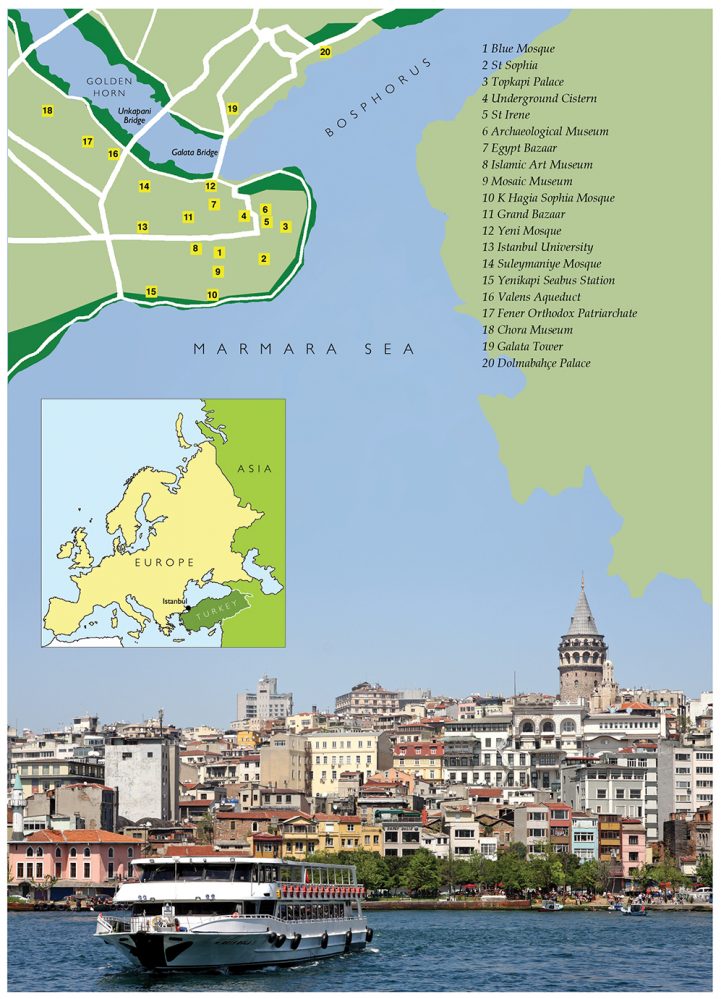 Close by in the Eminonu quarter of the Faith district is the Spice Market also known as the Egyptian Bazaar because centuries ago it was the marketplace where goods such as medicinal herbs and aromatic incenses brought from Egypt were traded.

Beneath the great vaulted ceiling of this bustling covered market your senses are switched into overdrive with the aroma of pungent spices displayed in exotic coloured mounds. Here you will find stalls selling fruit leather (sheets of thickened fruit paste), sun-dried apricots, fresh nuts, sticky Baklava pastries soaked in syrup and honey and stuffed with pistachios or almonds, flavoured teas such as apple and delicious rosewater fragrant Turkish delight. Fortunately there are plenty of samples to taste — don’t forget to haggle before you buy. 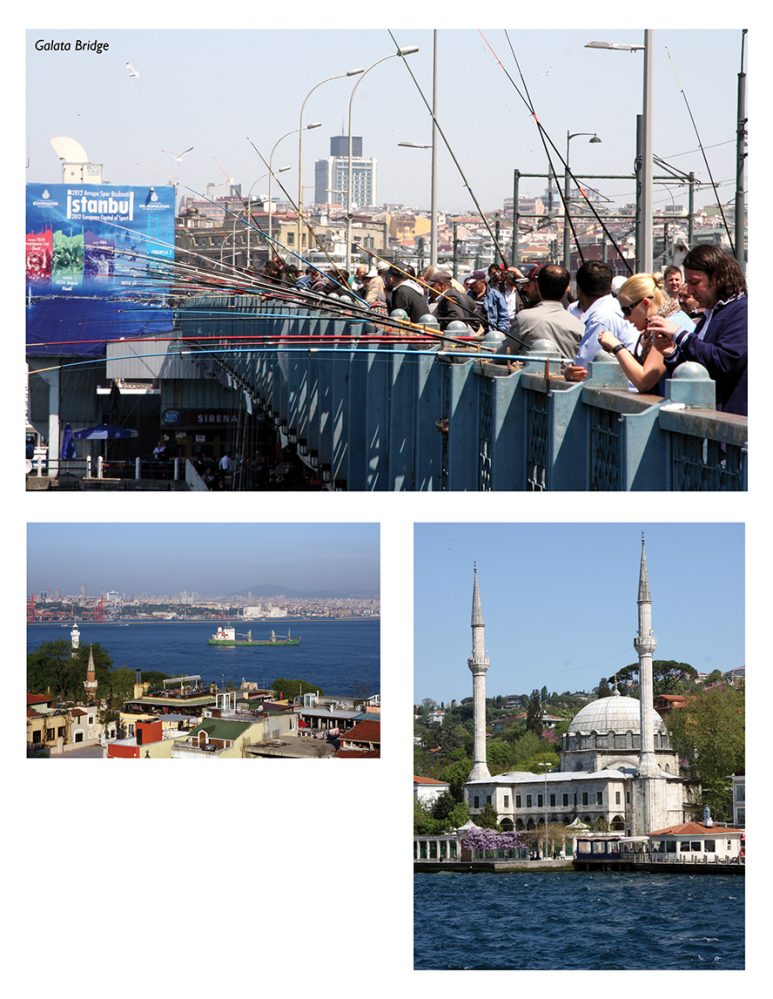 For souvenir shopping a maze of over 5,000 shops and stalls can be found in the Grand Bazaar, one of the world’s oldest covered markets. Glass lanterns hang from the ceiling, the sun’s rays casting mosaics of light across the narrow halls. Small groups of men sit chatting, sipping on small glasses of Turkish coffee beside piles of intricately patterned rugs, ready to draw you inside their shop and make a sale. Dazzling displays of woven cushions and textiles, elegant slippers and hand painted ceramics are just some of the wares to be bought. Venturing further into the warren of narrow streets that border the bazaar you can gaze at the gleaming chains and sparkling bangles strung across the windows of the gold and silver jewellery shops. 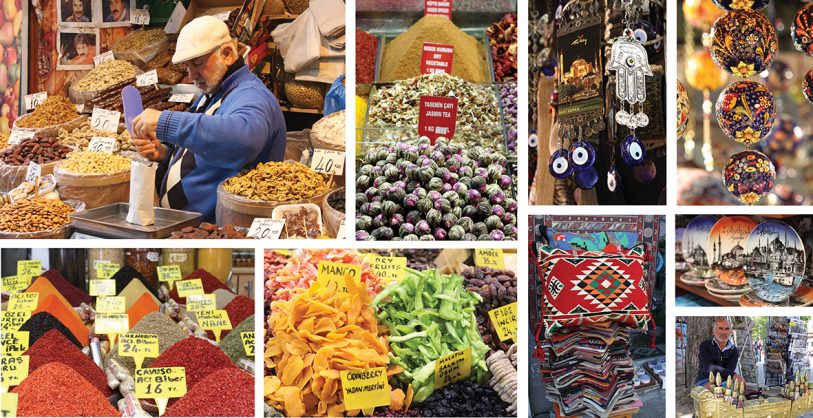 Sultanahmet is an area of old Istanbul where most sightseers head to visit Hagia Sophia (also known as Aya Sofya), the Blue Mosque and the Topkapi Palace.

Hagia Sophia was inaugurated as a Byzantine church in AD537. In 1453 it became an Ottoman Mosque and in 1935 a secular museum. The vast dome of the Aya Sofya museum with its elevated ceiling, gives the impression of being suspended in mid-air. 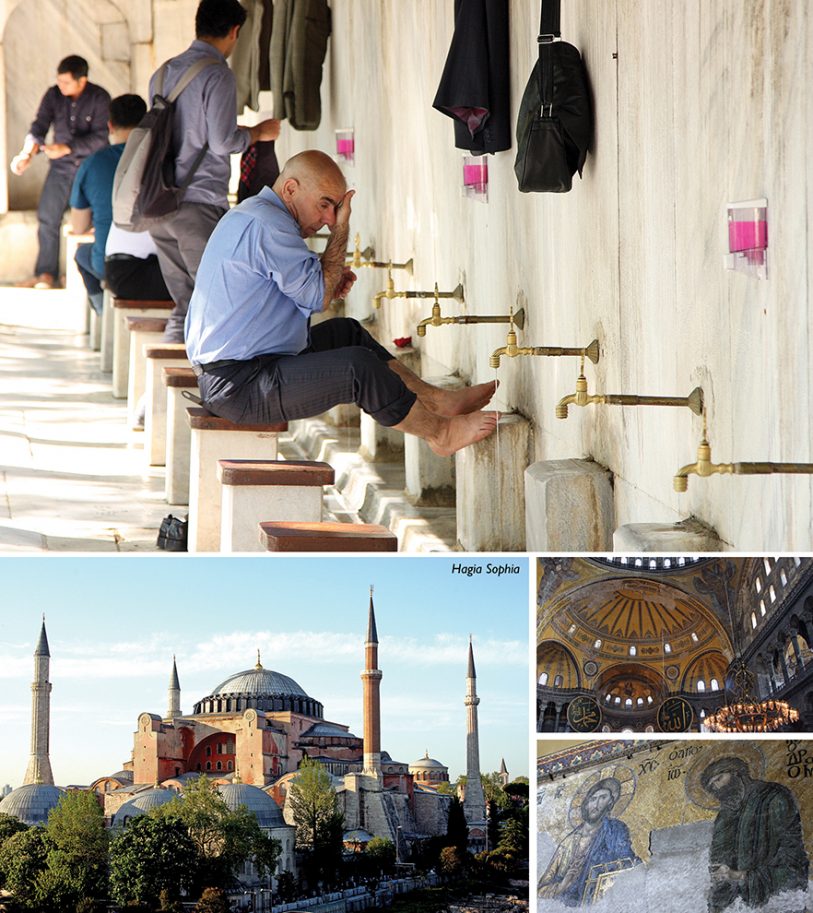 Traditional Turkish architecture can be seen at the nearby Blue Mosque, so called because of Blue Iznik tiles which adorn the interior. Originally it was the only mosque built with six minarets. Spiral stairs lead to the balconies from where five times a day Muslims are called to prayer. 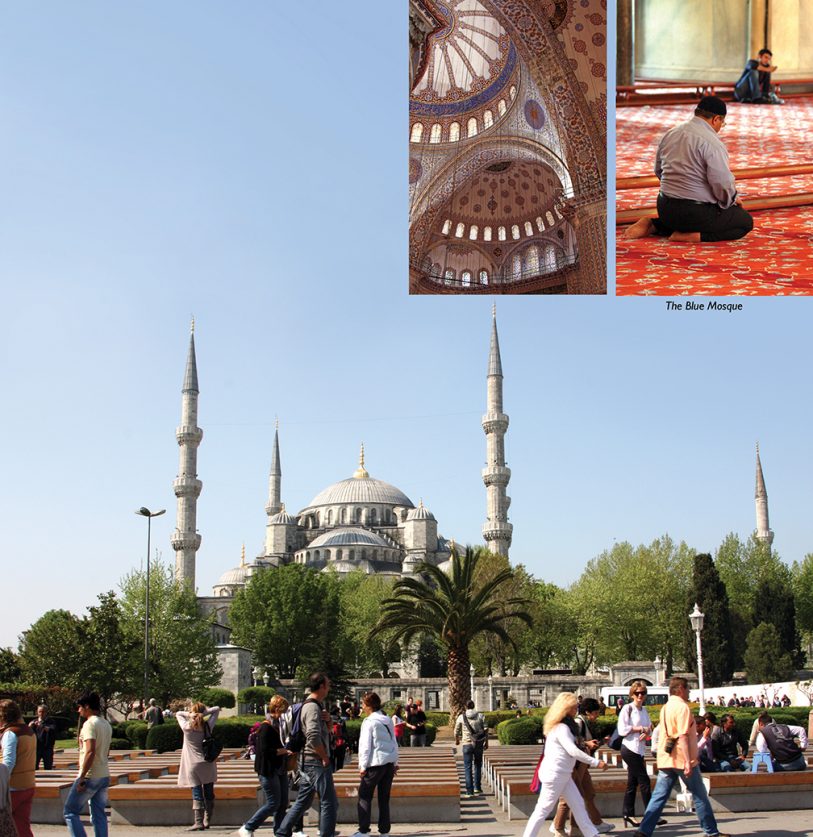 Topkapi Palace was turned into a museum in1924 and is situated on the site of the first settlement in Istanbul; the elevation delivers an impressive view of the Golden Horn, the Bosphorus and the Sea of Marmara. For almost 400 years (1465-1856) of their 624-year reign this was the main home of the Ottoman Sultans. It contains important holy relics of the Muslim world, great rooms, many courtyards and a treasury with gold and gems to be admired, and a harem to be explored.

A fantastic view of the Istanbul skyline can also be seen from the deck of a ferry. The two hour ride from Eminonu quay to the Bosphorus Bridge and back provides an ideal opportunity to admire the beautiful houses and ornate palaces that line the river banks. Also look skywards up to the 67m Galata Tower which dominates the horizon and offers an alternative perspective of the city from the 360 degree viewing gallery. 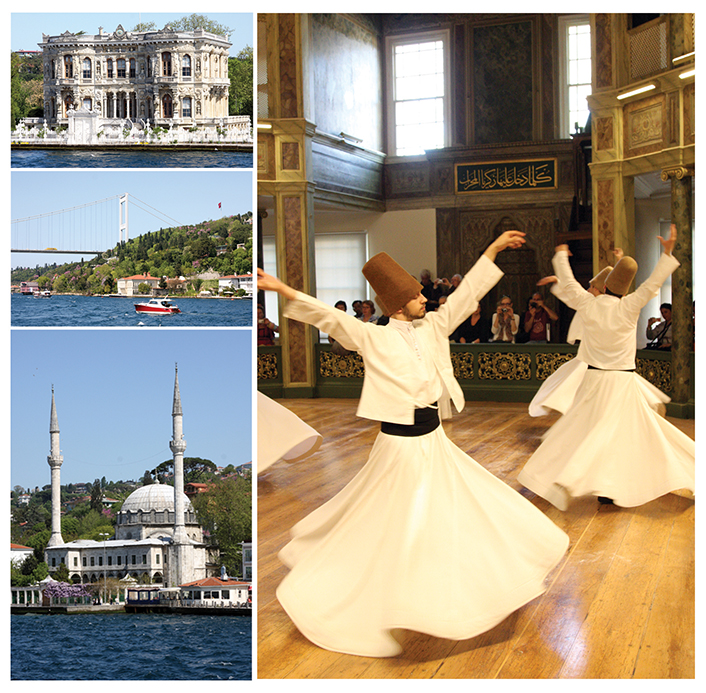 At the Galata Dervishes House Museum you can watch the ancient Sufi ritual. The participants’ right hand points to heaven the left to earth, the music quickens and their spinning increases, their flowing white skirts billow outwards and the Whirling Dervishes enter a trance-induced state to perform the Sema, a religious ceremony.

And finally you can’t leave Istanbul without a visit to a Hammam. Here you can experience being pummelled by a muscular local, before emerging from a cloud of steam having had your sightseeing-weary limbs oiled and massaged.