DOCTOR AT LARGE IN TANZANIA 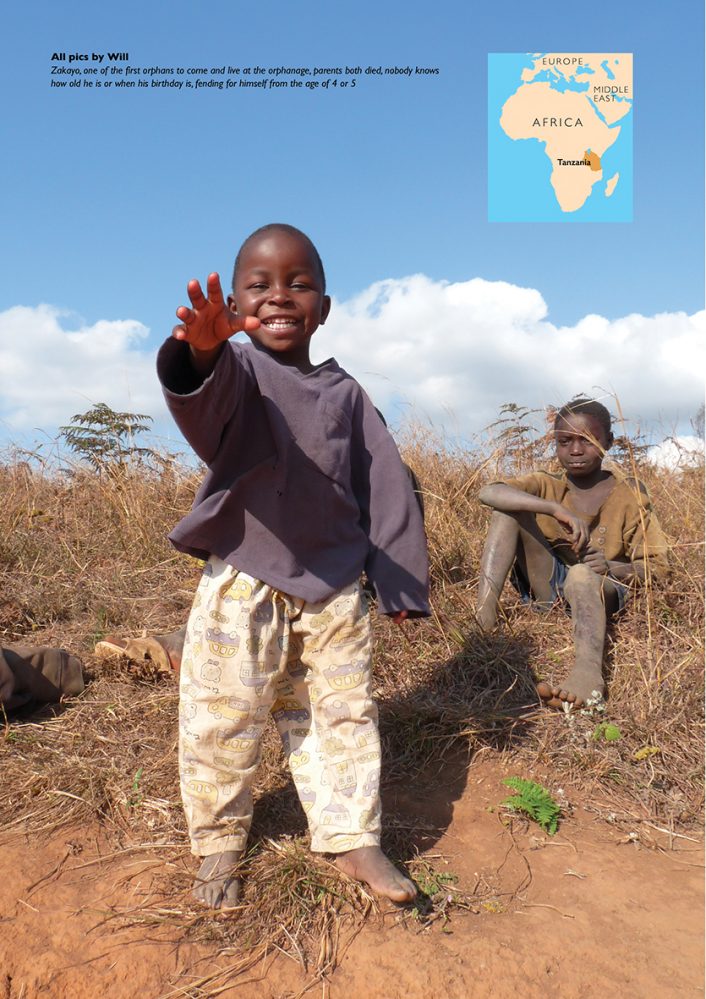 WILL METCALFE is the kind of guy that you’d want by your side if you were heading off on an adventure. He’s a doctor who initially trained as a pharmacist and who is now a trainee GP. In his spare time he farms pigs and drives lifeboats.

Will has spent his free time in the past few years in Tanzania, Africa working with children with HIV and the charity Wild Orphans. Here Will tells us a bit about the charity and its work and in future issues he will update us on his progress out there.

I promised this article to TheBAY magazine many months ago, but whilst sitting down to reflect on the highs and lows I have experienced in Africa over the past few years I found myself drawn instead to the flight comparison websites.

I managed to wrangle 3 months off work and disappeared back out to the African Rift Valley.

I am now sitting down to write this several months late, with a fading tan, from an on-call room looking out over a rainy Swansea Bay and this time I’ve left my credit card at home!

It was 6:30 in the morning and together with a friend I’d just crawled off an overnight flight from Heathrow to Dar Es Salaam, Tanzania’s largest city. We were greeted with muggy heat and calls of “taxi” “taxi” “best price”. Fortunately I’d been through all this before; little seems to change in Tanzania. The traffic in Dar is notoriously bad, even at that time of the morning. We eventually traversed the town to the city’s bus station, Ubongo, arriving 15 minutes after our bus was scheduled to have left.

Ignoring all the guidebook warnings of pickpockets and scam artists that operate in and around this chaotic traffic hub, we raced to the bus stand dragging our bags behind us. We found, with relief that the bus was still there, threw our bags underneath and climbed into the front seat which had lost its actual “seat” long ago. We’d made it! We then proceeded to sit there for another 2 hours waiting for the bus to leave. Welcome to Swahili time.

Our destination was Iringa town, 500km to the south west of Dar Es Salaam. The bus ride from Dar to Iringa can take anywhere between 10 hours and 3 days, depending on road conditions and how long the recycled tyres hold out. The Tanzam highway passes though Mikumi National Park where you can spot 4 of the “big 5” (buffalo, elephant, lion & leopard) without leaving the main road. From there you climb into spectacular, boulder strewn mountain scenery up to 2000m above sea level.  The roadside is littered with the mangled remains of crashed buses, cars and lorries, but discounting the small “bump” we had whilst negotiating our way out of the bus stand and the Tanzanian toddler I was handed to entertain whilst his mother slept, the journey was pretty uneventful. We arrived in Iringa 12 hours later.

After spending the night in Iringa the final leg of the journey commenced, a 3 hour drive on dirt tracks into the true wilderness of Mufindi. No mains electricity or running water, no hospital (yet), just 35,000 people across 19 villages, equatorial cloud forest, tea plantations and lots and lots of AIDS.

People in this part of Africa are sicker when they seek help than most of those that we see in the UK. A combination of lack of education, lack of access to health care and the HIV virus ravaging their immune systems means that you see problems at a far more advanced stage than you normally would at home. Diagnostic tests are few and far between in this part of the world.

Fortunately it’s not all doom and gloom, things can, and are being done to address these problems.

We’d come to work as doctors, we were staying at the home of two close friends, Jenny and Geoff who have chosen to forego a Western life and live in Mufindi, managing a charity that was set up by a British family who have spent many years living in Tanzania. Foxes’ Community and Wildlife Trust is dedicated to helping the local population by improving education, healthcare, community and the environment. This was my 5th visit to the area over a period of 10 years and they have made a significant difference during that time.

At the core of the charity is a children’s village, 6 houses each housing up to 12 orphaned children with a local guardian who takes on parental responsibility for the children in his or her care. They have also built a community centre where people can gather for talks and education, a treatment centre which offers HIV testing, treatment and monthly check-ups free of charge and a kindergarten which provides a safe, supervised place for working parents to leave their children during the day. Their most ambitious project yet is approaching completion – a hospital – the first in the area, which will provide in-patient beds, operating and x-ray facilities and up graded maternity services.

During our stay we would be visiting remote communities, miles from roads, with no access to health care, helping to look after the children in the orphanage and taking turns staffing clinics in the recently built care and treatment centre. In order to treat anything in Africa you need to learn to be a master of improvisation, generally you can find something that can be adapted to do the job, even if it’s not what you would have chosen. And if in doubt, Baroness Blixen’s old adage still generally holds true:

“The cure for anything is salt water — sweat, tears, or the salt sea.”

Sweat and tears have been expended on this project by the bucket load, but unfortunately sometimes they just aren’t quite enough and sea water is a pretty rare commodity in Mufindi. One of our first patients on this visit was a 13 year old boy who had recently come to live at the orphanage. His name was Nache and he was the size of an average 7 year old. Both of his parents had recently died from AIDS and he was very unwell. Nache had been tested for HIV prior to coming to live at the orphanage and was positive. He was a boy who I thought needed the services of the nearest Government Hospital – a 3.5 hour drive away and inaccessible to most.

We drove Nache to the hospital; he had blood tests which showed that the HIV virus which he was infected with was resistant to his medication, so despite taking it every day his immune system was becoming weaker and weaker. He had an x-ray of his chest showing that he had a life-threatening pneumonia and was also suffering from malnutrition. Nache was refused admission to the hospital.

We can’t blame the local doctors who have an incredibly tough job and have to make difficult decisions, rationing the limited resources that are available to them. One of the doctors took me aside and tried to explain that “you have to choose your battles, you can’t fight every one and you have to accept that you’re going to lose some”. This is an entirely alien concept to a UK doctor, particularly when this battle was for a 13 year old boy’s life. At home there is no giving up.

We purchased antibiotics, fluids and equipment from the hospital and took Nache home. We treated him with intravenous antibiotics 3 times a day, he was given his own “nurse” from the orphanage staff who encouraged him to eat small regular meals and provided him with love and support and we arranged with the regional medical officer for a regular monthly supply of second (and final) -line antiretroviral medication which, over a period of months, should start to repair Nache’s immune system, if we could only buy him the time for them to work…

In Mufindi you never know who’s going to come calling, it is quite normal to get up for breakfast to see a row of heads sitting in the porch waiting patiently for some help or advice. You need to be a jack of all trades, whether it be sewing up kids who’ve fallen off their bikes, setting fractured bones or rescuing cows that have fallen down the long drop. Patients haven’t even been restricted to the human variety, but thanks to TheBAY’s resident vet Geraint Jones, I can now confidently turn my hand to castrating monkeys and diagnosing balding chickens.

One of the biggest changes that has occurred in Mufindi in the years since I started visiting is the openness of its inhabitants. Ten years ago AIDS was such a taboo subject, nobody would talk about it, and people who were sick wouldn’t go to the doctor for fear of being told that they might have it. Through their integration into the community Geoff and Jenny have formed strong relationships with village leaders, they have given talks and they have befriended brave people who are HIV positive and are prepared to speak out and educate their neighbours. As a result of this, HIV is now out in the open in Mufindi, there is nobody who isn’t aware of it, of how to prevent its transmission and how to access testing and treatment. I think this is going to prove to be their major weapon in a fight against a disease which is devastating their community.

The people of Mufindi are warm, generous and welcoming. They always try to repay any help given to them, whether it be with a chicken, a bunch of bananas or a bag of beans – all things which they can scarce afford to part with. Working there is very different to working in the NHS, it can be incredibly tough but the people make it a pleasure. I’m sure it won’t be too long before I’m back there again. I’ll be certain to check in on Nache who is getting stronger day by day. If only working there would pay the mortgage.

Money is always needed to fund new projects and to support the on-going costs of those that already exist. Staff, supplies, school uniforms and food for over 70 hungry orphans doesn’t come cheap. More information on the project and ways to donate can be found at www.wildorphans.org 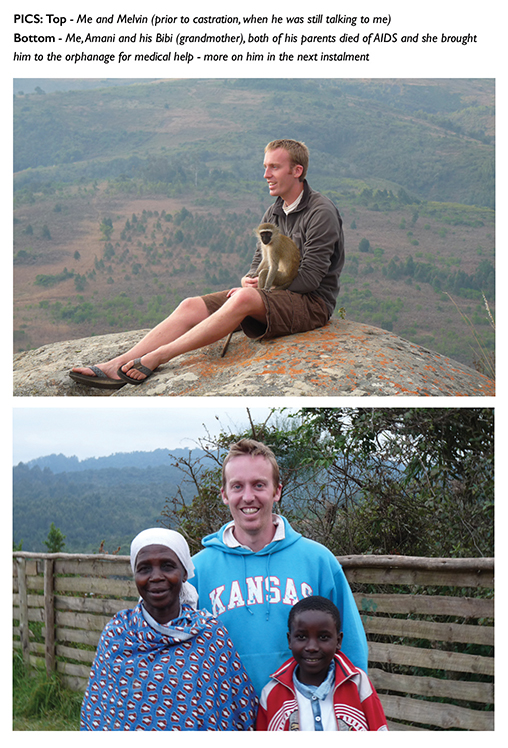 Tanzania is the 13th poorest country in the world

Only 2% of rural households are connected to mains electricity

Over the last 25 years life expectancy in Tanzania has dropped from 50 to only 43 years – just over half of that in the UK.

A study has shown that as many as 1 in 3 people in Mufindi could be infected with HIV.