This month, we conclude a three-part series on CS Lewis and his reflections on the problem of suffering with his most personal work… 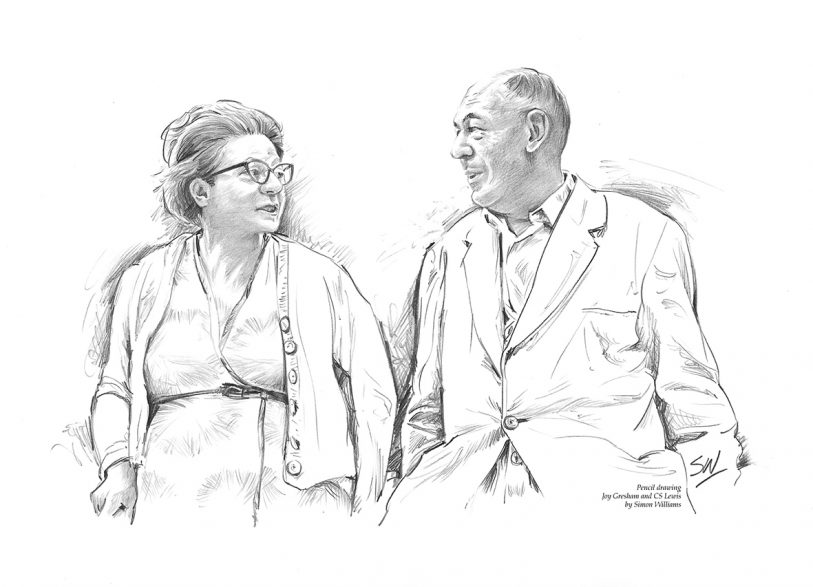 As I mentioned last month, Lewis wrote the following in The Problem of Pain:

‘You would like to know how I behave when I am experiencing pain, not writing books about it. You need not guess for I will tell you; I am a great coward.’

This analysis would be put to the test twenty years later following his meeting with and subsequent marriage to Joy Gresham.

Lewis’ relationship with Joy Gresham was decidedly unorthodox, at least by the standards of Oxford in the Fifties: but she was clearly a remarkable woman. Born Helen Joy Davidman, she was an American, a poet and writer, and an enthusiastic aficionado of Lewis’ works. Raised within a secular Jewish household, and in early adulthood a member of the Communist Party, Joy later converted to Christianity. At the time of her first encounter with Lewis, she was already estranged from her abusive husband, Bill Gresham, the father of her two sons, David and Douglas.

Having corresponded over the course of two years with Lewis, Joy finally came over to Britain and met him in August 1952. A feisty, independent woman, with strong and forthright views, she immediately made a strong impression upon Lewis. Joy remained in Britain with her sons, and her marriage with Bill finally broke down irretrievably after he confessed to infidelity with her cousin. They were divorced in August 1954.

Lewis valued Joy’s opinions on his writings, and she commented upon and influenced several of his later works, including Till We Have Faces, Reflections on the Psalms and The Four Loves. Joy, in turn, benefited from Lewis’ support (not least his writing the preface to her best-known work, Smoke on the Mountain: An Interpretation of the Ten Commandments). Their relationship was originally platonic: as Lewis’ brother Warnie wrote,‘For Jack the attraction was at first undoubtedly intellectual. Joy was the only woman whom he had met who had a brain that matched his own in suppleness, in width of interest, and in analytical grasp, and above all in humour and a sense of fun.’

However, their relationship changed suddenly following the failure of Joy’s attempt to renew her visitor’s visa.

Faced with the prospect of deportation for herself and her two young sons, Joy persuaded Lewis to enter into a civil marriage contract, so that they could continue to live in Britain. They were married in April 1956, and Lewis told a friend that he considered the ceremony as nothing more than ‘a pure matter of friend-ship and expediency.’

Afterwards, they continued to live separate lives, but six months later, Joy broke her leg in a fall, and was diagnosed with incurable bone cancer. As Joy’s health deteriorated, Lewis suddenly realised just how much he loved her: and faced with the prospect of losing her, he recognised that their civil marriage of convenience was a dishonest sham. He now sought to make amends by contracting a Christian marriage: but the Church in England’s hard-line position at that time against the marriage of divorcees posed a difficulty. Eventually, Lewis prevailed upon a friend, the Revd Peter Bide, to marry them in March 1957: Joy was now so gravely ill that the ceremony had to be per-formed from her hospital bed.

Members of Lewis’ social circle were surprised by the marriage, and many of them were disapproving: but this did not trouble Lewis, not least because immediately following their bedside marriage, Joy entered an unexpected period of remission. She returned to Lewis’ Oxford home, and they lived together happily for three years before the cancer returned in March 1960. Joy died a few months later, in July of that year.

Lewis wrote the following words to describe his relationship with Joy:

‘She was my daughter and my mother, my pupil and my teacher, my subject and my sovereign; and always, holding all these in solution, my trusty comrade, friend, shipmate, fellow-soldier. My mistress; but at the same time all that any man friend (and I have good ones) has ever been to me. Perhaps more.’

And in the immediate aftermath of her death, he was inconsolable.

In 1961, a manuscript entitled A Grief Observed by NW Clerk arrived at the offices of Faber & Faber. One of the directors of the publishing house at that time was TS Eliot, who found the work intensely moving. For all that, this slim volume by an unknown author seemed certain to make only a modest return, until one of Lewis’ friends happened to pick up a copy, and immediately recognised from both subject and style its true authorship. Republished shortly after Lewis’ death in 1963, the book was quickly recognised as a powerful and intimate portrayal of the experience of bereavement.

Douglas Gresham (Joy’s younger son, and Lewis’ stepson), has pointed out the significance of the book’s title, A Grief Observed i.e. that the use of the indefinite article shows that Lewis was conscious that his reflections could not constitute a quint-essential meditation on everyone’s experience of grief, but only one person’s perspective amongst many others. Nevertheless, Lewis’ perceptiveness and insight has been a great help to many others (not necessarily Christian) who have been able to identify with his experience.

Let me stop talk-ing for a moment about A Grief Observed – listen now to Lewis’ own voice, with some direct quota-ations from the work:

‘The act of living is different all through. Her absence is like the sky, spread over everything.’

‘No one ever told me that grief felt so like fear. I am not afraid, but the sensation is like being afraid.  The same fluttering in the stomach, the same restlessness, yawning. I keep on swallowing. At other times it feels like being mildly drunk, or concussed. There is a sort of invisible blanket between the world and me. I find it hard to take in what anyone says.’

‘It’s not true that I’m always thinking of H [Lewis’ pseudonym in the work for Joy, the initial of her first name, Helen, which she rarely used]: work and conversation make that impossible. But the times when I’m not are perhaps my worst. For then, though I have for-gotten the reason, there is spread over everything a vague sense of wrongness, of something amiss…I see the rowan berries redden-ing and I don’t know for a moment why they, of all things, should be depress-ing. I hear a clock strike and some quality it always had before has gone out of the sound.  What’s wrong with the world to make it so flat, shabby, wornout looking?  Then I remember.’

I see people, as they approach me, trying to make up their minds whether they’ll “say something about it” or not. I hate if they do, and if they don’t.’

Lewis is candid in his wrestling with spiritual doubt, and asks plenty of fundamental questions of faith. Not surprisingly, some of his admirers found the work troubling, and were disinclined to believed that such a mighty defender of and apologist for Christian truth should have come so close to despair. But it is this very candour that most impresses me. These words come from a voice speak-ing from authentic experience:

‘Not that I am (I think) in much danger of ceasing to believe in God. The real danger is of coming to believe such dreadful things about Him. The conclusion I dread is not “So there’s no God after all,” but “So this is what God’s really like. Deceive yourself no longer.”’

‘When you are happy, so happy you have no sense of needing Him, so happy that you are tempted to feel His claims upon you as an interruption, if you remember yourself and turn to Him with gratitude and praise, you will be – or so it feels – welcomed with open arms. But go to Him when your need is desperate, when all other help is vain, and what do you find? A door slammed in your face, and a sound of bolting and double bolting on the inside. After that, silence.’

‘Talk to me about the truth of religion and I’ll listen gladly. Talk to me about the duty of religion and I’ll listen submissively. But don’t come talking to me about the consolations of religion or I shall suspect that you don’t understand. Unless, of course, you can literally believe all that stuff about family reunions “on the further shore,” pictured in entirely earthly terms. But that is all unscriptural…and it rings false. We know it couldn’t be like that. Reality never repeats. The exact same thing is never taken away and given back. How well the Spiritualists bait their hook! “Things on this side are not so different after all.” There are cigars in Heaven. For that is what we should all like. The happy past restored.’

There is honesty in these words, which exposes much of what we say to comfort one another in the midst of bereavement for what it is: superficial cant. Yet, ultimately, through the grief, Lewis finds himself stumbling back to a reliance on Christian truths that have sustained him in the past, and which, somehow, he knows will sustain him still.

‘Am I, for instance, just sidling back to God be-cause I know that if there’s any road to H, it runs through Him? But then of course I know perfectly well that He can’t be used as a road. If you’re approaching Him nor as the goal but as a road, not as an end but as a means, you’re not really approaching Him at all.’

‘Can a mortal ask quest-ions which God finds unanswerable? Quite easily, I should think. All nonsense questions are unanswerable. How many hours are in a mile? Is yellow square or round? Probably half the questions we ask – half our great theological and metaphysical problems – are like that.’

Lewis is conscious that his notes ‘Have been about myself, and about H, and about God. In that order.’

He regrets that his prior-ities seem so skewed. Yet by the end of A Grief Observed, one feels that he is on his way to restoring the balance:

‘How wicked it would be, if we could, to call the dead back! She said not to me but to the chaplain, ‘I am at peace with God.’

There seems little doubt that Lewis ultimately found that same peace for himself when he passed away three years later, on November 22nd 1963, leaving a wonderful legacy in his rich and diverse body of write-ings. A Grief Observed, if not the most well known of his works, is perhaps one of the very best. Do read it.