All photos by Kim

KIM JONES – TheBAY’S MOUNTAINBIKE GUIDE – IS A WELL-SEASONED TRAVELLER, BUT EVEN HE WASN’T PREPARED FOR THE RECEPTION HE RECEIVED IN ROMANIA WHEN HE VISITED EARLIER THIS YEAR – AND IT WASN’T THE BEARS THAT WERE GRISLY 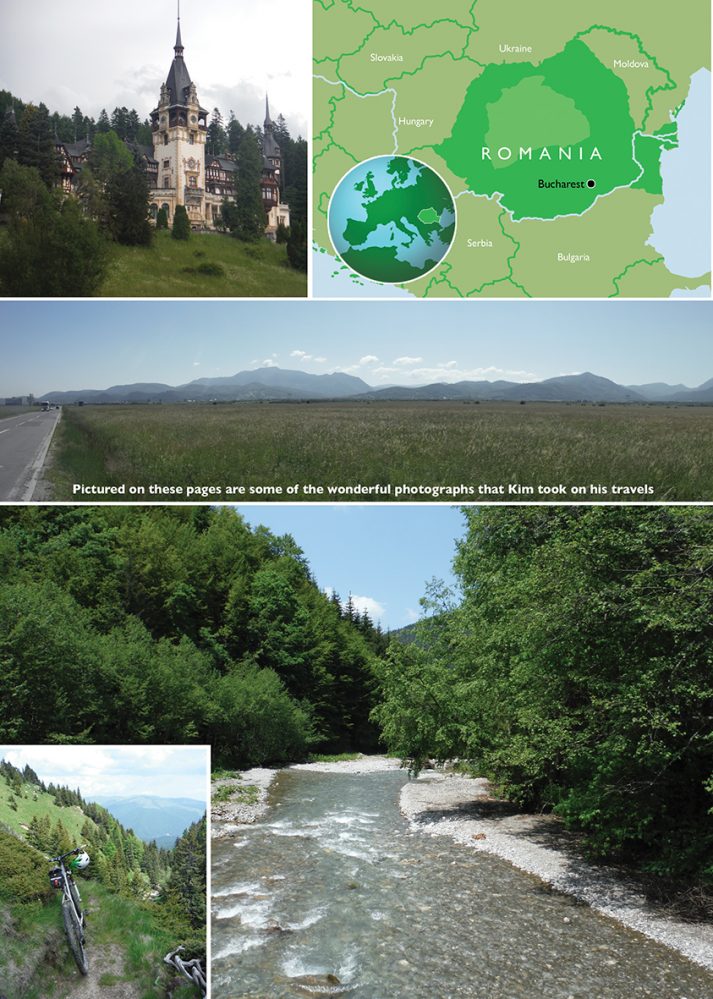 Give me your passport

I’d only been on the bus for a short time and had my head down, poring over the map, lost in my thoughts of the week ahead when I was approached by the conductor. ‘Give me your passport’. Sorry? ‘Your passport, give me your passport’. No. ‘Then I will call the police’. What?!  After my refusal to hand over my passport, the situation deteriorated rapidly; the bus pulled in at the next scheduled stop and everybody was asked to leave, which to my amazement they did without question. When I tried to get off I was told to sit down by a gentleman who must have just boarded; he then stood in the doorway and the bus pulled off before stopping again. I immediately tried to make my escape via the front exit but the driver came from behind the wheel to block this door. Once again, ‘Give me your passport’.  No. It transpired that all I had done was to fail to swipe my ticket across the scanner. This all seemed a little heavy handed and then I realised what was going on. I weighed up my options which were limited and decided I had no choice other than to go along with the situation. I showed my passport but pulled it back when the conductor tried to take it. A fine of 50 lei (just under £9) was levied which I paid in cash. When I asked for a receipt, the thug in the doorway laughed and shook his head. The driver got back behind the wheel and drove on a short distance before stopping again where it was suggested I get off. I grabbed my bike and said my goodbyes.

As an independent traveller you experience both the best and worst a country has to offer and whilst this incident was unpleasant, it did provide an insight into the corruption that is still prevalent within Romania. Later, on the train out of Bucharest, the guard seemed particularly keen to establish my nationality. There seems to be an unhealthy distrust of western Europeans and I was visually chastised by my fellow travellers for the rest of the journey.

Gazing out of the train window gave an insight into both Romania’s past and present. There are tracts of land populated by large rusting relics, a legacy of an industrial past, alongside recent yet seemingly abandoned developments funded by EU money. Although a member of the EU, it doesn’t seem to sit well with the country, especially outside of the cities where it is common to see horse drawn carts used as a form of transport and people working the land by hand. Brussels and its bureaucracy couldn’t be further from the minds of the people who are busy with their lives, not so much improving their lot but simply maintaining it, living and working the land with pride, because it has always provided for them. Perhaps

I should have taken more photos but it felt voyeuristic and almost patronising. I wanted to share my thoughts, those of understanding and envy of such a simple and uncomplicated lifestyle.

Like many people, I was aware from what I’d read in the press of the apparent horrors of the Ceausescu regime. Yet talking to the people 25 years after his demise I was surprised to hear the vast majority thought that life was better under the regime. It would seem that as long as you toed the communist line, life though perhaps not as comfortable as we have come to expect, was bearable and work was plentiful. Whereas now, whilst the educated seem to thrive within this relatively new democracy, many people, particularly in the countryside are struggling. And this is evident in the towns and cities which are bustling. Having enjoyed a particularly long descent on some fantastic technical singletrack I literally popped out in Brasov, a city with a similar population to Swansea. Sitting with a coffee in the main square, I couldn’t help but draw comparisons, it was alive! No litter and no graffiti, not because there was an army of street cleaners but because the people have pride in their city. There were dozens of independent thriving shops and groups of teenagers, laughing and chatting, with bags and books rather than pushchairs. It was a pleasure just to sit and watch the world go by. 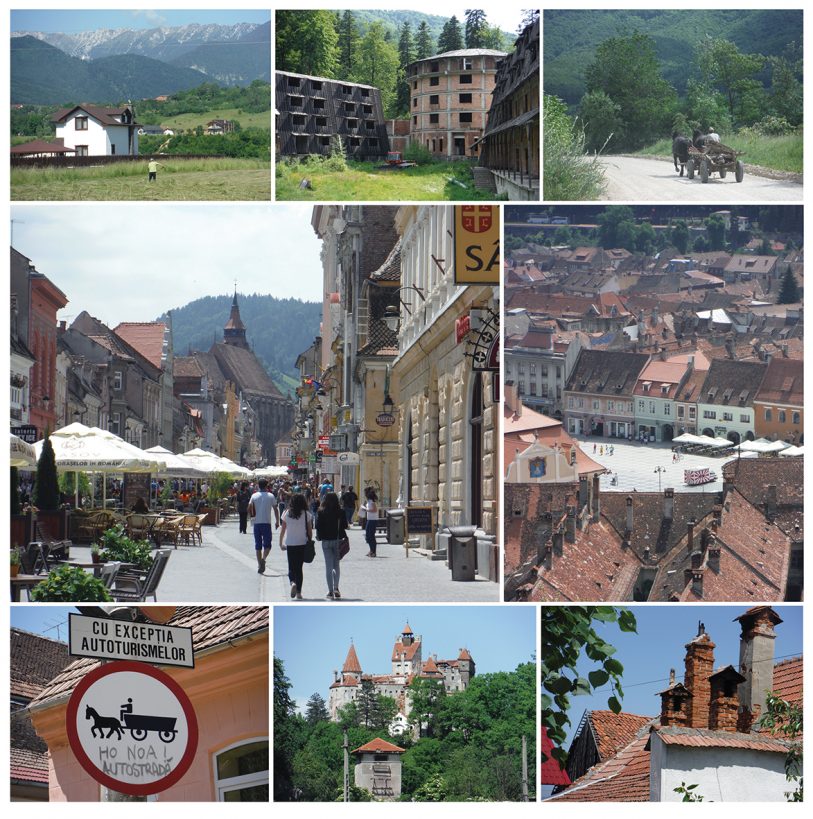 Travelling by bike frees you from the inhibitions of being reliant on public transport. The freedom it offers more than outweighs the limitations and this trip was to prove no exception. It never ceases to amaze me how accommodating hotels are when I wheel my bike into reception looking slightly the worse for wear and clearly in need of a shower.

In Transylvania, I often stayed 2 nights at a hotel which gave me the opportunity to explore the local area whilst leaving my kit in the room. If you like walking, skiing or mountain biking, this is a wonderful country to visit.  Yet when I spoke with the people they genuinely seemed unaware of the potential for tourists from outside of Romania and I gained the impression that there is perhaps a lack of funding to promote tourism on the international stage. Some of the ski resorts have half completed buildings, again suggesting a lack of funding and out of season some of the lifts only operate on the weekends. That aside, there are extensive way-marked walking routes on which you are also allowed to ride and these provide some fantastic and at times challenging mountain biking. They are peppered with huts in which to break your journey if you are embarking on a multi-day trip. The country is heavily forested with an abundance of wild life, with both bears and wolves roaming free, which gives a bit of an edge to the outdoors; a village I passed through had lost several dozen sheep to the various packs of wolves that live in the surrounding hills. Outside of the towns English is not common and dining out can be interesting. Whilst eating a bowl of soup I was surprised when a ball of meat popped to the surface. The waiter laughed and pointing at his head started snorting – pigs brains!

Towards the end of the trip I stayed in Busteni, a small town with the wonderfully named Ilie Nastase tennisarena and a town which clearly bene- fits from the residency of the regional mayor. I used the cable car to take me up on to the Bucegi plain, where lies Romania’s highest mountain, the Moldoveanu Peak, which at 2505mts provides a giant playground for moun- tain bikes. I’d enjoyed a great day and was heading back down to the hotel when looking at the map I noticed a track through a not insignificant forest that would knock a good 10km off my journey. The light was fading when it all went bravo two zero; I was lost! I had no option but to retrace my steps. This took a little longer than I thought and darkness was looming when

I returned to a known point. There at my feet where I’d been only an hour before, was the tell-tale signs of a bear. Now there is nothing quite like the thought of a bear roaming in the woods around you to focus your mind.

Suddenly I wasn’t tired anymore, time was of the essence now as I had no lights. I pedalled off, every sound, every movement seeming to give me an injection of energy. It was dark when I arrived back at the hotel and I slept particularly well that night, safe in my bed!

If you are used to highly organised and efficient European ski resorts, which have year round lifts to expand your walking and mountain biking horizons and high prices to match, visit Transylvania. It will be a refreshing change. 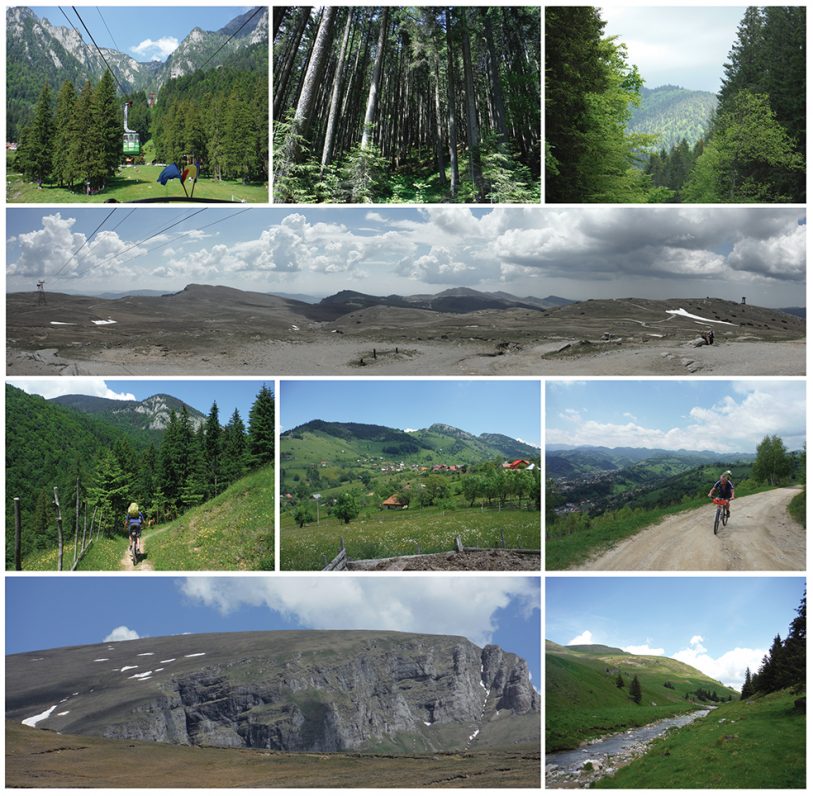