CUBA HAS BEEN ON LIZ BARRY’S BUCKET LIST FOR SOME TIME SO WHEN THE OPPORTUNITY AROSE FOR HER TO PICK UP HER PASSPORT AND PACK UP HER CAMERA AND HEAD FOR HAVANA, THERE WAS NO STOPPING HER 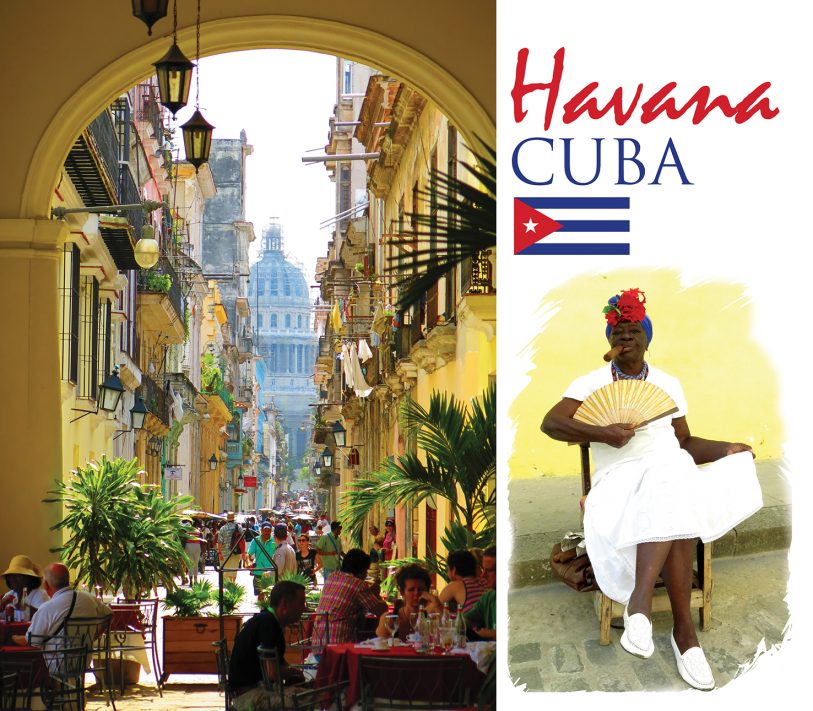 I arrived at Jose Marti airport and stepped through the automatic doors into the heat of the Caribbean evening. A fiery red 1952 Chevrolet awaited my arrival and Toni my Cuban taxi driver was about to whisk me off on a journey that felt like I was travelling back in time.

Toni manoeuvred the Chevy through the traffic which was made up of so many classic cars that it was as if I was part of a moving car museum, past murals with revolutionary themes and facades of decaying buildings to the Hotel Beltran in the historic city centre known as Havana Vieja or Old Havana.

The cobbled streets, plazas, churches, forts and colonial architecture of Old Havana together make up an area which was recognised as a Unesco World Heritage site in 1982.

The Office of the Historian of the City of Havana established in 1993 operates outside of the government and uses tourism money to fund the preservation of hundreds of landmark buildings in the colonial section of the city, which dates back to 1519. As the beauty and charm of Havana is restored,visitor numbers grow. This allows further restoration to take place.

Many of the squares look amazing, fringed with freshly painted wooden shuttered buildings with beautiful half-moon stained glass panels. The open plazas are vibrant with life from the outdoor cafes. Although, should you walk a few streets further away in any direction you will glimpse the aged, lived-in homes of the city’s inhabitants. Enormous, creaking, wooden doors open into narrow passageways where the peeling paint of the  interior walls mirror the outside. Rusting swirls of wrought-iron screen crumbling balconies draped with lines of colourful washing. Gardens of cacti and green shoots, sprout vibrant blooms that tumble out of old tins and terracotta pots.

Each morning the city wakes to a cast of colourful characters. Dapper old men in straw hats, cane in hand, stroll along with a Cuban cigar to their lips. Sashaying ladies in layers of floral cotton skirts, balance fruit on their turbaned heads, smiling cheekily behind fluttering fans. They are rehearsed and ready to pose for a photo in exchange for only one peso.

Queues of men and women form outside the local bodegas (state run food stores). These shops with their brown wooden counter tops and sparse shelves devoid of packaged goods are quite a contrast to our local corner stores. Each person receives a basic supply of rice, bread, eggs, beans, etc. each month, which they obtain through a ration system. These items are obtained extremely cheaply as the average Cuban earns less than £20 a month. 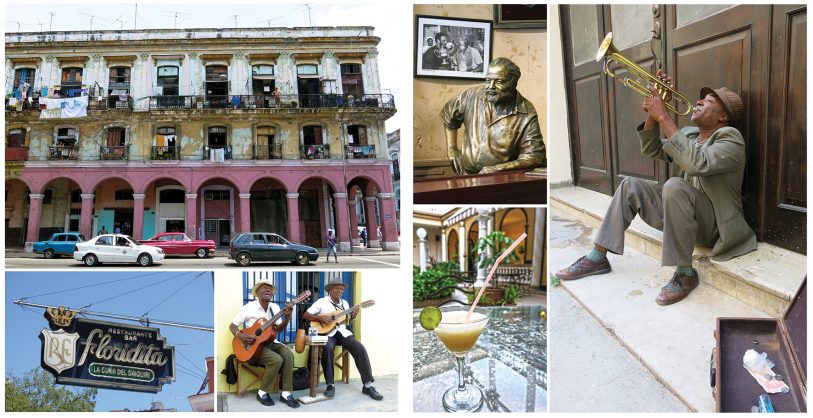 Music can be heard all around the city. From behind closed doors drifts the strains of practising musicians, while on a street corner a single trumpeter sits and plays, his instrument box open for tips. Further on, perched on wooden stools a pair of strumming guitarists entertain passers-by, and being more entrepreneurial they have in a make shift box, CD’s of their music for sale. Day or night, the city moves to a salsa beat and you can listen to traditional Cuban music whilst being captivated by the passion of the dancers in many of the bars and cafes.

Music and rum are enjoyed by Cubans and tourists alike. There is a museum dedicated to rum, where you can join a tour and learn more about the distillation process and sample various aged rums.

El Floridita is the place to sample rum cocktails. It was one of author and journalist Ernest Hemingway’s favourite haunts. A bronze statue of Hemingway stands in the corner of the bar where he proclaimed the best Daiquiris in the world were made. Another cocktail favoured by Hemingway was a Mojito – for these he went to La Bodeguita del Medio La. This is a fascinating local bar easily located by the artistic graffiti that covers the building, near the Cathedral in Old Havana. 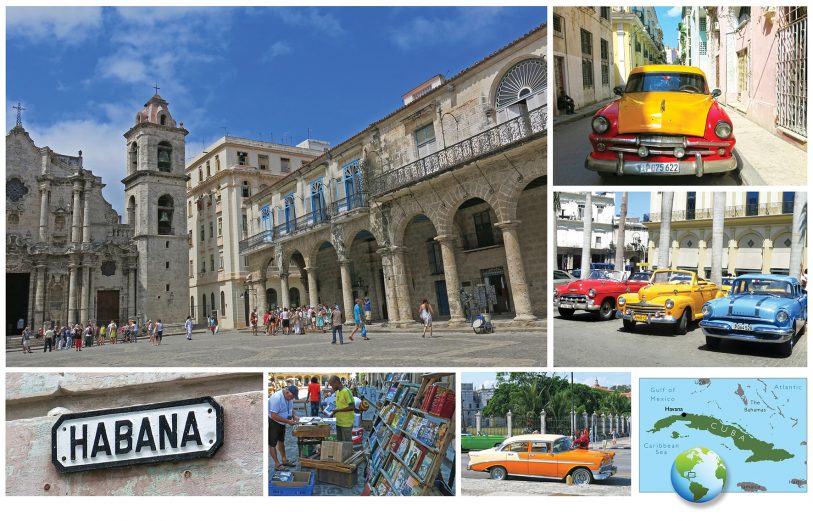 Plaza De La Catedral is where the city’s Baroque Cathedral stands. It dates back to the 1700s and is dominated by two unequal towers. Plaza De Armas is another of Havana’s squares which is nearby. Every day it is home to a second hand book market which is held beneath an avenue of royal palms.

Parque Central is a quiet haven away from the bustling traffic. Don’t be alarmed if you see a group of men, voices raised in disagreement, arms waving – they are sports enthusiasts who daily gather to discuss baseball, which is a big part of Cuban culture.

Parque Central is flanked by rows of American classic cars being polished by their proud owners until the paintwork is gleaming, just waiting to take visitors on a tour. There could be no better way to take in the character and charm of this city than from the back seat of a convertible, the wind blowing through your hair, driving around in a Cadillac, Buick, Dodge or Oldsmobile, which is probably running with a  Lada engine.

The Malecon is an 8km sea drive which becomes an open air theatre as evening approaches and a parade of locals come out to socialise. It is watched over by the lighthouse at El-Morro Castle which guards the

opening into Havana Bay. A visit to the castle also offers excellent views of the Havana skyline, especially at sunset when this impressive city shimmers as day turns to night and the rhythm of the city quickens.

www.cubatravelplan.co.uk part of Rickshaw Travel can arrange independent travel to and within Cuba.