Last year I visited Lithuania at the invitation of the Lithuanian Tourist Board. On that trip I met up with Simon Fry, a travel writer who has been published in The Independent,The Independent on Sunday and Rugby World to name just a few. Simon got in touch with TheBAY last month as he had just returned from a trip to Paris that he thought we might be interested in. We were and here is his account of that trip. (BAY editor – Lesley Williams) 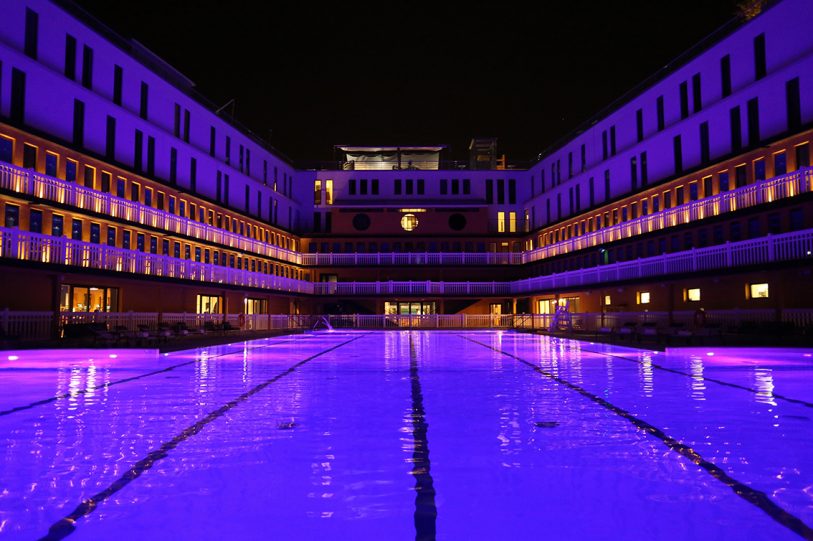 I remove my logoed robe and slippers and step into the pool where Tarzan swam, in water so pure Hollywood made it a star. Glancing sideways I see where the modern bikini first sent eyes out on stalks, glancing up I see blue sky, as Parisians would have when first swimming here 85 years before. Circuiting, I do as ice skaters did when these waters were turned annually into a wintertime ice rink. I am at Piscine Molitor.

Or rather, I am at the 5-star, 124-room Molitor Paris by MGallery, a hotel with as amazing a back story as any on Earth.

Piscine Molitor, with its indoor and outdoor pools and Art Deco splendour was opened in 1929 by US swim-ming and diving stars Johnny Weissmuller and Aileen Riggin, who between them had 9 Olympic medals including 6 golds. Weissmuller worked as a lifeguard during the complex’s first season, before becoming Tarzan in 1932.

Architect Lucien Pollet designed Piscine Molitor to resemble an ocean liner, with storeys of cubicles rising up around its pools. The complex drew Parisians throughout the year, its outdoor pool being converted into an ice rink by way of an ammonia machine until health and safety legislation stopped the fun in 1978.

Events staged include the launch of the modern bikini on July 5 1946. Model Micheline Bernardini, (pictured left) a 19 year-old nude dancer from the Casino de Paris subsequently received over 50,000 fan letters.

The lead character in the quadruple Academy Award-winning film Life of Pi is Piscine Molitor Patel, so-named because his father wished for him to have an untainted soul like the complex’s pools’ water.

By 1989, however, the complex had become commercially unviable. Closure was followed by the installation of hoardings to keep out trespassers, and after these became covered with graffiti, the artists soon broke in to use the complex’s walls, and those of its swimming pools, as their canvas.

After decades of uncertainty, an 80 million euro project saw demolition of the premises’ decaying concrete and reconstruction as close as possible to the original (albeit with the addition of a hotel, Clarins spa and art space among other new features.) Before the official opening on May 19, Nicole Pollet, 90 year-old daughter of architect Lucien Pollet, was given a personal tour. Her first visit in 70 years, she found her rebuilt childhood holiday place as she remembered it and was moved almost to tears.

A similar endorsement of the new incarnation came from 87 year-old Claude Weill, who first swam here in 1933. For the last 30 years his wife and he have lived overlooking the forlorn abandonment. Author of ‘Molitor Les Piscines et la Patinoire’ (‘Molitor The Pools and the Ice Rink’ www.editions-glyphe.com) the couple were first to book into the hotel and stayed on the opening night.

On arriving, Parisians are seem-ingly drifting in off the street, as though dropping in on a dear friend who’s been away too long. The mood is open, warm, familial, and celebratory.

On arriving, Parisians are seem-ingly drifting in off the street, as though dropping in on a dear friend who’s been away too long. The mood is open, warm, familial, and celebratory.My stay came three days later, on the Thursday before Sunday’s French Open’s first day.

Shown to my room, I look out through the porthole-style window and gasp at the sight of the outdoor pool beyond. I am told later this is where ‘the boss’ stays when he visits, ‘the boss’ being the former chairman of the Paris Saint-Germain football club.

The open window lets in the beguiling gurgle of the pool’s water being aerated, proof of the location’s unlikely tranquillity. I later get a blissful night’s sleep in a wonderfully spacious bed, elevated as though on a hovercraft’s inflated skirt.

Before doing so, I check the glamorous rooftop terrace and take a selfie with the Eiffel Tower prominent.

In the morning, I jog to the aforementioned landmark then swim, a magical dip I shall never forget. With a Vélib’ station nearby, the opportunity exists for a very Parisian triathlon.

Breakfast is in the restaurant, designed by a three-Michelin-starred chef, boasting original mosaics and light fixtures and floor-to-ceiling windows. This may be one of Paris’s most aspirational hotels (I spot a former tennis player among fellow diners) but the dress code is casual.

I am shown the extensive spa facilities before heading off for a day in which I pay my respects at the Lizard King’s resting place across town.

At 5pm I toast the ‘new’ Molitor with Mr and Mrs Weill, in their flat, and an hour later meet the hotel’s PR in its lobby, who has a surprise for me.

Barely believing my ears, I carefully secure my wristband and head to the building’s bowels, where children are warming up in the emptied indoor pool ahead of the stars’ arrival.

Like Madame Pollet, I am reminded of a childhood haunt – Bristol’s Barton Hill Baths, long since a primary school, with its cubicles encircling its pool and its air filled with echoing, excited cries.

These cries reach fever pitch when first Serena, then Rafa, are introduced, before two lucky youngsters join them for mixed doubles. 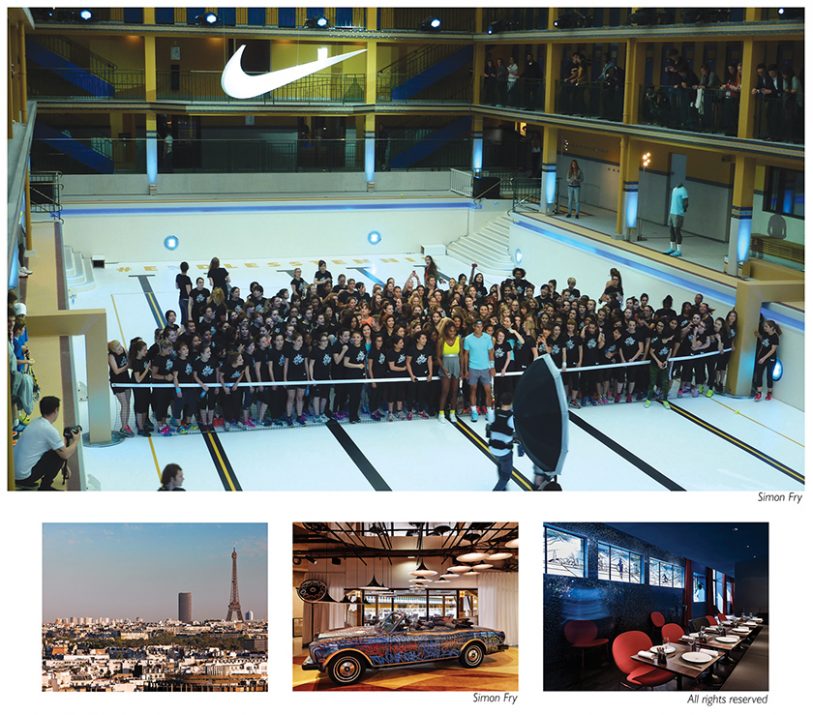