A weekend with Nellie in her nightie 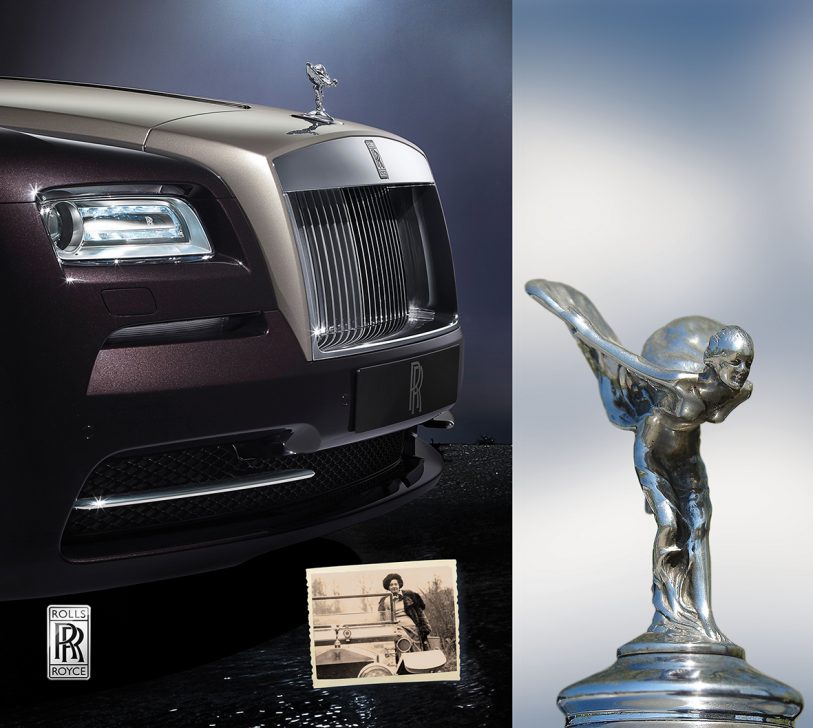 Eleanor Thornton. Does the name mean anything to you? I had a feeling it might not. But, I can almost guarantee that you, like me, will have admired this most elegant of ladies from afar on probably more than just one occasion.

Still not ringing any bells? Allow me to explain.

Eleanor Thornton, or Thorn as she was known to her lover, John Scott-Montagu, second Baron of Montagu of Beaulieu, used to pose for Scott-Montagu’s friend, the sculptor Charles Sykes – she was a model after all, as well as being Montagu’s secretary. Syke’s first sculpture of Miss Thorn was called The Whisperer; he had Eleanor

pose pressing a finger to her lips as if to suggest she was concealing her and Montague’s secret love affair.

Soon after a second sculpture was commissioned; only this time Miss Thornton stood in her nightdress, leaning slightly forward, and with her arms stretched out behind her. It’s that second sculpture, which those who knew of the Montague’s and Thornton’s affair and rather disparagingly christened Nellie in her Nightie that you’ll recognise more instantly. It went on to become known as The Sprit of Ecstasy. It’s Roll-Royce’s, indeed the automotive world’s, most iconic of emblems.

It was actually Claude Johnson, the then managing director of Rolls-Royce who commissioned Sykes’s second and far more famous statue. His brief stated that above all it must convey

“the spirit of the Rolls-Royce, namely, speed with silence, absence of vibration, the mysterious harnessing of great energy and a beautiful living organism of superb grace…”

To cut a long story very short, Eleanor Thornton has graced more or less every Rolls-Royce radiator ever since. And, having just spent a weekend with Rolls-Royce’s latest Wraith I’m pretty sure that original ethos of Mr. Johnson’s very much lives on.

The Wraith is Rolls-Royce’s most sporting (although you get the impression they’d hate you for saying so) motorcar to date. Based on their Ghost, but with a 24mm wider track, a 175mm shorter wheelbase, stiffer springs, and even a thicker rimmed steering wheel, this two-door, 2.3 tonne coupe hides a 6.6 litre twin-turbo V12 under its vast bonnet. With whopping 624 bhp of “great energy” at its disposal it is by far the most powerful gentleman’s conveyance ever to carry the flying lady.

Now, it could be considered a little vulgar perhaps, or uncouth by some elements of society maybe, to discuss Rolls-Royce performance figures. Rest assured though, if you have a mind to bury your right foot into some of the deepest carpets I’ve ever encountered in a car, whatever it is that has been filling the mirrors, or blocking the view through Wraith’s sloping rear window, will effortlessly and very quickly disappear. Say it quietly: The Wraith does 0-62mph in 4.4 seconds.

Hushed tones too, are all that’s needed once you’ve settled underneath the Wraith’s (optional) fibre-optically lit Starlight headlining and made yourself comfortable inside its un-ashamedly luxurious and sumptuously appointed leather-clad and wood-lined cabin. One press of the discreet button that brings the Wraith’s enormous rear-hinged doors to a close and it’s as if the chaos of the outside world simply ceases to exist. Regardless of the road surface, the surrounding traffic, your chosen speed, or even the rabble of the riff-raff who instantly reach for their camera-phones as you waft by, the Wraith glides gracefully along on its computer –controlled air-suspension, ironing out the bumps as if they simply weren’t there.

Despite its size you can guide this most grand of grand-tourers with precision, and without drama. Show it a corner and it settles and grips in a way that the Rolls of old could only ever dream of. The gearbox is satellite guided – each of eight ratios are selected prior to what’s coming up ahead – and the changes are seamless. The only indication of any cog-swapping  is the slight flutter of the dashboard’s power reserve meter – there’s nothing as common as a rev-counter here – as you brake, or power out of a bend. And, even when you’re really in a hurry, such are the engine’s reserves of both power and torque, you’re unlikely ever to see less than 60% displayed on that elegant little dial. You’ll notice the fuel needle drop though; the Wraith’s official fuel consumption figure is 20.2 mpg. In the real world you’ll get less.  But then, if you can stretch to a Rolls…

Sadly my time with the Wraith, like the life of Miss Thornton was over all too quickly. On 30th December 1915 Eleanor was drowned when the SS Persia, on which she and John Montague were sailing to India, was torpedoed, without warning, in the Mediterranean by a German U-Boat. Montagu survived, but it is said that he have never got over the loss of his beloved Thorn.

I lost “my” Eleanor when the man from Rolls-Royce turned up on a Monday morning and politely asked for his car back.

Many thanks to James and Henry at Rolls Royce for the loan of the Wraith www.liam-bird.com / @bird_liam