Vic Potter of THREE FEATHERS PEST CONTROL gives readers advice on various household and garden pests. This month he focuses on the little gentleman in black velvet – the mole. 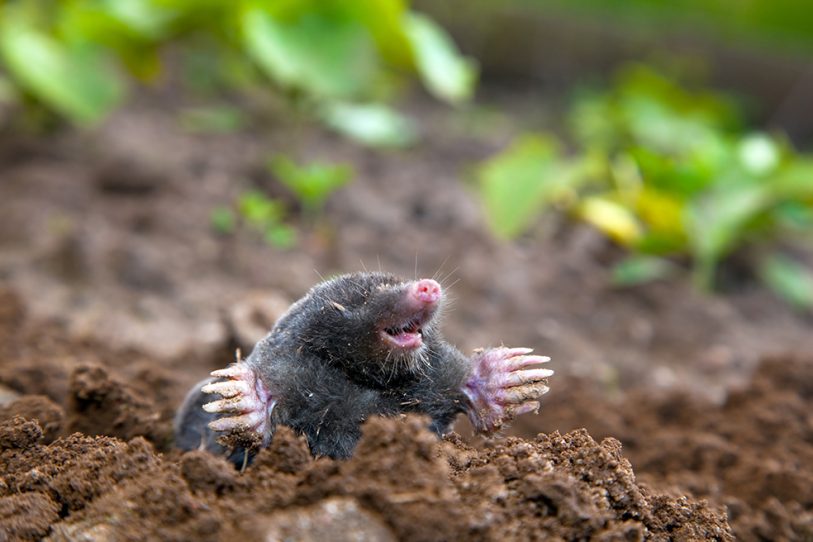 The mole is a common British mammal and although not often seen, the results of its tunnelling are well known and may cause damage in a range of situations in gardens and amenity areas. Mole hills and tunnels can be a significant nuisance in agriculture, containment of the grass by soil may lead to poor quality silage being produced. There is also a risk of damaging grass cutting machinery. Mole runs may disturb roots and adversely affect plant growth

Moles are highly territorial and generally live alone in an extensive tunnel system covering 0.1 to 1.6 HA (1/4-4 acres). Mole hills are created as the animal extends and repairs their tunnels, which act as traps to catch their prey, earthworms. One mole can produce a considerable number of hills, particularly where food is in short supply. Three or four young are born in the spring and these disperse generally over-ground in midsummer to try to establish their own territories.

Before embarking on mole control it is important to consider if this action is warranted or if the mole hills and tunnels can be tolerated. Where control measures can be justified there are two main methods, trapping and gassing using aluminium phosphide.

The timing of control is important and is best carried out between October and April; this is when moles are more noticeable as they are actively digging new tunnels. Control at this time also has the benefits of reducing the population prior to the breeding season.

The Traps are spring operated and designed to kill the mole, there are two main types of trap, the scissor (or pincer) and the half barrel trap.

Effective trapping and gassing relies on locating suitable runs. These are the main tunnels which are usually at least 150mm (6 inches) below ground. They are found by using a probe such as a metal rod or

wooden dowel that  is pushed into the ground between the mole hills and the presence of a tunnel is felt by a sudden give in the probe. Runs near the surface of the soil are not suitable for trapping or gassing.

There are two formulations of the fumigant aluminium phosphide currently approved for use against moles. Phostoxin and talunex both applied with topex applicator. The tablets or pellets are placed in deep mole runs via a probe hole made into the tunnel and the gas is then given off when the material is exposed to moisture in the soil. Aluminium phosphide preparations cannot be purchased or applied by householders or other amateur users

Phosphide is an extremely toxic gas and the operators must be instructed or trained in the use and be familiar with the precautionary measures to be taken. Products containing phosphide can be used for mole control in a range of situations including grassland, arable and horticultural land, sport fields and lawns. They must not be used near occupied buildings and particular care is needed to keep children and animals away from treated areas until the fumigant has dispersed.