Back to reality this month – after last months Rolls Royce Wraith…

Our intrepid motoring correspondent Liam Bird test drove the latest KIA SOUL from the South Korean motoring company, and the truth is he rather liked it…in fact….he liked it a lot! 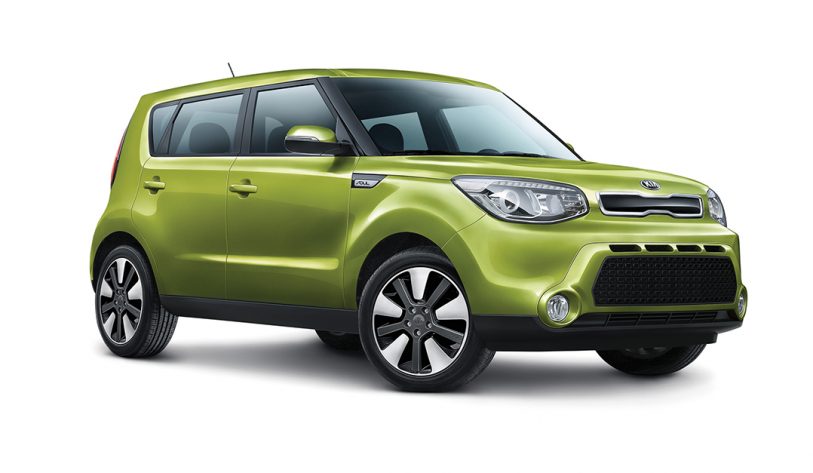 It’s 4 years, or perhaps a little longer maybe, since I first drove a Kia Soul. Back then Kia’s very nice PR lady sent me what was the range-topper: the rather satanically entitled Soul Burner. It arrived emblazoned with dragon motifs that stretched from bonnet to boot-lid, red wing mirrors and grille, speakers that lit-up and pulsed in time to whatever was playing on the radio, and 18” rims and fitted with virtually smeared-on 35 section low-profile tyres. Garish it may have been, but despite the paint-job that probably went down far better in South Korea than it ever did in South West Wales and an interior in which the plastics were as hard, or even harder than the Soul Burner’s ride (I blamed those skinny tyres) I rather liked it.

In fact I liked it more than the Soul’s natural rival, the Nissan Juke, which I drove soon afterwards. And so, in fact did most of California, where the first generation Kia Soul went on to be a best seller. In 2012, the last full year of the original Soul’s production run, Kia sold 165,000 of their “urban crossovers” worldwide. Funny then that the Soul didn’t go down quite as well here in the UK; never really capturing the hearts of the young buyers it was aimed at in the same way as it did in the US. The figures said it all: Nissan sold 37,488 Jukes in Europe in 2012. Kia sold just 300 Souls.

Despite looking remarkably similar to the car it replaces the 2014 Kia Soul is, according the Korean manufacturer at least, totally transformed. The upright stance and square shouldered appearance remain, but as is the case with nearly all new cars these days the new car is longer (by 20mm) lower (by 10mm) and wider (by 15mm). You might be glad to know it’s also quieter and stiffer too – by 29% actually – thanks to the use of under-body deflectors and ultra-high strength steels respectively.

Trak’ster concept car; the fog lamps have been pushed to the extremities of the front bumper, the trademark “tiger-nose” grille has been re-worked a little, and at the rear there’s what Kia calls a floating “back pack” panel set into the tailgate. There’s also LED lamps front and back, as well as LED indicators on all versions from Connect spec upwards. They all hint that the Soul is much more of a premium product than it once was.

It’s inside though where you really notice the differences. There’s more head and shoulder room for a start, and the use of those higher strength steels means the A-pillars are slimmer and the visibility is better as a result. The new seats are a little flat, but their stitching which corresponds to the body colour, and matches that of the thick rimmed multi-function steering wheel and the leather topped instrument binnacle, helps lighten what otherwise could be a rather dark cabin. That’s not to say it’s unattractive – far from it! Soft touch materials share space with high gloss piano black inserts and knurled aluminium knobs, there’s a very clear TFT screened sat-nav (depending on spec), and a digital radio is standard across the range. 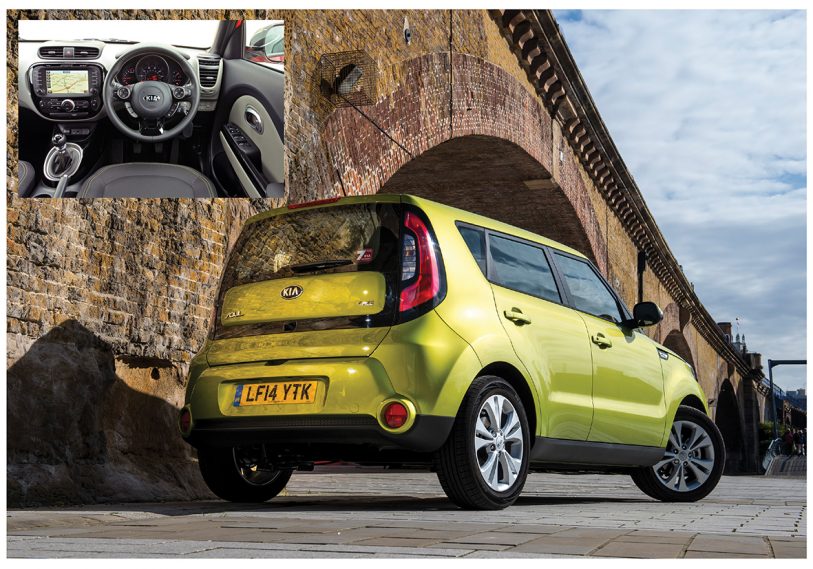 Well, actually nothing in particular. But then again no car is perfect.

Your Soul can either be powered by a 1.6 130bhp petrol engine or a 1.6 126bhp diesel unit. I got to try the diesel, which I suspect will be the bigger seller of the two here in dear old Blighty thanks to it’s better mpg. It’s by far the torqueier of the two engines, and it only loses out on the 0-62 benchmark dash by 0.2 of second. However it does have a tendency to make its presence felt, especially at idle where it’s quite loud, and also when you’re cruising on the motorway where it occasionally sends vibrations through the footwell. You do have to row it along with the six speed gearbox as well. Let the revs drop below 2000rpm and it takes a while before the turbo spools up and things begin to move again. Keep it in the mid-range though and overall its performance is respectable.

I’d better mention the ride too. It’s a bit, well, fidgety. Kia have equipped the Soul with some rather stiff springs that do wonders controlling the Soul’s body during cornering, preventing any unwanted roll. But, overall things aren’t quite as smooth as they should be especially on broken surfaces, and road surface imperfections make themselves all too well known. One other thing: Despite those chunky looks all Souls are two-wheel drive only.

Whether or not that really matters is something only those in the market for a small cross-over can decide. I’d wager for most it won’t be an issue and the Soul will find more homes in the city than it will in the sticks. Kia’s seven year warranty will probably prove a big attraction too.

All in all the new Soul is better to drive, better equipped and better built than it once was. After a week in its company, like the old Soul in fact, I rather liked it.

The truth is: I liked it a lot.