WILL METCALFE returns this month with an update on the children in Mufindi, Tanzania. Will is a doctor who originally trained as a pharmacist, he now works in the paediatric department in Morriston Hospital when he isn’t farming pigs or volunteering with the RNLI!

Following on from my last article about some of my trips to Tanzania to work with Foxes’ Community and Wildlife Conservation Trust, I thought I’d tell you some of the children’s stories, how they came to be living in the orphanage or how they have been helped by the charity. Their stories are vastly wide ranging; from the orphaned 6 and 7 year old brothers who were found living under a tarpaulin in a tea field, being fed by the tea workers in exchange for scaring monkeys away from the tea bushes, to the week old baby whose mother died during childbirth and whose father was unable to care for her.

This time I’m writing from the lifeboat station, waiting for the pagers to go off. It’s a busy time of year for lifeboats so I’m sure the editor will forgive any sentences which end rather abruptly…

One of the first children I treated in Mufindi was a small baby who was subsequently named Bahati meaning lucky in Swahili.

It was my first afternoon back in Mufindi after several years away and I was still coming to terms with sharing a house with a monkey who stole anything that wasn’t nailed down, when there was a hodi at the door (the Tanzanian equivalent to knocking). Bahati’s father had heard that some doctors had come to stay and he was desperate for us to visit his new born son.

Several of us piled into the car and Bahati’s father directed us to his house. There we were confronted with a 5 day old baby who had been born with a cleft lip. He was unable to suckle and his parents had had no other means of feeding him. He was a 5 day old baby who had never been fed, and as such he was little more than skin and bones. He didn’t move or cry. I thought he was going to die whilst we were looking at him. Bahati had been born in a hospital but his mother had been told to take him home as nothing could be done to help him. Other than his cleft lip and his inability to feed Bahati appeared to be a normal baby.

We took Bahati back to the orphanage and put a feeding tube into his stomach and gave him small quantities of rehydration fluid every 10 minutes, and then started alternating that with formula milk throughout the night. Having dozed off in the early hours I woke to the sound of Bahati crying – the first sounds I’d heard him make. I picked him up and he peed on me (an occupational hazard when working with small children, or in A&E on a Saturday night). I’ve never been so happy to be peed on. Within a few days the feeding tube came out and we managed to feed him with a syringe, and later with a spoon.

Bahati and his mother stayed at the orphanage for a month so that she could learn to care for him and could build up strength. When they returned home they were kept supplied with formula milk from the charity.

On the day that I arrived back in Mufindi the following year, Bahati now a toddler, arrived riding on his father’s shoulders for me to see how well he was doing. At 18 months old we arranged for them to travel to Dar Es Salaam where a group of German surgeons were performing cleft surgery. They reviewed him and felt that he was doing well but was still too small for the surgery. He travelled back to them a year later when they operated and successfully repaired his cleft. I still see him each time I go back and he is a happy, healthy child with a full and normal life, all enabled by a £10 feeding tube, a supply of formula milk and some organisation with a team of charitable surgeons. 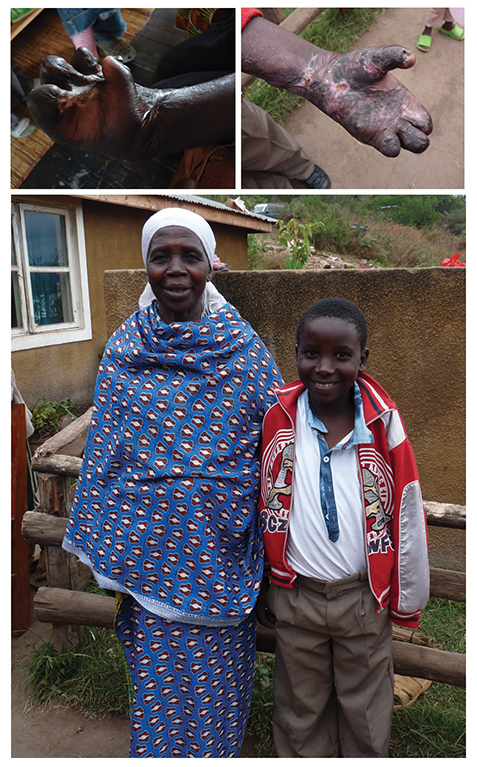 A couple of years ago I took my Mum out to Mufindi with me. She had been a GP in Swansea for over 30 years but had never been to Tanzania. It was on that visit that we met Amani. Amani was a 10 year old boy who had lost both of his parents to AIDS and was being cared for by his grandmother.

Amani is epileptic and a few years earlier he had had a seizure and fallen into a fire. His right hand was badly burnt and he lost all of his fingers on that hand. His thumb was still there but through the scarring process it had stuck to his palm rendering it useless. Despite this he was a very happy, polite and helpful boy with a great smile.

The problem was cost. At this point it became apparent that Amani had definitely played his cards well and won my mother’s heart. She declared that she would foot the bill for his treatment regardless of cost.

It was arranged that Amani and his grandmother would travel to Dar Es Salaam with a helper from the orphanage, they would stay there for 2 weeks for the surgery to be done and to allow the helper to learn how to care for his wounds and how to help him with splinting and physiotherapy afterwards.

I happened to be back in Mufindi 9 months later, just as Amani returned from his surgery (things don’t move quickly in Tanzania). They arrived with a bill from the hospital for the operation and after care, including travel and accommodation for all 3 of them. I had visions of waving goodbye to any chance of an inheritance. The entire bill came to £280 and Amani now has 2 working hands.

Jeska, Johari and Given 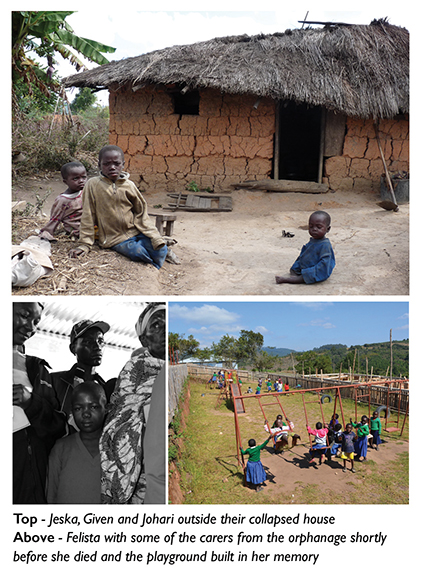 Jeska, Johari and Given were a group of siblings who came to live at the orphanage temporarily after the roof had collapsed on their house during the rainy season. Both of their parents had AIDS and were not well enough to provide for their children or to repair their house.

The children stayed in the orphanage for over a year but have now returned to live with their parents in their new, water tight house. 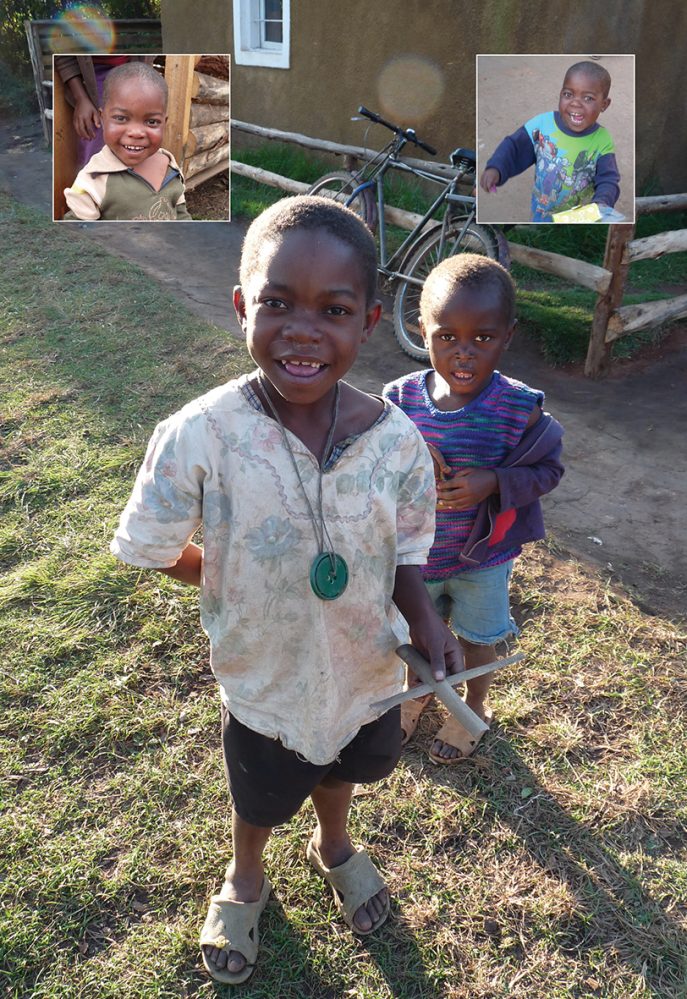 Gift suffered from skin infections and tummy upsets when he first came to the orphanage but with regular antiretroviral medication to supress the HIV virus and an improved diet he grew into a healthy, happy child.Gift is an orphan who lost both of his parents to AIDS. Sadly he too is infected with the HIV virus.  After his parents passed away he was initially cared for by his aunt and uncle. As is too often the case in Mufindi both his aunt and uncle were also suffering from AIDS. They brought him to the orphanage when he was 5 years old asking for help. Due to their own ill health and Gift’s needs they felt that they were simply unable to continue caring for him.

Gift lived at the orphanage for 5 years, during which time his aunt and uncle enrolled in the treatment centre for HIV that was built by the charity and they also started receiving regular medication. They visited him frequently throughout his time at the orphanage and recently felt that they would be able to start caring for him again. As their own health had started to improve they had been able to return to farming and make improvements to their house. Gift has now settled back into his village with what remains of his family but remains in close contact with his extended family left behind at the orphanage.

One good indicator of how the charity is helping to improve the health of not just the orphans but of the wider community is the number of orphans, like Gift who have been able to return to their families in the last year. A year ago there were 81 children living at the orphanage and now that number is just 49.

Unfortunately there isn’t always a happy ending for these children. Sometimes help comes too late, or the services and facilities needed simply aren’t available. Felista was a young girl who was very unwell when she came to the attention of the orphanage staff. She was from a very remote village, had lost all of her family other than an elderly grandfather and an uncle to AIDS and had been stigmatised by her classmates and alienated by her community through a lack of knowledge and understanding.

Felista had AIDS, she was malnourished and had a very poor immune system. Despite the best efforts of all of us, and getting her admitted to hospital Felista wasn’t strong enough to pull through. She was only 11 years old.

A vital piece of equipment for monitoring and treating people with HIV was donated to the treatment centre built by the Foxes’ charity and a playground was built at the orphanage by some of its supporters in Felista’s memory. It is now enjoyed by all of the children.

Finally a quick update on Nache, anyone who read my last instalment may remember that he was a young boy whose life was teetering on the edge. I’m pleased to say that after almost a year on his new medication he is now much stronger and healthier and has even been able to start back at school.

The orphanage and its community projects are always in need of funds to allow them to continue. Any amount will help and will be used directly to support these children and the projects.

£10.00 will pay for a month’s supply of formula milk for a baby like Bahati.

£15.00 will provide a school uniform for an orphan.

£20.00 will pay secondary school fees for an orphan for a year.

Ed: TheBAY has made a donation to the Trust in appreciation of Will’s articles. If you want to donate please visit www.wildorphans.org