LIAM BIRD RECENTLY DITCHED HIS CAR AND WALTZED OFF TO AUSTRIA TO INVESTIGATE ITS CAPITAL CITY, VIENNA 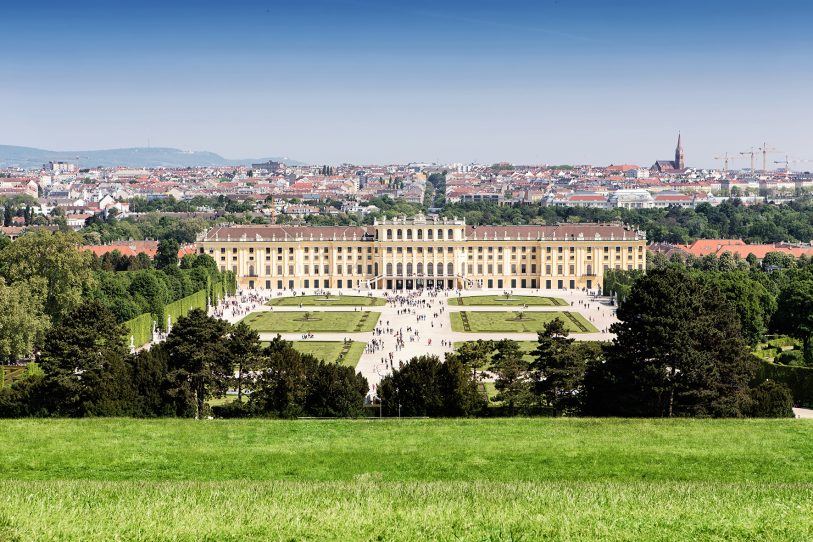 The Austrian capital sits aside the River Danube and is a city of palaces and parks, grand squares and spires, cobbled alleys and coffee houses. And, whether you’re a true culture-vulture or just a sightseer like the rest of us, there’s always something to catch your eye.

It’s also a very easy city to both get to and navigate your way across once you’re there. Vienna’s airport lies just nine miles south east of the city and is served by the City Airport Train (CAT). Clean, fast, cheap, and always embarrassingly punctual, the CAT will whisk you into Vienna’s Wien Mitte district’s shiny new shopping centre in just 16 minutes. A quick walk across the complex then has you connected to lines 2 and 3 of the underground (U-Bahn) system from which you can access almost anywhere. Tickets cost around 9 euros for the CAT and approximately 2.50 euros for a single journey on the U-Bahn.

Within little more than an hour of landing – we flew in with Jet 2 from Manchester in under 2 hours – we had checked into our to hotel, the K+K Maria Theresia on the quiet yet conveniently located Kirchberggasse in the Spittelberg district. Just a couple of streets away from the Volkstheater, the U-Bahn station of the same name, and the city’s Museum quarter, and only, what the Americans would call, a-block-or-two from the Hofburg Palace, the K+K offered us the perfect base from which to explore. It, like everything else we were later to discover in Vienna, was spotlessly clean, beautifully appointed, and effortlessly and efficiently run. The breakfast buffet alone would have happily supported the Austrian army’s days marching; just what you need before taking on one of the Austro-Hungarian emperor’s palaces. 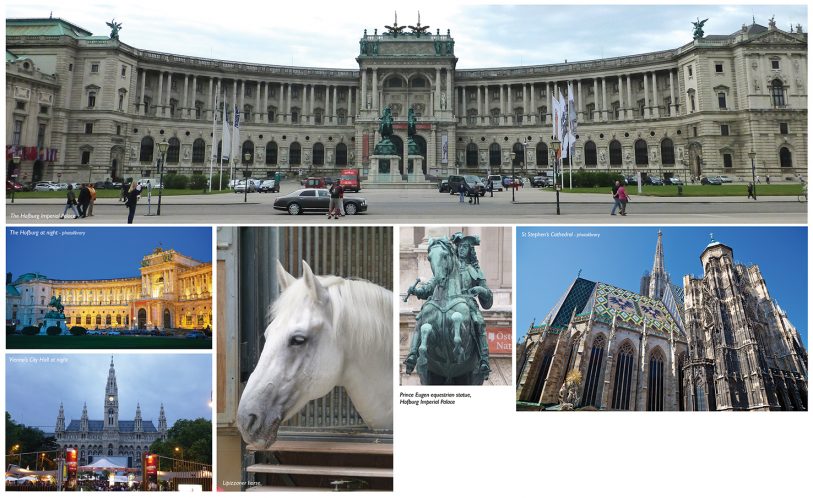 Arguably it’s those palaces that make up Vienna’s star attractions. The Hofburg, just east of the centre of the city’s 14th Century Gothic St Stephen’s Cathedral (Stephansdom) and Vienna’s very swish boutiques and watch galleries on Bognergasse and Kartnergasse,  houses not only the royal apartments and ceremonial halls of the Hapsburg, but also the world famous Spanish Riding school and its almost balletic Lipizzaner horses. Whilst you may not always be lucky enough to bag yourself a ticket for a full performance by these elegant stallions you might just be able to catch them on their daily exercises, or see them afterwards in their most regal of stables.

If you’re not all “palaced-out” after a morning’s meandering around The Hofburg then a visit to the Shloss Schonbrunn is a must, although, you may need more than just an afternoon here – be aware, the queues are long!  Take the short ride on tram no.58 from the Westbahnhof railway station to the South West corner of the city to experience what’s known as the Versailles of Vienna. Built as a summer residence for the imperial royal family, it was later modified at the order of Empress Maria Theresia by architect Nickolaus Pacassi. It’s vast, and it only emphasizes just how important (and imperialistic) the Hapsburgs of the Austro-Hungarian Empire once were. Mozart played his first ever concert here – he was just six – and more recently James Bond (in his Timothy Dalton days) brought cellist squeeze Kara Millovy here when the front staircases doubled as a hotel in The Living Daylights.

The gardens surrounding the Schonbrunn are also home to the city zoo. The pandas and the polar bears make the entry fee worthwhile almost by themselves, although the koalas seem to draw the crowds too.

The Ferris wheel in Prater Park, Vienna’s amusement park to the north of the city may also be recognisable to film-goers. One of Vienna’s most famous landmarks and one of the world’s oldest Ferris wheels still in operation, it too played host to Mr Bond and Miss Milovy, as well as appearing, perhaps more famously, in The Third Man. 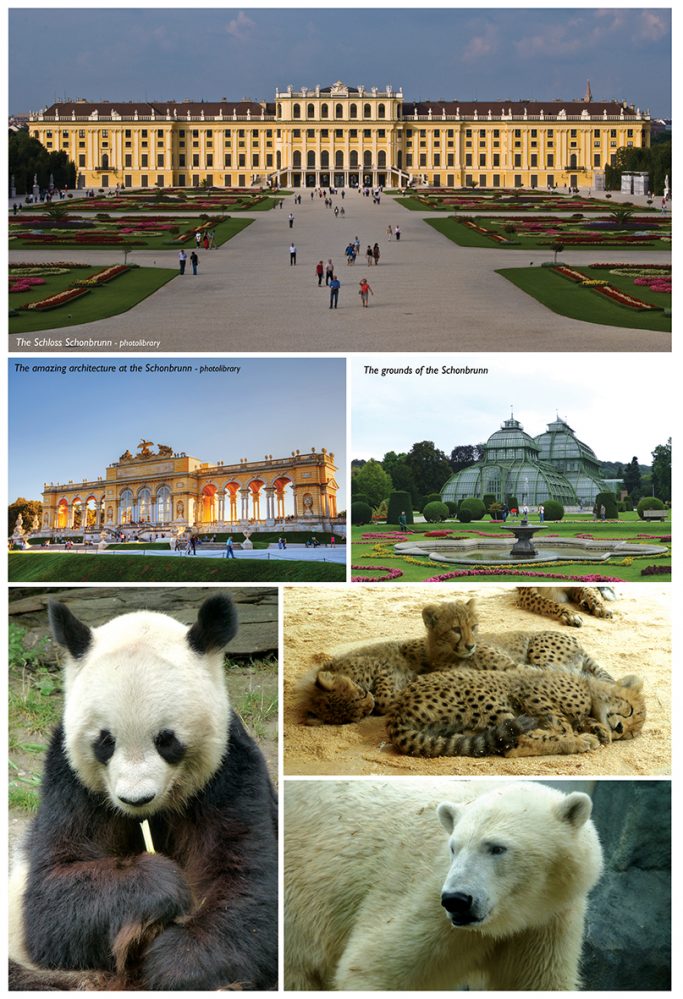 If amusement parks aren’t your thing or you prefer something a little more relaxing, one of Vienna’s ornate coffee houses might be more up your Strasse. Once shown to your table it’s yours for as long as it takes; a good thing considering the myriad of different coffee options available. To sit in either Frauenhuber or Café Central sipping your Brauner, your EisKaffe or your Wiener Malange and the glass of water that always accompanies each of them, is to sit where once Freud, Klimt, Beethoven, Mozart, Strauss… et al may once have sat. Although quite whether they got through quite as much Sacher Torte and Schwarzwalder-kirschtorte as I did in 4 days is another matter! Vienna’s patisserie is to die for. I probably owe my waistline an apology too. 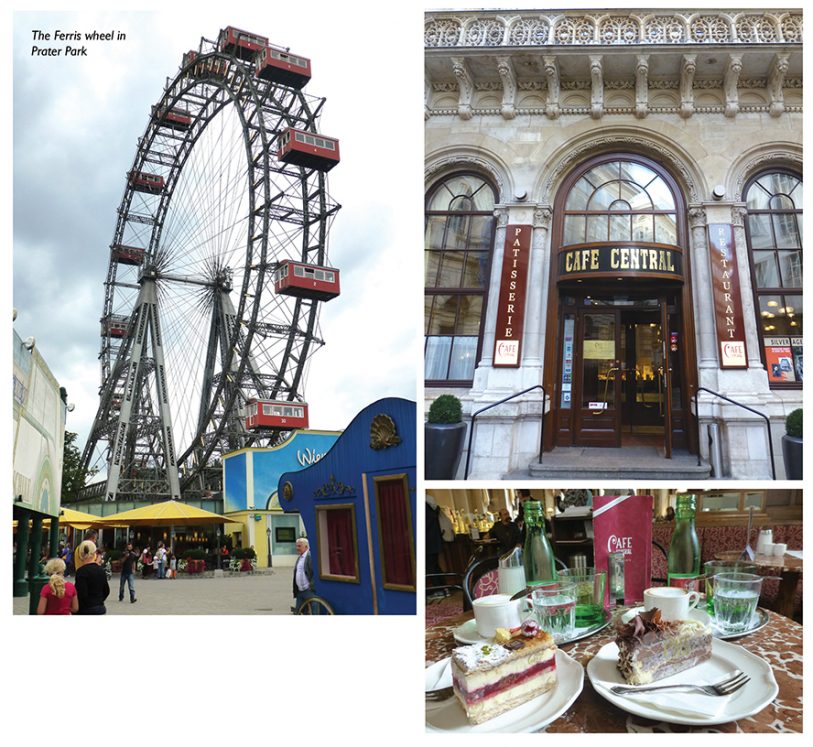 In a bid to avoid death by chocolate for a few hours we travelled over the border into Slovakia. Just an hour away (if you get the fast train) Bratislava is a much smaller and quieter city complete with an attractive medieval market square, city hall, and castle. The UFO Bridge that spans the river is a reminder perhaps of Bratislava’s time behind the Iron Curtain, as are some of the buildings and smokey buses that surround the railway station. Nevertheless our little excursion was well worth the 15 euro return ticket fee, and the coffee and cake served in the square (we couldn’t resist) were equally as good as those served in Vienna. Blow the diet!

Try as you might, you can’t help it. And yes, it’s a cliché. And no, for once I’m not talking about cake.

If you’re of a certain age, like me, it’s all too easy to find yourself humming the hit record by Ultravox as you stroll around Vienna. However, it would appear Billy Joel wrote something far more appropriate than Midge Ure ever did:

“Take the phone off the hook and disappear for a while
It’s alright, you can afford to lose a day or two
When will you realize… Vienna waits for you?”

If you want my advice; don’t let Vienna wait too long. 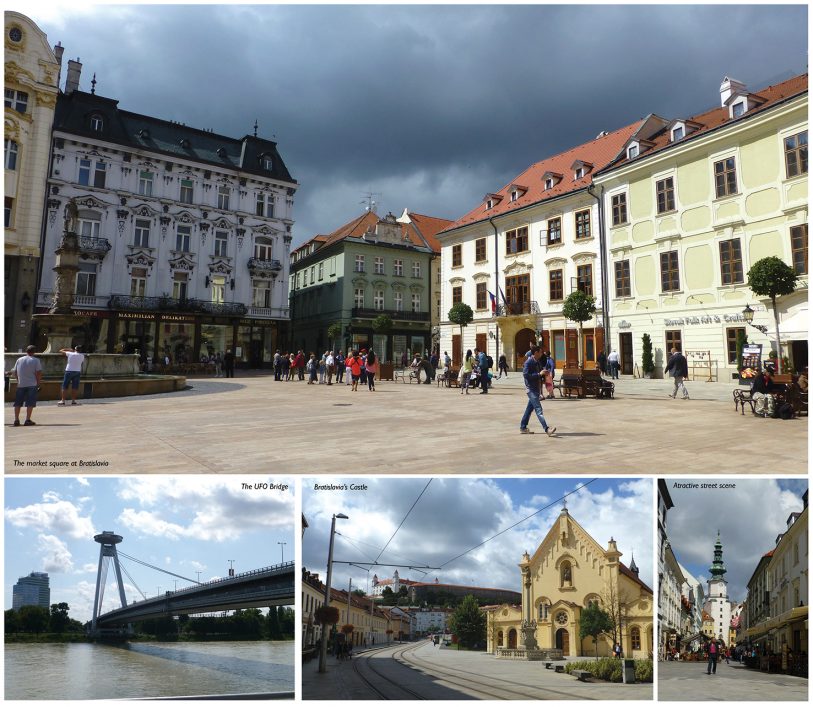