Sark – an island for all seasons

Last year LIZ BARRY took a late summer trip to the Channel Islands. In April we published her journey to Guernsey, this month we continue onto one of the smaller islands, SARK 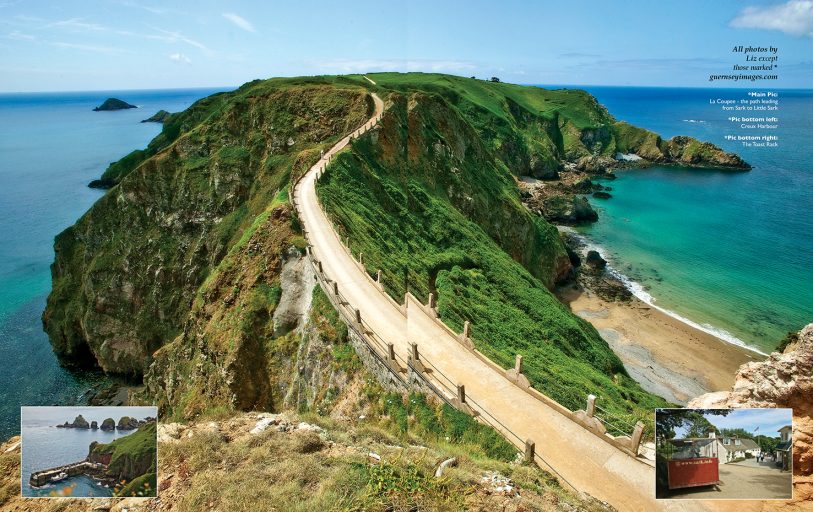 The island of Sark lies just six miles east of Guernsey and 20 miles from the coast of France. Frequent passenger boats from Guernsey take visitors to the island. There are no cars, and the only way up the hill from the harbour is by foot or by tractor bus, inexplicably known locally as the ‘toast rack’.

With a population of 600 inhabitants it is far removed from the hustle and bustle of the mainland and is the second smallest of the Channel Islands measuring three miles long by one and a half wide.

There are luxury hotels on Sark, alternatively you can share the home of a local family and stay in a bed and breakfast, and learn about the history of the Island, rent a self-catering cottage or nestle down under canvas at one of the two picturesque campsites. 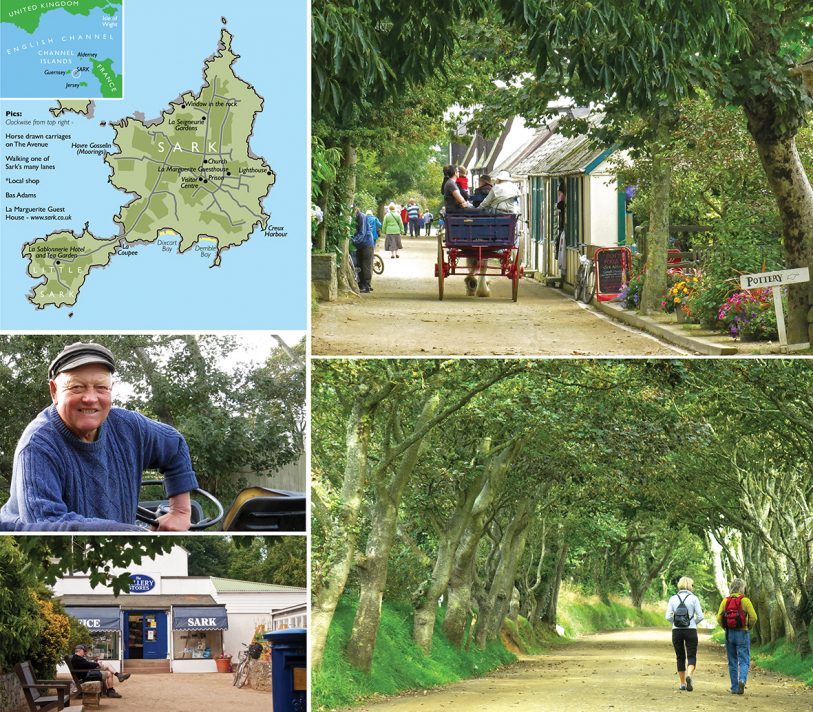 I stayed with Mrs Suzette Adams and her husband Bas, at La Marguerite Guest House. Bas Adams was born on the island and is a fisherman. Every day from March to October he takes to the sea in his boat to tend a string of lobster pots. He is never without a smile and is quite a character – and a bit of a celebrity who is easily recognizable from the BBC series An Island Parish when cameras followed him around on land and sea.

Horse drawn carriages wait at the top of the harbour hill, at La Collinette, to take visitors on a meandering ride along the island’s country lanes. The Avenue is the main shopping street; here coffee shops and restaurants squeeze alongside souvenir shops selling locally made pottery and jewellery as well as watercolours and handmade chocolates.

Little Sark is joined to Sark by a narrow isthmus at La Coupee. From this great vantage point you can view the unrelenting ebb and flow of the blue water as it sprays the rock face far below. 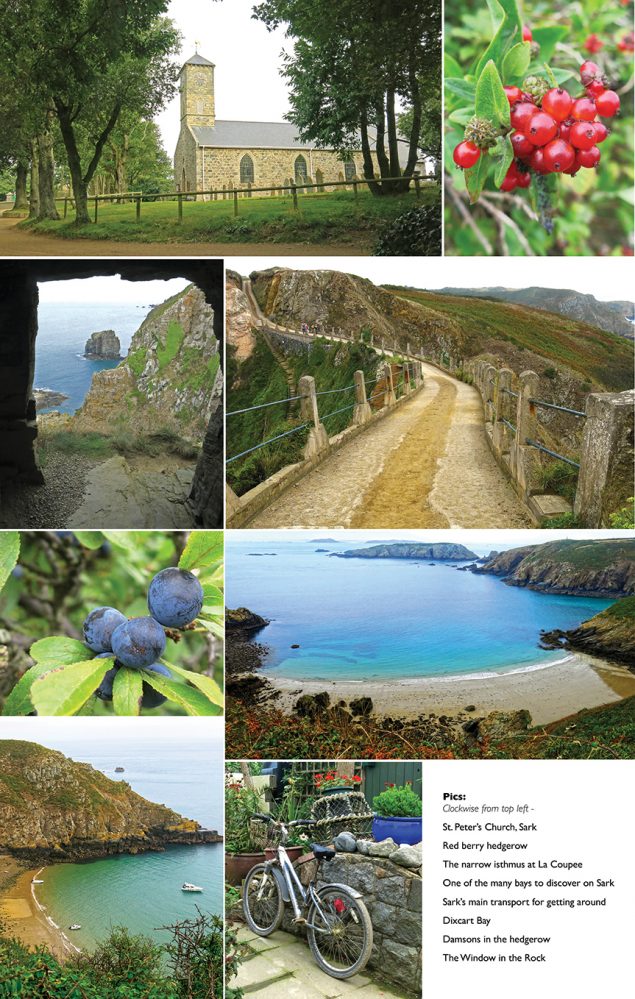 An unusual viewpoint out to sea is found from the Window in the Rock at the North West of the island. In the under-growth to the left of the window, rusty, but still in place are the remains of old winding gear, used to bring up seaweed that farmers applied as fertiliser on their fields.

Along the pretty hedgerows a profusion of coloured wild-flowers bloom in spring and summer. Over six hundred species of plants have been recorded attracting many insects and bees besides providing a shelter to wildlife. For birdlife and butterflies as well as a stunning display of cultivated flowers in formal gardens, a tour of the La Seigneurie Gar-dens is a must; it is also the official home of the Seigneur or Lord of Sark.

Sark is a fusion of English and French. The Société Serquaise was founded in 1975 to ‘study, preserve and enhance Sark’s natural environment and cultural heritage’. It is located at the Visitor Centre which is manned by volunteers and houses exhibitions and collec-tions that chronicle the island’s past. The build-ing was once the two classrooms of the Girls School back in 1841 and next door is the world’s smallest prison built in 1856. Fortunately the crime rate on the island is low, as it can only house two prisoners. 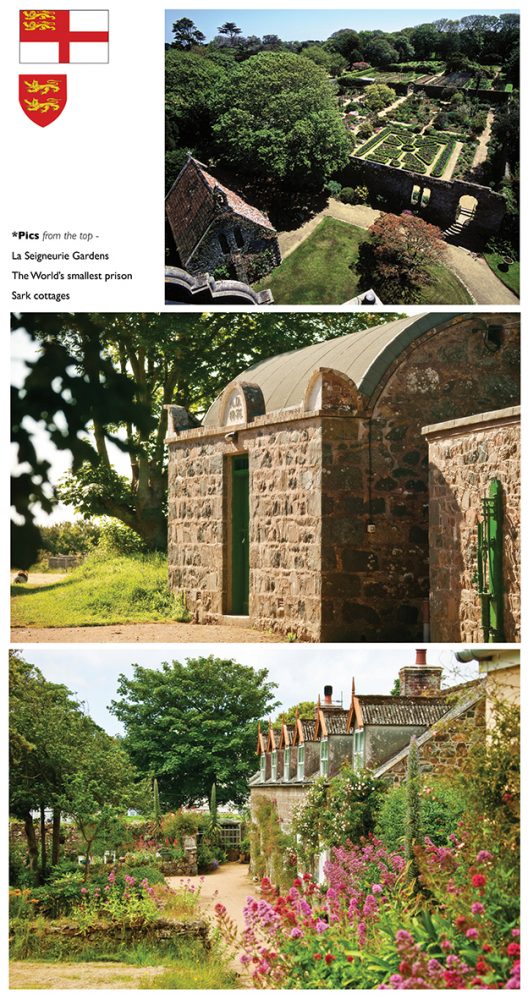 Sark is a haven for star gazers – on a clear night you can see the Milky Way. In January 2011 the island was awarded recognition from the International Dark – Sky Association for the exceptional quality of unpolluted darkness. This included an assessment of the sky darkness and an audit of all the external lights, which involved many local residents and businesses altering their lighting to make them more dark-sky friendly.  Satisfied that all criteria were met, Sark became the world’s first Dark Sky Island.

As there is no traffic it is very peaceful and without street lights it is very dark. So as long as you are wrapped up, and have a torch to hand, you can walk through the country lanes and out into the open fields, turn your gaze skywards and watch for meteor showers and the brilliance of other winter constellations. Or join an evening outing with members of the Sark Astronomy Society, formed as a result of the award, who are more than willing to impart their knowledge to fellow star gazers. Sark is an Island for all seasons, a place where you feel as if you have stepped back in time and can move at a far less hurried pace. 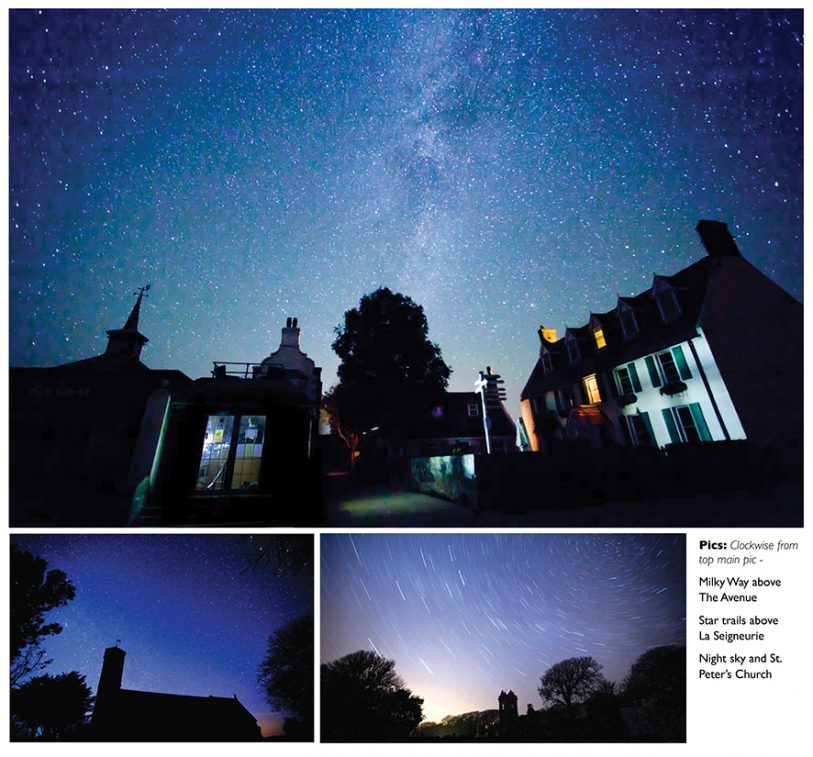 For more information on the Isle of Sark visit: www.sark.co.uk

Travel from Portsmouth to Guernsey by Condor Ferries:

Travel from Guernsey to Sark: www.sarkshippingcompany.com