FINCHER PAINTS AN UNNERVING TALE OF DEJECTED LOVE AND GIVES A NEW, DISTURBING MEANING TO THE SANCTITY OF MARRIAGE 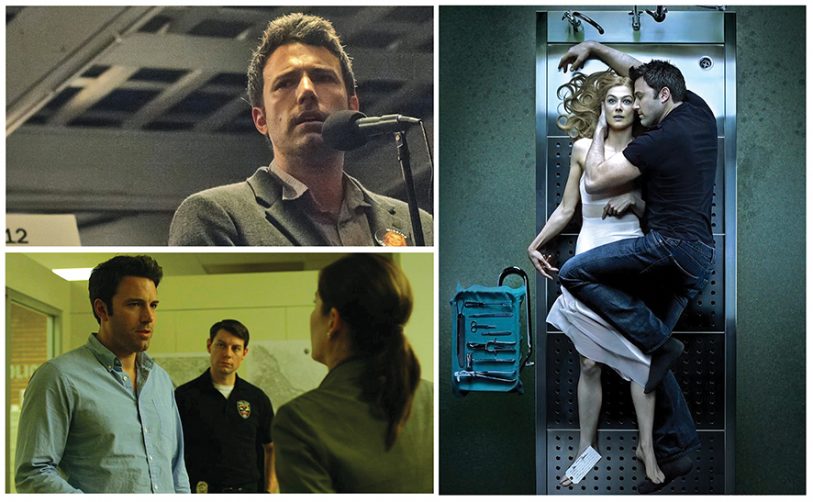 In Gone Girl, journalist Nick Dunne (Ben Affleck) discovers that his wife Amy (Rosamund Pike), also a journalist, has disappeared on the morning of their fifth wedding anniversary. He soon becomes the centre of media attention when the initial sympathy from the public for him turns into accusation of murder. Nick is eventually forced to clear his name from this unusual case through the help of high profile criminal defence attorney Tanner Bolt (Tyler Perry). This decision, together with his recent confession of infidelity and ambiguous behaviour, makes Nick appear disingenuous. However, we soon discover that all is not as it seems with Amy’s disappearance.

Gone Girl has been adapted from Gillian Flynn’s best-selling unconventional thriller (Flynn also wrote the film’s screenplay). I had no knowledge of this novel prior to the movie’s release but I understand that the film is largely faithful to its source. Not having read the book also worked in my favour, as I was unaware of any approaching plot twists and had no expectations. Every scene in this dark tale is replete with clues and rich in symbolism that keeps the audience guessing until the very end. For example, there is a poetic scene that occurs in flashback – the film’s main plot of Amy’s disappearance is interjected with extracts from her diary entries that record the timeline of their relationship – as Amy recounts their first meeting at a party. When Nick whisks her away to the romantic streets of New York, they pass the back entrance of a bakery in which he shows her the “sugar cloud” created as a result of the delivery of powdered sugar. The dusting of sugar lands on both characters, including on Amy’s lips, which Nick proceeds to wipe off so they can share their first kiss.

This noir-esque scene, with the chiaroscuro lighting and urban location, is loaded with metaphorical meaning: the wiping of sugar, a symbol of wealth and power, suggests Nick’s desire for Amy to remove the shackles of the societal constraints placed upon her by her wealthy parents; the sugar also refers to Amy’s requirement to maintain her ‘good girl’, Harvard-grad image for those around her. Nick’s dominant position in this scene indicates the struggles Amy will face living up to her husband’s expectations. In addition, the sugar powder in this scene has the same look and texture of snow, a symbol of death with its associations with winter. But what death does this foreshadow? Is it the literal death of a person, or a metaphorical one of their relationship? These questions continue to accumulate as the film progresses, coming to a crescendo with an unexpected development, a development I shall not reveal as doing so would be a crime in itself.

Gone Girl clocks up a running time of 145 minutes but, at no point, loses your attention. This is due not only to the thrilling peripeteias, but also to its clever and in-depth examination of the inadequacy of mental recollection, the challenging of the bourgeois idea of ever-lasting love, and exploration of the Mulveian idea of the ‘male gaze’, the concept that women are expected to achieve physical perfection in order to become desirable by men. At the same time the audience is also shown the unreliability of to-day’s media through Nick’s distorted portrayal by local newsrooms; the official posters for the movie hint at this theme which features the visual effect of video distortion around Ben Affleck’s character.

Affleck has managed to completely turn his career around in recent years (both as an actor and a director) with critically acclaimed films such as Gone Baby Gone (2007), The Town (2010), and Argo (2012). However, his portrayal as the alluring yet mysterious protagonist was, at times, so wooden you could make a table out of it. Saying this, leading lady Rosamund Pike is simply mesmerising as the complex Amy and has proved herself to be a compelling actress. Together, the two actors blend harmoniously, and ingeniously change the audience’s perception of them as the film progresses.

A great film of its genre and potential Oscar contender.

THINK LORD OF THE FLIES, BUT IN A MAZE 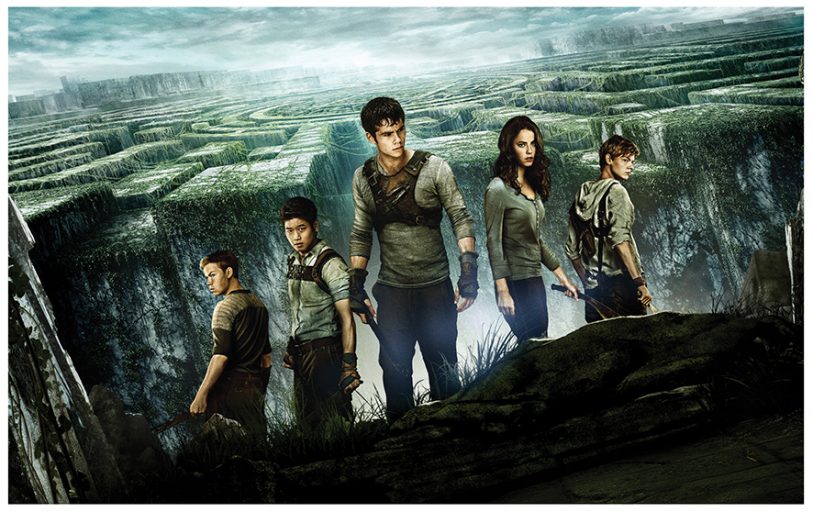 With the success of recent book-to-film adaptations of young-adult, dystopian novels such as The Hunger Games and Divergent, it is no surprise that James Dashner’s 2009 The Maze Runner has followed in this growing trend. However, unlike the first two films, The Maze Runner will take you on a dizzying journey towards disappointment and regret.

Thomas (Dylan O’Brien) awakes to find himself being transported to a vast, rural space referred to as the Glade. Surrounding this land are imposing, grey walls that constitute an impassable maze. With no recollection of who he is and how he came to arrive in the Glade, Thomas is immediately confronted by its inhabitants: a group of young boys. He soon discovers that, through the group’s leader Alby (Aml Ameen), every month a new boy of roughly of the same age is thrown into this world with no memory of their life prior to entering the Glade. In the meantime, the boys are provided with food, tools, shelter and cattle, but no clues on how to escape the maze. Only a select few (known as the Runners) are allowed to enter the maze each day in an attempt to uncover its labyrinth structure.

From the onset, Thomas is determined to become a Runner, and eventually breaks the rules by entering the maze without permission. But with his arrival, the status quo is disrupted; for the first time in three years, a girl (Kaya Scodelario) is sent into the Glade with a note informing the group that she will be the last. In the meantime, the boys soon learn that whoever has placed them in the Glade is determined to disturb the tranquil community they have created.

The film desperately tries to emulate certain elements from William Golding’s The Lord of the Flies, but instead produces pseudo-philosophy through poorly executed scenes and abysmal acting. For example, the Gladers are a clear analogy to the human state of existence and the un-certainty surrounding our beginnings on Earth. In addition, Thomas’ rebellious action in entering the maze pre-empts a state of anarchy and chaos within the community.

Gally (Will Poulter), a member of the Gladers and the film’s antagonist, supports the continuation of living under the totalitarian regime forced upon them by the labyrinth’s architects. Gally’s reasoning is that any form of resistance would disrupt the boys’ ability to continue to live under the pretence of their peaceful society. It is here that the film has potential with its modern take on Plato’s Allegory of the Cave, but instead ends up feeling like a trailer for the next two instalments of this series. Ultimately, the integrity of this film has been sacrificed for the studio’s desire to profit from the franchise trend so popular today.

With the amount of ridiculous scenes mounting as the movie progressed and plot holes so big you could fall into them, I was eagerly anticipating the closing credits. What I found most far-fetched about this film was the remarkable ability of the Runners to keep their hair so perfectly styled even after being chased by the blood sucking, robotic slug monsters known as the Grievers. Perhaps the only re-deeming factor of The Maze Runner is the absence of a clichéd romantic arc. Whilst The Hunger Games and Divergent both have female leads that develop relation-ships with the opposite sex, this film seems to be one aimed more at young boys.

The Maze Runner deals with a group of youngsters desperately searching for an exit out of their nightmarish world and, after watching this dreadful film, you’ll find yourself doing the same thing.