WE HAVE BIRD OF THE MONTH AND UPDATES ON FURRIES BY GERAINT JONES OUR LOCAL VET, CATS PROTECTION KEEP US INFORMED OF CATS AND KITTENS LOOKING FOR NEW HOMES BUT

WE DIDN’T EXPECT TO BE HIGHLIGHTING A CRUSTACEAN IN 2015. 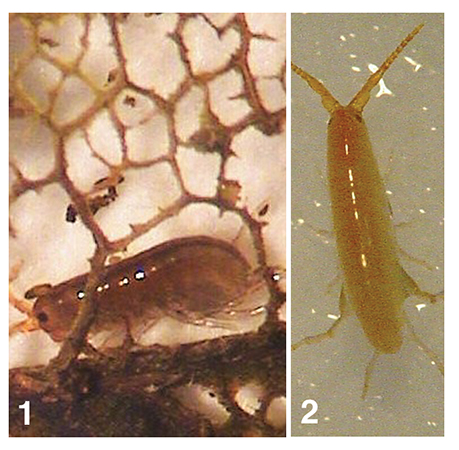 Dr Isabella Brey is a zoologist who has a soft spot for landhoppers, which were the subject of her PhD Thesis.

If you are one of the gardeners who are greeted by a flock of bouncing, shiny brown, Rice Crispie sized creatures every time you move a plant pot or sack of compost in your garden, you are not alone.

More and more Swansea residents are starting to encounter landhoppers, or more specifically the landhopper Arcitalitrus dorrieni, right outside their back doors. All landhopper species originate in the Southern hemisphere, and this particular species is native to mid-eastern Australia. It was introduced to the UK accidentally during the Victorian era when large numbers of tropical plants were imported to stock botanical collections. Over time, the little stowaways have become hardier and are now able to survive winters outside the shelter of greenhouses in the milder areas of the country.

Landhoppers are crustaceans, and as such belong to the same group of animals as the more familiar crabs, shrimp and woodlice. Their closest relatives in the UK are sandhoppers which are frequently encountered in seaweed on the beach at low tide, but which are unable to survive for very long away from the sea.

Landhoppers, on the other hand, have become completely independent of water bodies for their survival and reproduction. Similar to our native terrestrial crustaceans, the woodlice, they do, however, still use gills to breathe and as a result they are prone to dehydration. This confines them to habitats with relatively high humidity, such as deep leaf litter, soft soil and compost heaps.

For the same reason, they are nocturnal and are most active on the surface on calm, damp nights. This nocturnal behaviour also provides them with some protection from predators, because a wide range of native animals including spiders, ground beetles, toads and songbirds readily feed on landhoppers when they manage to catch them. In contrast to woodlice, landhoppers do not possess a tough protective body covering or, for that matter, any other defence mechanisms besides their random jumping display, which is usually followed by playing dead. They do not use any of their seven pairs of legs to jump, but instead leap by rapidly uncurling their abdomen, which is normally carried tucked tightly under the body. The initial vigorous display is designed to startle and confuse predators, making them lose track of their prey, while the death feigning aims to hide the landhoppers in their new locations.

Landhoppers feed exclusively on dead leaves and other decaying plant material, so gardeners need not worry if they encounter them in their gardens, greenhouses or on their allotments. Photo 1 shows a landhopper alongside a latticework of leaf veins produced by the animal after prolonged feeding on this particular leaf (under laboratory conditions).

Female landhoppers care for their eggs and newly hatched young by carrying them in a special fluid-filled pouch under-neath their bodies. Most young landhoppers are released during the summer months, and look like slightly lighter coloured miniature adults. Photo 2 shows a recently released young landhopper.

Those youngsters lucky enough to escape predators and other dangers will reach breeding size by the following spring and may live as long as 22 months.

The first episode of Iolo’s Great Welsh Parks series broadcast on BBC One Wales featured some excellent close-up and slow-motion video footage of the landhoppers in Singleton Botanical Gardens. They have been established here for some considerable time and it is thought to be the origin of many of the naturalised populations around Swansea.