The Rainbow and the Covenant—Are we all Charlie?

This month Father Andrew Pearce – Rector at St Teilo’s Church, Bishopston – examines the lessons to be learned by all of us of every faith, creed or colour from the horrific events in Paris last month 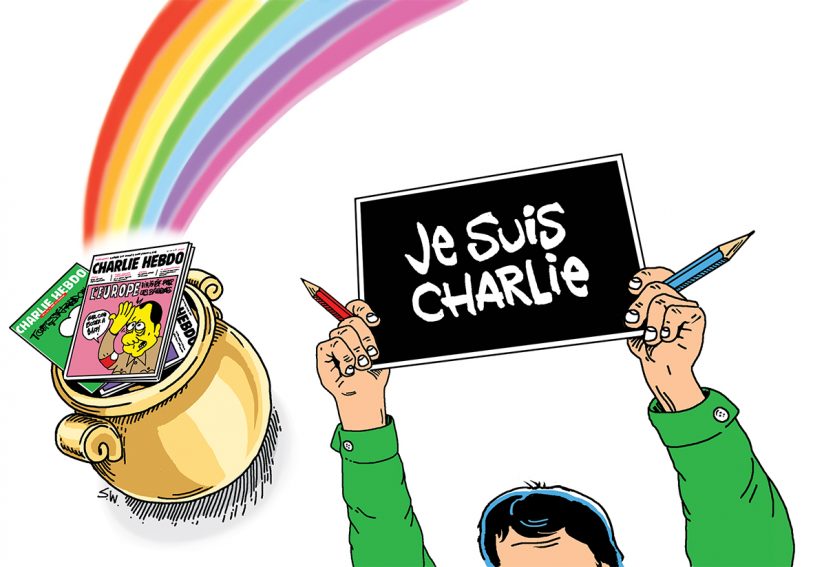 A Happy New Year to you all!

A few weeks ago, I had the privilege of joining our local Methodist Church for their Covenant Service, which is a form of worship particular to Methodism. Having been raised as a Methodist, I was first introduced to the Covenant Service as a teenager, and attending this beautiful service at the start of the New Year was an important part of my spiritual formation in those important years of deepening personal faith. Even as an Anglican, I have attended the Covenant Service on occasion – but this year is the first time I have had the honour of preaching at such a service.

So, what exactly is the Covenant Service? Well, put simply, it’s a service in which Christians are invited to renew their covenant relationship with God. The Hebrew word berith (which is usually translated as ‘covenant’ in English) appears no less than 264 times in the Old Testament – so it’s clearly an important word. It’s used to describe the formal alliance or agreement that God makes with his people. The concept of covenant is a key theological notion in Scripture, and is crucial (albeit in somewhat different ways) to all three Abrahamic faiths: Judaism, Christianity and Islam.

For Jews, the covenant was established by God with Abraham, the first of the patriarchs, the father of Isaac and the grandsire of all Jews, and sealed (for males) by the outward sign of circumcision. Muslims too believe in the covenant with Abraham; and every Muslim (not just those Arabs who are physical descendants of Abraham, via his other son Ishmael) who confesses to a faith in Allah is believed to be a partaker within this covenant.

Once again, the outward sign of the covenant is circumcision.

Christians believe that in Jesus Christ, a new covenant was established by which salvation was offered not to a chosen nation, but to the whole human race. This covenant, for Christians, is sealed by Christ’s sacrifice on the Cross, and is confirmed through the faithful receipt of the sacraments of Holy Baptism and Holy Communion.

Clearly, there are differences between Jews, Muslims and Christians in their understanding of the covenant relationship with God; but all three faiths agree in looking back to a time prior to Abraham for the establishment of the very first covenant between God and humanity. This is the covenant that God made with Noah, following the great flood: God’s solemn undertaking never to repeat that cataclysm, a promise that was sealed by the outward sign of the rainbow. The rainbow, according to the Genesis story, was under-stood to be the war-bow of God: by putting it in the sky, God is, in effect, offering a truce with humanity. Never again will the Creator wage war against his creation.

As well as being a sign for peace, the many-hued rainbow can also be understood as a represent-ation of difference and diversity: and this makes it an even more potent symbol for God’s covenant with the whole human race. Whatever our con-trasts of belief, colour, language, ethnicity, gender or sexuality, we are one humanity: just as the visible light of the spectrum of the rainbow, in spite its varied hues, is really all one light, merely refracted in diverse ways along different wave lengths.

And, of course, the variety is really far greater than any eye can perceive: just because humans cannot see into theinfrared or ultraviolet extremes of the spectrum, it does not mean that they are not there: and there is more multiplicity in the human race, and indeed in the whole of God’s creation, than any of us can even conceive.

In the preface to the Covenant Service in the Methodist Worship Book, the following important words are to be found: ‘The covenant is not just a one-to-one transaction between individuals and God, but the act of the whole faith community. The prayers of intercession which follow emphasise our unity with all humanity.’

The day that I preached at the Covenant Service this year was the same day on which three million French citizens took to the streets to proclaim their solidarity and their unity following the horrific terrorist attacks in Paris just a few days earlier.

The murder of seventeen individuals, ten members of staff at the offices of the satirical magazine Charlie Hebdo, three police-officers (one a Muslim), and four members of the Jewish community – represent the most blatant and barbaric attack on liberté: one of the founding ideals of the French Republic, and a core value of Western democracies.

Was Charlie Hebdo wise to publish cartoons that were offensive to Muslim sensibilities? Probably not: but the role of a satirical magazine is not to be wise, or cautious, or polite. It is to be honest, to challenge, to provoke, and to hold up a mirror to society – for, in George Orwell’s words, ‘If liberty means anything at all, it means the right to tell people what they do not want to hear.’

As the crowds gathered on the streets of Paris, there were many moving images which provided a powerful counter-point to the bloodshed and mayhem of few days before. At the most fundamental level, there was the sheer size of the mass of people; and the sight of many other flags been waved besides the French tricolour, reinforcing that sense that the whole world was united in revulsion and rejection of the terrorists.

Then there were the leaders of so many countries, marching together arm in arm – and the spectacle of Francois Hollande and Angela Merkel, side by side, doing what their warring predecessors were incapable of doing a hundred years ago was yet another poignant reminder of just how far Europe has progressed, after the destructive conflicts of the twentieth century.

But, for me, the most moving sight of all was the families of the fallen victims of terror, united in their grief, gathered together at the front of the march. Jews, Muslims, secularists and, I imagine, at least some with Christian faith: each bearing a profoundly personal loss, yet each shouldering the burden of those losses with one another, and with the whole nation – regardless of creed or conviction.

For a moment, all taking part in that march, and all of us watching at home, were able to say, without sounding trite or banal, Je suis Charlie. And few days later, the new edition of the magazine (with its highest-ever print-run), was quite unapologetic in depicting a tearful prophet Mohammed on the front cover, proclaiming himself a Charlie too.

Whether Muslims are right to be offended by such a depiction of Mohammed is not something on which I, as a non-Muslim, feel at all qualified to offer a view. Very many will be deeply offended: but perhaps not all. But should Christians be offended if Jesus were to be depicted in a cartoon saying ‘Je suis Charlie?’ I would say categorically not. For Christians, the message of the Incarnation is that God chose to become one of us, to laugh with us, to weep with us – to become, in other words, a right Charlie.

Many tears have been shed in France over the past few weeks. But after the rain, the promise of sunshine remains. The rainbow that God laid aside will appear again – the promise that God makes in his covenant relationship with the whole human race. No matter how often we break our covenant with God, he never breaks it with us. Remember that, next time you see the rainbow.