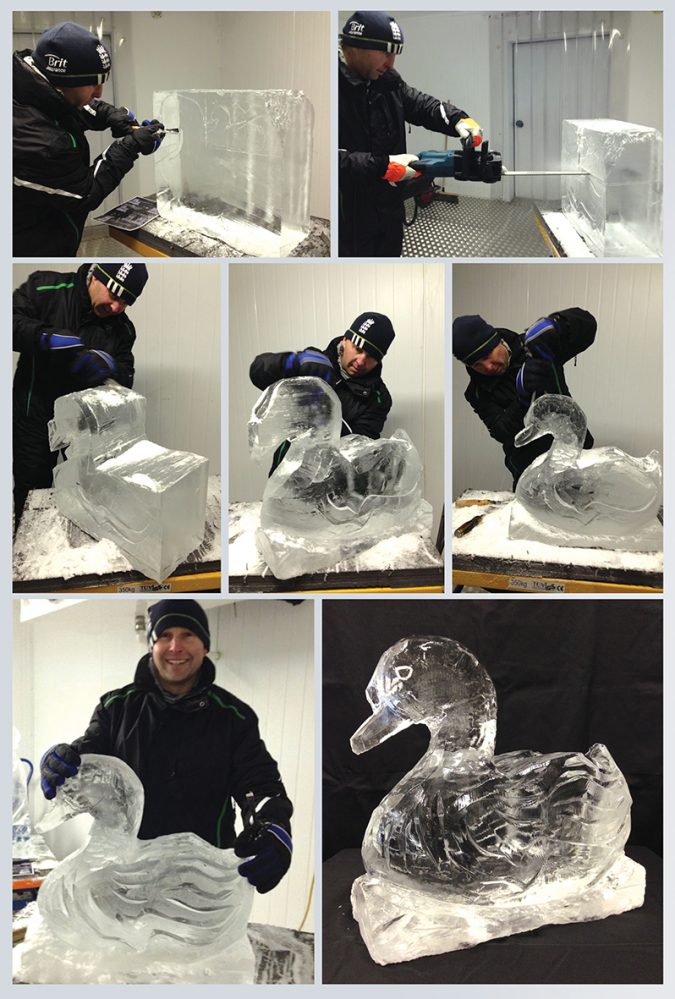 An unassuming industrial unit in Cwmbran might not be the most exciting location, but artworks created in it have been seen by millions and have been centre stage at weddings, parties and product launches across Wales and England.

Husband and wife team Laura and Gareth Giles launched The Ice Academy in summer 2012, working from a deep freeze brought from Rochdale purchased on Ebay.

Since then their sculptures have adorned celebrations at Swansea’s newest nightclub Fiction and Myu, the Towers Hotel, the John Lewis Christmas meal and an eighteenth birthday party in Cheshire.

Their ice creations have been seen by millions of BBC viewers: Ospreys, Scarlets, Dragons and Blues crests on Scrum V, the Premier League trophy on Football Focus and instruments used to play In the Bleak Midwinter on BBC’s The One Show.

Laura suggests a swan for Swansea’s

TheBAY Magazine and, as importantly, believes in my ability to sculpt one.

Working on a 70-litre ice block at -8°C (clothes and gloves keep students warm,) I use a chain saw (as fun as it sounds!) and an ice pick to arrive at a swan’s rough outline.

Paring of the block with chisels is an absorbing process, the ice proving surprisingly soft as flakes fly off. Little effort (and no hammer) is needed to form a shape (others have made penguins and love hearts) and with Laura’s encouragement, guidance and praise I am soon going along as swimmingly as the bird I hope to make.

During a break for tea and biscuits the couple tell me of their business’s ups and downs (Gareth broke their first van’s engine when driving through a flood, while a stand at an unpromising wedding fair led to a lucrative corporate client) before we resume.

As more ice is pared away the swan becomes more lifelike but also nears the stage when overzealousness could see the head sliced off. Thankfully, my sculpting skills are developing (anyone who did woodwork at school should find the paring familiar) and some deft strokes bring the bird to life.

To add neatness, Laura steps in with an angle grinder and it’s snow time! During my lesson around half of the block’s mass is removed and Gareth is regularly on hand to sweep the floor, adding a slightly surreal barbershop feel to proceedings.

Laura tells me of the popularity of the lessons with hen parties and of Ystrad Mynach College students and even an oilrig worker recently enjoying tasters.

My bird almost complete, Laura asks me to carve some curved feathers along its wings and I immediately think of the Swansea City emblem.

Laura seems genuinely impressed by my work; I am absolutely buzzing at what I have created and take away a massive sense of achievement, if not the sculpture itself – I’m not sure if swans are allowed on trains…