Liam’s featured car this month is the Citroen Cactus. Liam usually waits for us to come up with a song title or witty intro each month – I’m afraid that the Cactus has had us stumped. Save for what sort of prick-ly genius came up with a name like this?

Citroen: A car manufacturer that, when it comes to design, has never been afraid to think out of the four-wheeled box. They’re the people who brought you the Traction Avant, the automotive icon that was the original DS, the H-Van, and probably most famously of all, the 2CV. Idiosyncratic just doesn’t do them justice 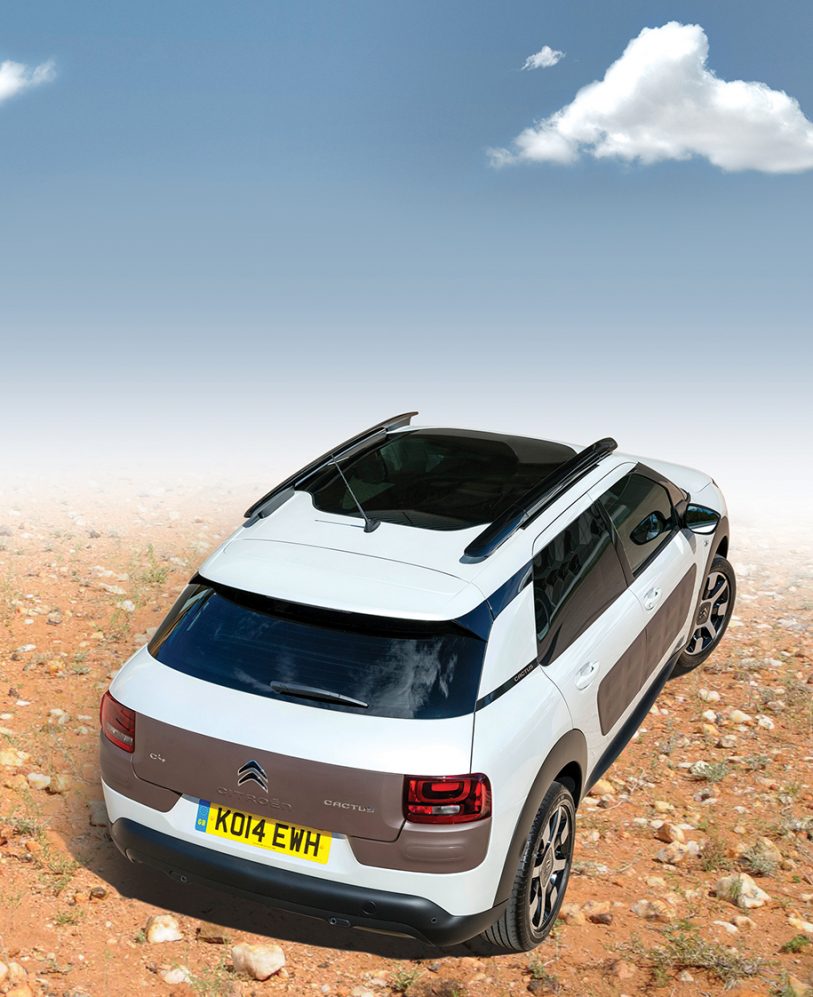 More recently though under parent company Peugeot, Citroens have been, let’s say, a little lack-lustre; their offerings, little more than restyled 308s and such-like. That distinctive “Je ne sais quoi” that made them so revered by the faithful has been well and truly missing; their motoring mojo seemingly lost.

One look at the new Citroen Cactus however, is all it takes to know it’s been well and truly re-discovered. The Cactus is a car like no other. Size-wise it’s similar in stature to a cross-over or one of the smaller SUVs that are so often seen on the school-run. Yet it lacks the weight. It sits higher than a conventional hatchback and it’s roomier and more practical too. Yet starting at £12,990 it’s priced to compete alongside them.

Outside it’s covered in “Airbumps”, rubberised chocolate block-like side panels that protect the paintwork from the day-to-day knocks and scrapes that go hand-in–hand with family orientated transport. They give the impression that the Cactus has been armour plated, but in certain guises, the Cactus weighs-in at under a tonne. Perhaps they’re actually bubble-wrap?

That light weight – to which an extensive use of aluminium is key, – allows the Cactus to utilise smaller engines. As a result it’s lighter on fuel, and it feels lighter on its feet (oh ok, wheels) too. It also emits fewer nasty gases. Even the windscreen washers have been designed to be more efficient.

A smaller, and therefore lighter, bottle is all that’s needed.

Inside, further weight saving features include hinged, pop-out rear windows rather than wind-down ones, a thermally insulated full-length panoramic sunroof that removes the need for a heavy separate blind, and a one piece folding rear seat, no 60:40 splits to be found here.

Then there’s the dashboard, probably the Cactus’s most defining internal feature. There are no dials and the passenger airbag is mounted in the roof! A large central touch screen takes care of all of the controls for the air-con, navigation, entertainment, Bluetooth and the trip computer – it also displays the view from the rear-view camera, – while another smaller tablet-like display in front of the driver displays the speed.

It makes for a well equipped, virtually button and clutter free environment, the only downside being having to swipe out of one screen and into another in order to turn the heating up.

Still, at least the slightly seventies-looking faux leather door handle and glove-box straps are attractive, plus that “Airbump” motif is carried over onto the upholstery on the seats, which despite appearing a touch flat prove to be surprisingly comfy. 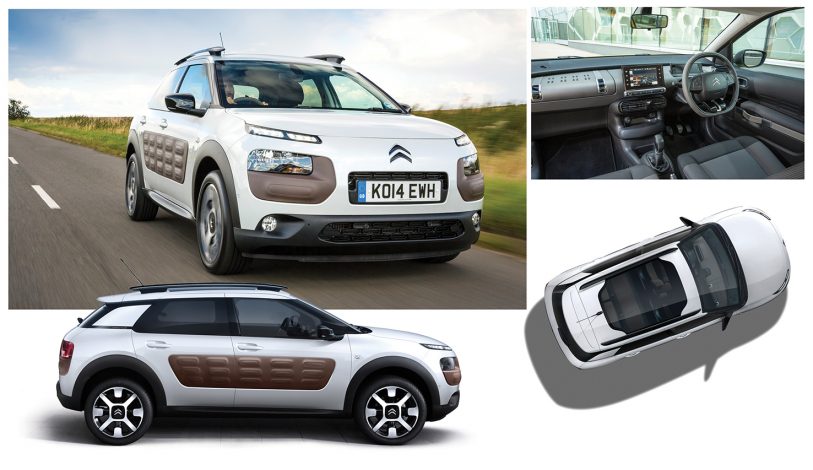 If the overall design is unusual, then the driver experience is anything but. You sit upright, slightly elevated and long-armed as there’s no reach adjustment for the steering, the view of the road ahead is near panoramic. The ride is supple, the performance adequate, the steering light, and the gear-change… well, that feels almost as rubbery as those “Airbumps”. But the Cactus is a Citroen after all, what exactly did you expect?

Citroen’s latest is as quirky as the best of them. The Cactus is a very welcome return to form.