LIZ has a bucket list of places that she wants to visit. This year she ticked another one off her list – Machu Picchu in Peru. 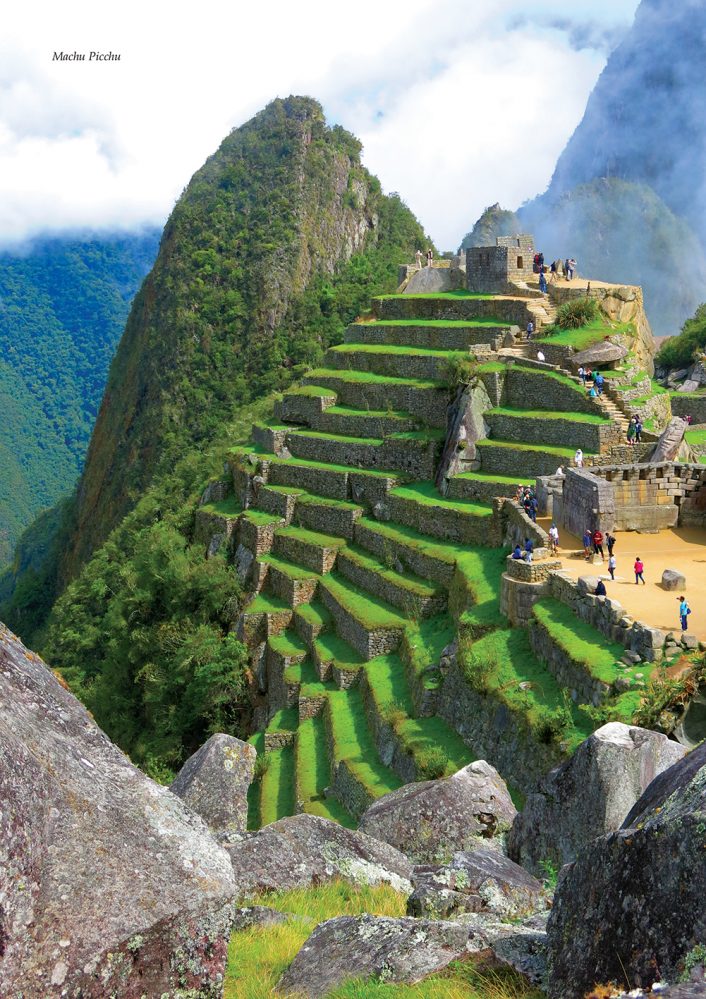 Cusco (pic below) at 11,145 feet (3,400m), above sea level is one of the highest cities in the world. It sits at the gateway to the Sacred Valley, a place where visitors come to spend a few days acclimatising to the altitude before heading off to discover the Lost City of Machu Picchu.

Machu Picchu (pictured left opposite page) is an Inca site thought to have been built in the 15th Century for Emperor Pachacuti. It was abandoned by the Incas around 1572 and was discovered in 1911 by Hiram Bingham III, a professor at Yale University.

From the balcony of my hotel, which was situated in an elevated position in the artisan quarter of San Blas, I looked across the city and to the square below where the red towers of the Cusco Cathedral soared (pic top right).

After two days in Cusco I began my journey through the Sacred Valley with an early morning stop at the local market in Pisac (pics left opposite page). Colourful stalls sold silver jewellery, hand crafted Llama charms and intricately designed necklaces and rings decorated with shells and stones. Bowler hatted ladies sold beautiful textiles fashioned into scarves and bags. Alpaca rugs hung from stalls and miniature landscapes depicting cacti, llamas and mountain ranges were skilfully painted onto cards, canvas and – fridge magnets! For those wanting to replicate the sound of the Andes there were wooden Pan pipes on sale. 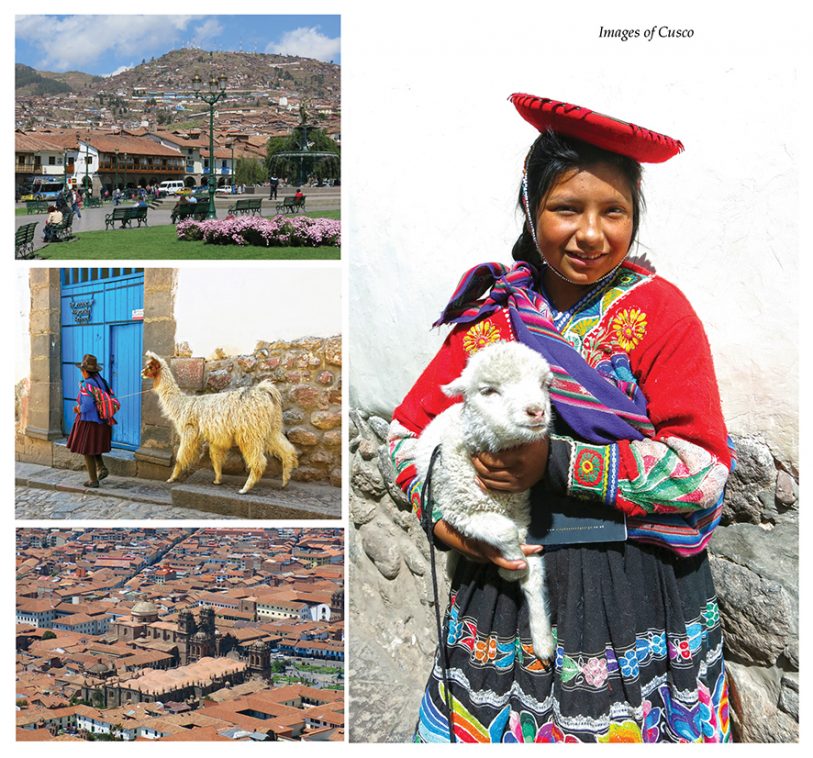 As I drove out of town an old man sat by the road side; a grey felt bowler hat perched on top of a woollen knitted hat (pic right). He was selling cocoa leaves to passing tourists in need of a cure for Soroiche or mountain sickness. The leaf is chewed or made into tea to ward off the effects of high altitude and is legally used in Peru.

The Urubamba River was my constant companion as I travelled down into the valley and through the dusty brown streets into Ollantaytambo (pic above), a village that sits at the base of the towering mountains. This village had been known to me for many years, as I had come across a black and white photography book in a New York bookstore and became fascinated by the lives of its inhabitants through its images.

I watched old ladies with plaits down their backs; (pic right) aprons over cardigans and woolly tights showing beneath layers of skirt, shopping bags in hand crossing the square on their way to the market. Mountains of chillies and red peppers, dark black corn, deep purple potatoes, slices of orange fleshed pumpkins spilled out of baskets. Buckets filled with red roses, and pink and orange gladioli stood amongst stalls of butchered meat and mounds of fresh green herbs and spices.

Sitting on wooden benches and stone steps around the square, villagers waited for the white combi buses to take them back to outlying hamlets. As you travel across Peru, the style of local dress changes. Here men wore straw hats with a red scarf and ponchos woven with intricate designs. Many of the ladies dressed in beautiful red felt hats with silk flowers on top, worn at a jaunty angle and held in place with a white embroidered strap fastened beneath their chin.

I wandered down dark narrow passageways which led through to bright floral courtyards, and watched as women sat preparing vegetables, clucking chickens scratching around in the earth at their feet, below lines of washing hung out to dry. A trio of barefoot little girls played in one of the water channels, that course through the town; their cries of happiness mingling with the sound of running water as they chased a tiny grey and white puppy through the streets. 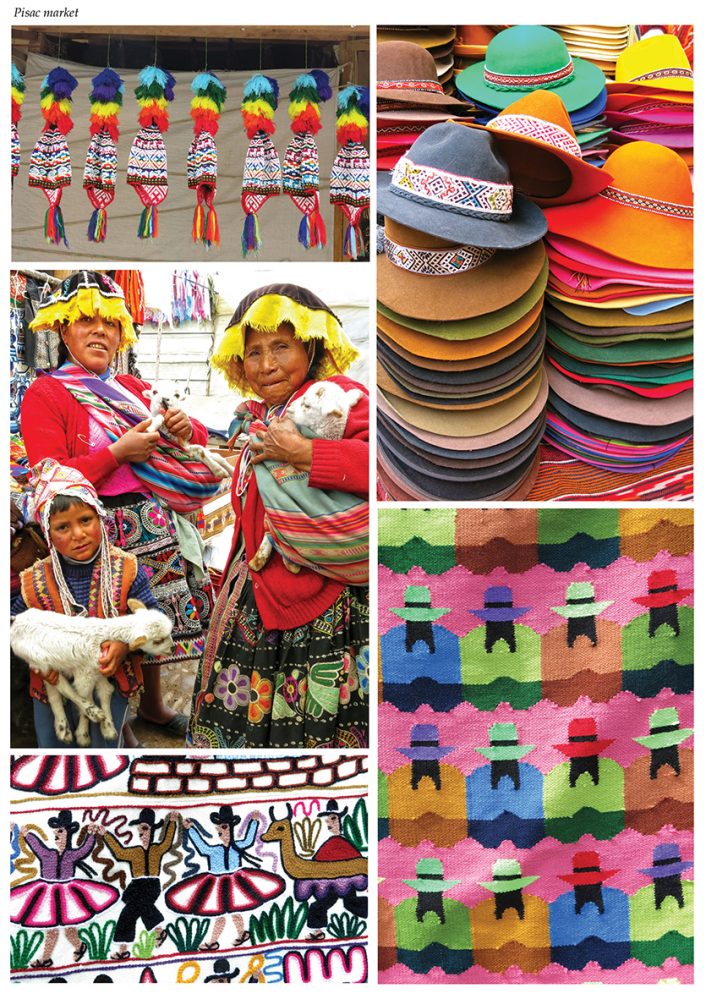 The railway line passes the outskirts of the town of Ollantaytambo, taking visitors to Agus Caliente also known as Machu Picchu Pueblo the nearest town to the historical site. It’s a small settlement that has developed around the railway, and has hotels and restaurants to cater for the many visitors.

I had set my alarm for 4am, to give me just enough time for a quick cup of coffee in Agus Caliente, before catching the visitor’s bus that would take me along the switch-back mountain roads, through dense jungle, up to Machu Picchu.

As I stepped off the bus my heart sank. The morning was rather damp and foggy – after coming all this way would I even get a glimpse of Machu Picchu? 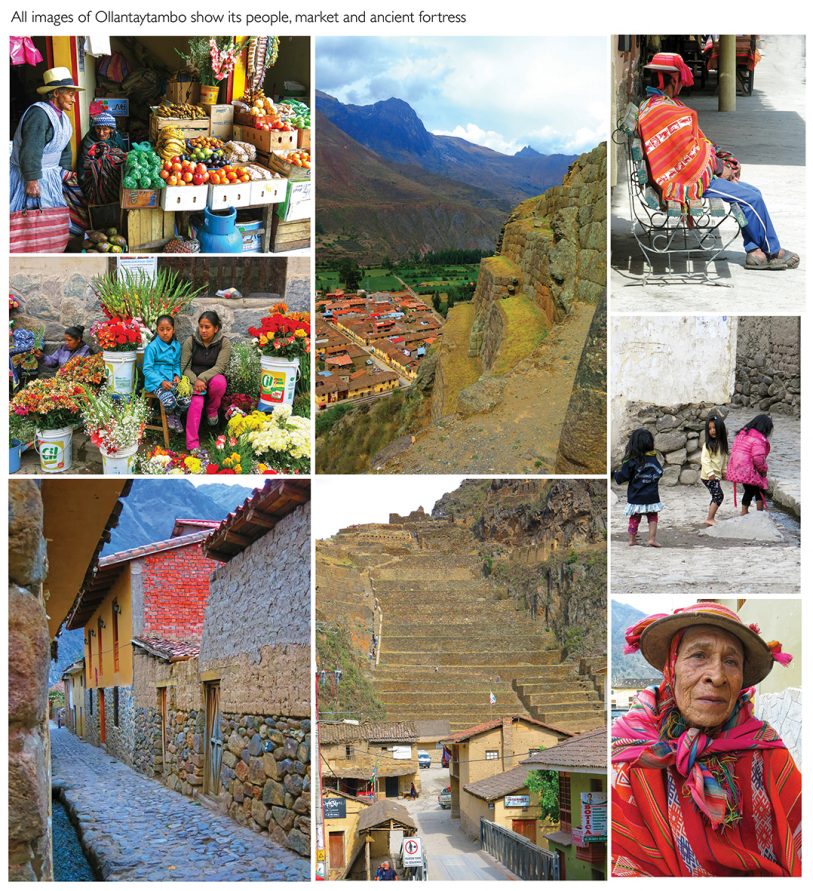 I climbed the steep stone steps, slippery and glistening from the soft rain. The clouds swathed the mountain tops around and below. The weather teased and merely showed me a fuzzy outline of grey terraces.  As I scrambled higher the rain ceased, white clouds parted and blue sky materialized and before me the ancient site of Machu Picchu was revealed. It was breath-taking.

Hundreds of terraces interspersed between narrow grey stone streets and ruins, which were once homes and store houses, stretched across a flat green plateau. A single tree has been left standing to show how high the vegetation was at the time when Hiram Bingham made his discovery. 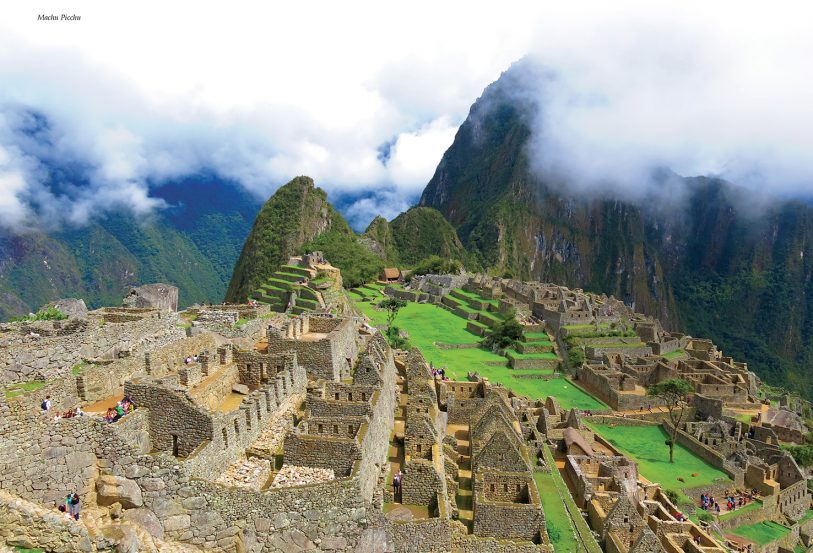 It is thought that around 1000 people originally inhabited the site, with homes, temples, plazas and palaces. It may have been built as a ceremonial site, a military stronghold, or a retreat for the rulers. To-day renovation work is being carried out, dwellings and grain stores are being thatched giving more of an in-depth picture of how the site originally looked.

High above the Urubamba Valley at 7,972 feet (2,429m) above sea level, on a hilltop in the Andean mountain range, hidden in the depths of jungle so far away from any civilisation, the mysterious lost city sits in isolation. It couldn’t have been easy for the Incas to build in such a remote location. It is a remarkable a feat of architecture, as when it was built over 500 years ago, the Incas had no iron, steel or wheels. It is amazing to uncover a citadel of cut stone fixed together without mortar so tight that its cracks still can’t be penetrated by a knife blade.

Shrouded in mysteries still unresolved, Machu Picchu was never destroyed as other sites were by the invading Spanish Conquistadors.

Consequently a remarkable legacy remains intact and the Lost City reveals an insight into the Inca Empire. 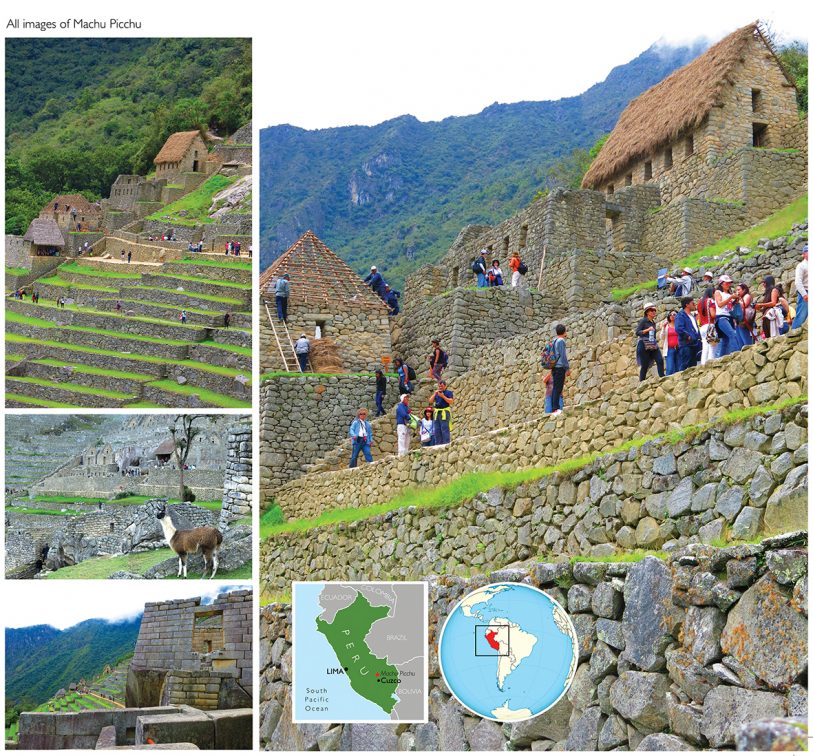 Tickets to Machu Picchu can be bought online @ www.ticketmachupicchu.com