How do you react when you encounter the ‘Big Issue’ seller on the street? 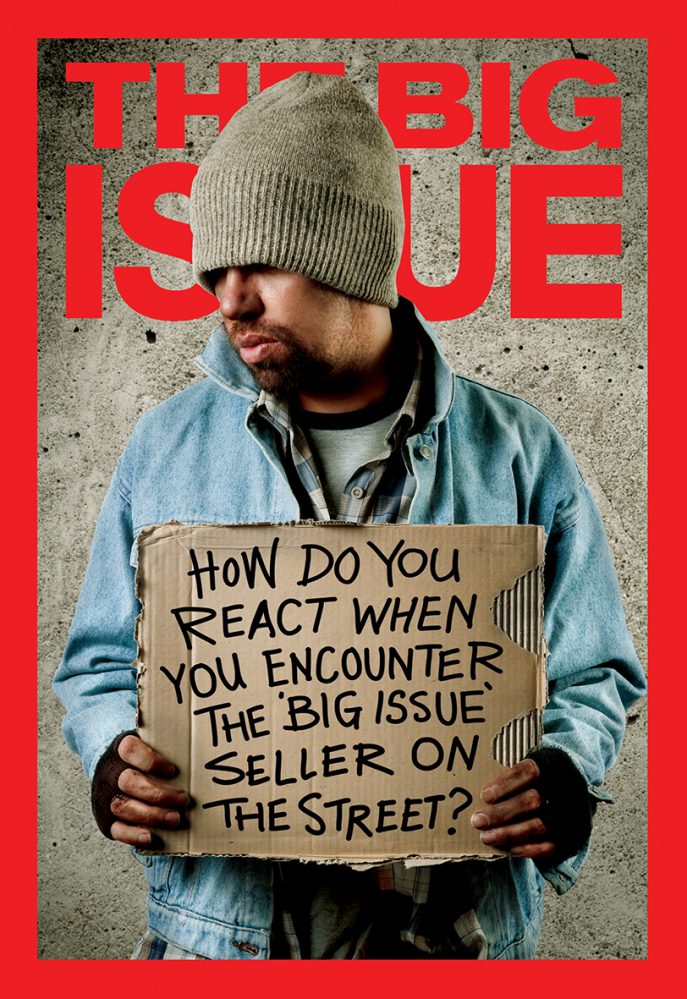 Regrettably, if you’re anything like me, it probably depends on what kind of mood you’re in; whether or not you’re in a hurry; or, even, most shamefully, what the particular vendor looks like. In a split second, you eye up the person standing near the doorway of the place you’re about to enter or exit, and you make a snap judgement. Does the way they cry out ‘Big Issue’ carry the right tone of voice – inviting without being too pleading, pleading without being too pushy? Does the vendor seem respectable enough, or do they appear too disreputable? Have they got a mangy-looking dog with them? Are they a man or a woman? Are they in their twenties or their fifties? Do they look like they ‘deserve’ to be homeless? Or do they look a bit too uncomfortably similar to ourselves (‘there but for the grace of God go I’)?

The ‘Big Issue’ is a worthwhile cause; it’s a decent read; and yet, I’m rather inconsistent in my approach to it, and its sellers. There’s no particular rhyme or reason to this; and, in my heart of hearts, I know I could, and should, do better.

Shelter Cymru estimates that at least 50,000 people in Wales face the experience of homelessness each year. Wales also has the worst housing conditions of any of the four nations of the United Kingdom, with an estimated 225,000 people – one in twelve of the Welsh population – living in unfit housing. Considering the high standing of the UK in economic league tables, it’s truly shocking that homelessness and housing issues should remain such an acute cause for concern.

Yet when I was a child, I don’t think I ever thought much about homelessness. I remember that we had a rusting table-frame in our back garden which, in the summer, my sister and I would cover with blankets, held together by clothes pegs, and secured at the four corners by bricks. By such means we had produced a make-shift tent, which afforded us hours of amusement during the languid summers of childhood. But I had no real appreciation at the time that we were unconsciously echoing one of the great festivals of ancient Israel.

The Feast of Tabernacles, or ‘Booths’, is one of the three great festivals that were kept in Jesus’ day by observant Jews (the other two being Passover and Pentecost). St John is the only one of the four Gospel-writers to mention this festival, but its importance is undeniable, and it is still widely-observed in Jewish communities today.

The Tabernacles that give the feast its name were makeshift shelters, made out of whatever came to hand, and set up in a porch or a back yard (rather like my childhood tent). They were often used for meals, or for sleeping – and they reminded the Jews of their ancestors’ sojourning in tents on their travels through the wilderness of Sinai.

In chapter 7 of St John’s Gospel, as Jesus travelled to Jerusalem for the Feast of Tabernacles, Jesus faced the pain of rejection as the people and the religious leaders hotly debated his identity. Whilst there are some who were ready to accept his credentials, and who recognised the God-given authority of his teaching and miracle-working, there were many others who considered him a charlatan, or even a demon-possessed fraud. Even at this relatively early stage in his ministry, some of his opponents sought to arrest him; and some already wanted to kill him. But perhaps the harshest rejection that Jesus faced at this point came from those who should have been closest to him. Jesus’ brothers, we’re told, had a hard time believing in him. Some of them would later become leaders of the church, and would write words of encouragement to their fellow Christians that would eventually become a part of the canon of Holy Scripture – the letters of James and Jude. But all this was in the future. For several years, the gospel accounts suggest, Jesus’ closest kinsmen were deeply embarrassed by him. Only after Jesus’ death and resurrection did they finally come to faith.

It’s ironic that the hostility towards Jesus should have become more acute in the midst of the Festival of Tabernacles. This Festival should have served to unite the Jewish people, in remembrance of the time when they were all outcasts and wanderers, not divide them. And yet there is no real joy in living the precarious lifestyle of the tented outcast. It bears no resemblance to the tent-making games of my childhood, the camping holidays that many of us still enjoy, or even the ceremonial re-enacting of Israel’s wilderness wanderings as performed at the Feast of Tabernacles.

Many of those who live on our streets today do so because they have faced rejection, misunderstanding or even violence on the part of their families. Sometimes their own lifestyles, personal behaviour, health problems or tendencies toward addiction of one kind or alone have been contributory factors – but it’s the lack of a loving support network of family or friends that all too often proves to be the tipping point.

Those who live on the streets of our country, often in makeshift accommodation of boxes and blankets, usually do so not through personal choice but as a result of relational breakdown. If the gospels are to be taken at face value, then Jesus himself was no stranger to this. ‘Foxes have holes, and the birds of the air have nests, but the Son of Man has nowhere to lay his head’ said Jesus. He understood all those who experience rejection – and he demonstrated, throughout his ministry, a consistent predisposition towards those living on the margins, the widow and the orphan, the diseased and the demon-possessed, the friendless and the homeless.

And whomsoever that homeless person should be today – the traumatised refugee from the civil war in Syria; the Palestinian whose house has been demolished to make way for an illegal Israeli settlement of the West Bank; the victim of catastrophic flooding in the Bay of Bengal; the Ebola survivor rejected by a superstitious family in Liberia; the gay teenager chucked out of the family home in the God-fearing Bible-belt of America; or the ‘Big Issue’ vendor we might prefer to ignore on our day-out shopping – God, at least, thinks no less of them than he does of those who will go quietly, and comfortably, and cosily to their beds this night.

Think on that, next time you hear the cry ‘Big Issue!’ Buy a copy, bring a smile to the vendor’s face – and start to make a difference.