IF YOU READ TheBAY REGULARLY, AND FOLLOW THE MARMALADE COOKERY SCHOOL RECIPES, YOU’LL KNOW WE HAD A LITTLE ATTACK OF NOSTALGIA LAST MONTH AND SHARED A RECIPE WE LEARNT IN INDIA. 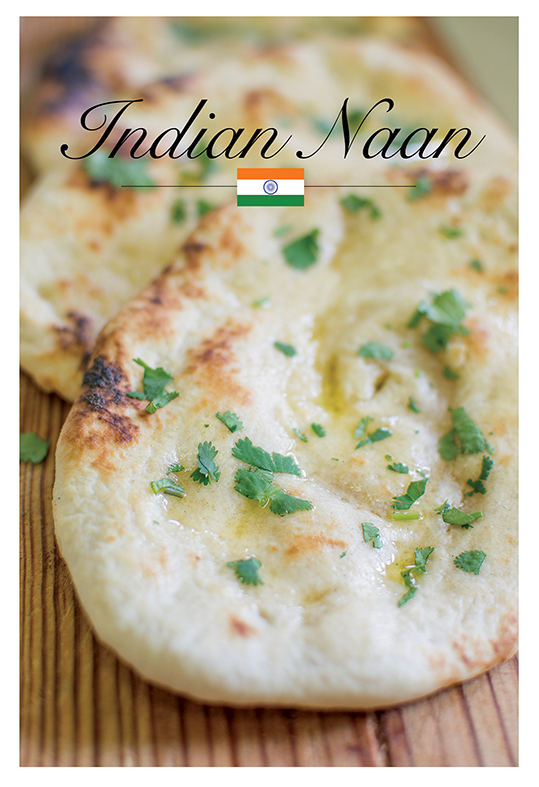 The recipe we shared was the famous Moti Mahal Butter Chicken, which had a long method which left me no time for the only side dish worthy of this curry…the all-mighty naan bread.

Traditionally, naan bread is a yeast leavened bread, shaped like a disc and slapped on to the wall of a hot tandoori oven. Since that might be a little hard to reproduce at home, we are replacing the tandoori oven with an oven stone; we’ll also give you a stove top alternative. So with no further ado here is my home baked version of this iconic flat bread.

1 tsp of dry yeast or 2 tsp of fresh yeast

A pinch of baking soda

2 ½ tbsp of thick yogurt (such as Greek)

Start by measuring the flour into a large bowl. If you are using fresh yeast put it into your bowl of flour. Use your fingertips to rub the yeast and flour together, as you do when making a crumble.  If you are using dried yeast simply add it to the flour and give it a mix.

TIP #1: You can get fresh yeast from the bakery in large supermarkets

Add the salt and sugar and a pinch of baking soda and stir everything together.

Now add the wet ingredients; the ghee, yogurt and water (pic 1). Combine all the ingredients with the help of a plastic dough scraper or a spoon. Once it starts to come together (pic 2) tip the bowl over onto the worktop, scraping all the bits of flour off your bowl, and knead the dough; without adding any more flour to your table as this will disturb the delicate flour/water balance. Knead it for about 10 minutes, the dough should become smooth, soft, supple and elastic and it shouldn’t feel tacky (pic 3).

TIP #2: Look for a not-too-wet dough. The dough will soften as it rises

When you are happy with your dough move it back to the bowl. Cover the dough and keep it in a warm place for three to four hours, until nearly double in volume (pic 4).

Once your dough has risen and is looking bubbling and light (pic 5) divide it into 6 (pic 6) and then shape into balls and lightly dust each one with flour (pic 7). Dust the work surface lightly with flour.

Make the naans one at a time. Dip your hands, including the backs of your hands and knuckles, in flour and shape your dough on the floured surface by rotating it and stretching it as you go (pic 8). Once you are done move it to the side and lightly cover it with a kitchen towel or cling film.

Tip #3: Please keep away from your rolling pin, your naan will never have nice bubbles if you use one 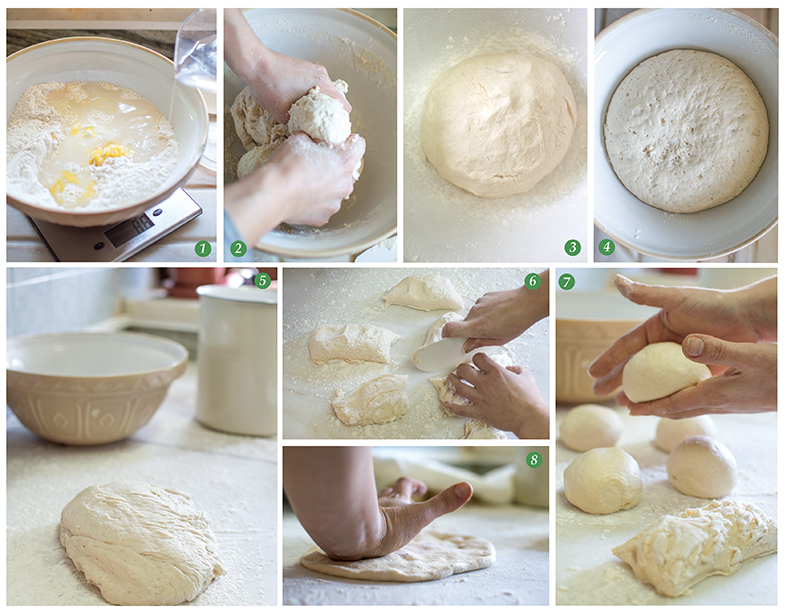 At least 1 hour before making the naans, place a baking stone either on the floor of the oven (for gas ovens), or on a rack in the lower third of the oven. Heat the oven as hot as possible. If you are making a true naan bread you need to fire up your tandoori oven… just kidding I mean your wood burning oven at this moment and get it as hot as you can.

TIP #4: If you don’t have a wood burning oven it is really important to have a pizza stone as the naans need to cook from the bottom up. You can get these in kitchen shops or online. Otherwise try a cast iron bake-stone like the ones used for Welsh cakes.

Lightly wet your hands and flip the naan between your palms.

TIP #5: The extra moisture will help puff up the dough in the oven

Carefully place one naan on your bake/pizza stone and place it into the oven. The naan should take two to three minutes to cook, depending upon your oven. The baked naan should be golden brown on top. In the meanwhile start shaping your next naan.

TIP #6: Try not to leave it in the oven for too long or it will become overcooked and crispy instead of soft and chewy

Take the naan out of the oven and brush lightly with ghee and sprinkle with any of your extra ingredients if using. Reserve the naan.

TIP #7: The best way to keep your naans warm and soft is to line the container with kitchen cloth, foil and finally a kitchen towel, placing the naans in the middle and folding the ends over. Butter each naan with ghee and place the buttered sides together as you stack them up

Wait two to three minutes before baking the next naan to give the oven a chance to regain lost heat. 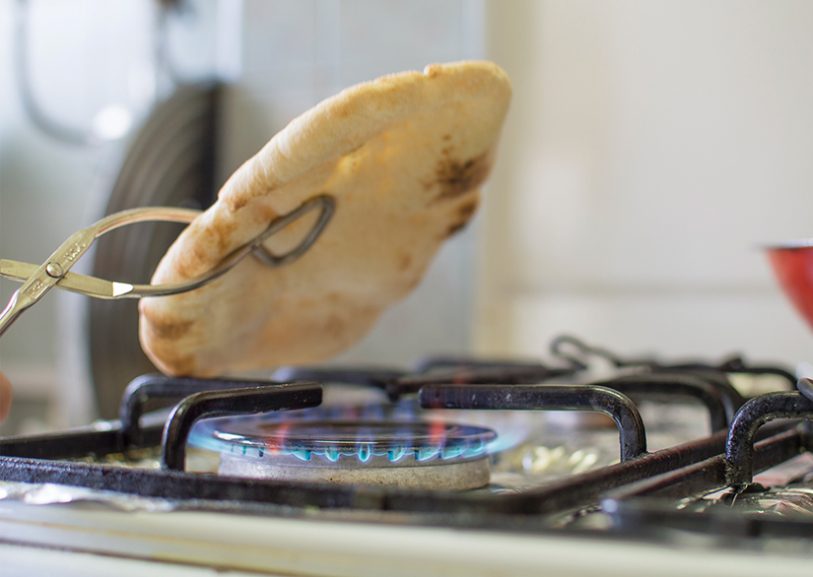 Follow the same shaping method as for the oven stone method but this time place the naan, wet side down on the pan and cover with a lid. Reduce the heat a tiny bit and allow it to cook for 30-45 seconds. The underside will golden to light brown and the naan will be easily released from the pan. You will see big bubbles on the surface of the naan.

Reduce the heat to medium, uncover and cook for another 30 seconds.

In the meanwhile start getting the next naan ready.

Remove the skillet from the heat and cook the other side of the naan over a direct flame (see pic above) of the gas burner (bubble side facing the flame) with the help of tongs. The naan usually puffs up, and some spots will get charred (which imparts the lovely smoky flavour). Remove from the heat and brush generously with melted ghee and top with any of your chosen toppings. Reserve as previously advised.

TIP #8: If you do not have a gas stove, and are cooking on electric, you can cook the naan on the skillet without flame roasting it. Once the bubbles form on the surface, flip it over on the pan, increase the heat to high and slowly press down on the naan with the spatula at different spots. The naan will start puffing up as it cooks. Remove from the skillet when the naan is golden brown, unevenly, and with spots at some places

(Ed’s note: If you don’t have last month’s magazine for the recipe for Moti Mahal Butter Chicken, you will find it on the website www.theswanseabay.co.uk)